The Jerusalem artichoke (Helianthus tuberosus), also called the sunroot, sunchoke, earth apple or topinambour, is a species of sunflower native to eastern North America, and found from Eastern Canada and Maine west to North Dakota, and south to northern Florida and Texas.[1] It is also cultivated widely across the temperate zone for its tuber, which is used as a root vegetable.[2]

It is a herbaceous perennial plant growing to 1.5–3 metres (4 ft 10 in–9 ft 10 in) tall with opposite leaves on the lower part of the stem becoming alternate higher up. The leaves have a rough, hairy texture and the larger leaves on the lower stem are broad ovoid-acute and can be up to 30 centimetres (12 in) long and the higher leaves smaller and narrower. 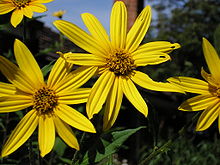 Despite its name, the Jerusalem artichoke has no relation to Jerusalem, and it is not a type of artichoke, even though both are members of the daisy family. The origin of the name is uncertain. Italian settlers in the USA called the plant girasole, the Italian word for sunflower because of its resemblance to the garden sunflower (note: both the sunflower and the sunchoke are part of the same genus: Helianthus). Over time the name girasole may have been changed to Jerusalem.[4] To avoid confusion, some people have recently started to refer to it as sunchoke or sunroot.[citation needed]

The artichoke part of the Jerusalem artichoke's name comes from the taste of its edible tuber. Samuel de Champlain, the French explorer, sent the first samples of the plant to France, noting that its taste was similar to an artichoke.[citation needed]

Jerusalem artichokes were first cultivated by the Native Americans long before the arrival of the Europeans; this extensive cultivation obscures the exact native range of the species.[1] The French explorer Samuel de Champlain found domestically grown plants at Cape Cod in 1605. The Jerusalem artichoke was titled 'best soup vegetable' in the 2002 Nice festival for the heritage of the French cuisine. 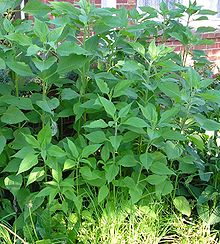 Young plants in a garden

Unlike most tubers, but in common with other members of the Asteraceae (including the artichoke), the tubers store the carbohydrate inulin (not to be confused with insulin) instead of starch. For this reason, Jerusalem artichoke tubers are an important source of fructose for industry[citation needed]. The crop yields are high, typically 16–20 tonnes/ha for tubers, and 18–28 tonnes/ha green weight for foliage. Jerusalem artichoke also has a great deal of unused potential as a producer of ethanol fuel, using inulin-adapted strains of yeast for fermentation.[2]

Jerusalem artichokes are easy to cultivate, which tempts gardeners to simply leave them completely alone to grow. However, the quality of the edible tubers degrades unless the plants are dug up and replanted in fertile soil. This can be a chore, as even a small piece of tuber will grow if left in the ground, making the hardy plant a potential weed. 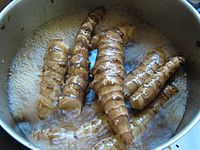 The tubers are sometimes used as a substitute for potatoes:[5] they have a similar consistency, and in their raw form have a similar texture, but a sweeter, nuttier flavor; raw and sliced thinly, they are fit for a salad. The carbohydrates give the tubers a tendency to become soft and mushy if boiled, but they retain their texture better when steamed. The inulin cannot be broken down by the human digestive system[6], which can cause flatulence and, in some cases, gastric pain. Gerard's Herbal, printed in 1621, quotes the English planter John Goodyer on Jerusalem artichokes:

"which way soever they be dressed and eaten, they stir and cause a filthy loathsome stinking wind within the body, thereby causing the belly to be pained and tormented, and are a meat more fit for swine than men."[7]

Jerusalem artichokes have 650 mg potassium per 1 cup (150g) serving. They are also high in iron, and contain 10-12% of the US RDA of fiber, niacin, thiamine, phosphorus and copper.[8]

Jerusalem artichokes can be used as animal feed, and, while they must be washed before being fed to most animals, pigs forage and safely eat them directly from the ground. The stalks and leaves can be harvested and used for silage, though cutting the tops greatly reduces the harvest of the roots.

In Baden-Württemberg, Germany, over 90 percent of the Jerusalem artichoke root is used to produce a spirit called "Topinambur" (see German Wikipedia article), "Topi" or "Rossler".[9]

In the 1980s, the Jerusalem artichoke also gained some notoriety when its seeds were planted by midwestern US farmers at the prodding of an agricultural pyramid scheme. There was little market for the tuber in that part of the US at the time, but farmers were assured that it would soon appear on the commodities market. Unfortunately, the only profits were realized by the initial distributors and the first few levels of farmers (who sold their seeds to subsequent levels of the pyramid). As a result many of the farms which had planted large quantities of the crop were ruined.[10][11]