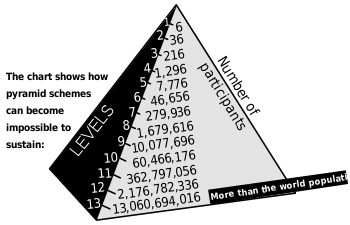 The unsustainable exponential progression of a classic pyramid scheme

A pyramid scheme is a non-sustainable business model that involves promising participants payment or services, primarily for enrolling other people into the scheme, rather than supplying any real investment or sale of products or services to the public. Pyramid schemes are a form of fraud.[1][2]

These types of schemes have existed for at least a century, some with variations to hide their true nature, and many people believe that multilevel marketing is also a pyramid scheme.[21][22][23][24]

A successful pyramid scheme combines a fake yet seemingly credible business with a simple-to-understand yet sophisticated-sounding money-making formula which is used for profit. The essential idea is that a "con artist" Mr. X, makes only one payment. To start earning, Mr. X has to recruit others like him who will also make one payment each. Mr. X gets paid out of receipts from those new recruits. They then go on to recruit others. As each new recruit makes a payment, Mr. X gets a cut. He is thus promised exponential benefits as the "business" expands.

Such "businesses" seldom involve sales of real products or services to which a monetary value might be easily attached. However, sometimes the "payment" itself may be a non-cash valuable. To enhance credibility, most such scams are well equipped with fake referrals, testimonials, and information. The flaw is that there is no end benefit. The money simply travels up the chain. Only the originator (sometimes called the "pharaoh") and a very few at the top levels of the pyramid make significant amounts of money. The amounts dwindle steeply down the pyramid slopes. Individuals at the bottom of the pyramid (those who subscribed to the plan, but were not able to recruit any followers themselves) end up with a deficit.

Prior instances of this scheme have been called the "Airplane Game" and the four tiers labelled as "captain," "co-pilot," "crew," and "passenger" to denote a person's level. Another instance was called the "Original Dinner Party" which labeled the tiers as "dessert," "main course," "side salad," and "appetizer." A person on the "dessert" course is the one at the top of the tree. Another variant, "Treasure Traders," variously used gemology terms such as "polishers," "stone cutters," etc. or gems like "rubies," "sapphires," "diamonds," etc.

Such schemes may try to downplay their pyramid nature by referring to themselves as "gifting circles" with money being "gifted." Popular schemes such as the "Women Empowering Women"[25] do exactly this.

Whichever euphemism is used, there are 15 total people in four tiers (1 + 2 + 4 + 8) in the scheme - with the Airplane Game as the example, the person at the top of this tree is the "captain," the two below are "co-pilots," the four below are "crew," and the bottom eight joiners are the "passengers."

The eight passengers must each pay (or "gift") a sum (e.g. $1000) to join the scheme. This sum (e.g. $8000) goes to the captain who leaves, with everyone remaining moving up one tier. There are now two new captains so the group splits in two with each group requiring eight new passengers. A person who joins the scheme as a passenger will not see a return until they advance through the crew and co-pilot tiers and exit the scheme as a captain. Therefore, the participants in the bottom 3 tiers of the pyramid lose their money if the scheme collapses.

If a person is using this model as a scam, the confidence trickster would make the lion's share of the money. They would do this by filling in the first 3 tiers (with 1, 2, and 4 people) with phony names, ensuring they get the first 7 payouts, at 8 times the buy-in sum, without paying a single penny themselves. So if the buy-in were $1000, they would receive $8,000, paid for by the first 8 investors. They would continue to buy in underneath the real investors, and promote and prolong the scheme for as long as possible to allow them to skim even more from it before it collapses.

Although the 'Captain' is the person at the top of the tree, having received the payment from the 8 paying passengers, once he or she leaves the scheme is able to re-enter the pyramid as a 'Passenger' and hopefully recruit enough to reach captain again, thereby earning a second payout.

Matrix schemes use the same fraudulent non-sustainable system as a pyramid; here, the participants pay to join a waiting list for a desirable product which only a fraction of them can ever receive. Since matrix schemes follow the same laws of geometric progression as pyramids, they are subsequently as doomed to collapse. Such schemes operate as a queue, where the person at head of the queue receives an item such as a television, games console, digital camcorder, etc. when a certain number of new people join the end of the queue. For example ten joiners may be required for the person at the front to receive their item and leave the queue. Each joiner is required to buy an expensive but potentially worthless item, such as an e-book, for their position in the queue. The scheme organizer profits because the income from joiners far exceeds the cost of sending out the item to the person at the front. Organizers can further profit by starting a scheme with a queue with shill names that must be cleared out before genuine people get to the front. The scheme collapses when no more people are willing to join the queue. Schemes may not reveal, or may attempt to exaggerate, a prospective joiner's queue position which essentially means the scheme is a lottery. Some countries have ruled that matrix schemes are illegal on that basis.

The network marketing or multi-level marketing (abbreviated MLM) business has become associated with pyramid schemes as "Some schemes may purport to sell a product, but they often simply use the product to hide their pyramid structure."[26] and the fact while some people call MLMs in general "pyramid selling"[27][28][29][30][31] others use the term to denote an illegal pyramid scheme masquerading as an MLM.[32]

The United States Federal Trade Commission (FTC) warns "Not all multilevel marketing plans are legitimate. Some are pyramid schemes. It’s best not to get involved in plans where the money you make is based primarily on the number of distributors you recruit and your sales to them, rather than on your sales to people outside the plan who intend to use the products."[33] and states that research is your best tool and gives eight steps to follow:

Some believe MLMs in general are nothing more than legalized pyramid schemes.[21][22][23][24] Even in reputable MLM companies, such as AMWAY, the top earners make up to 95% of their income from tapes and other motivational materials sold to the lower levels.[citation needed]

Franchise fraud (or 'franchise churning') is defined by the U.S. Federal Bureau of Investigation as a pyramid scheme. The FBI website states:

pyramid schemes :—also referred to as franchise fraud or chain referral schemes—are marketing and investment frauds in which an individual is offered a distributorship or franchise to market a particular product. The real profit is earned, not by the sale of the product, but by the sale of new distributorships. Emphasis on selling franchises rather than the product eventually leads to a point where the supply of potential investors is exhausted and the pyramid collapses.[34]

One of Pearlasia Gamboa’s (president of the micronation of Melchizedek) franchise fraud schemes was described by the Italian newspaper La Repubblica as “one of the most diabolical international scams ever devised in recent years.”[35]

In 2003, the United States Federal Trade Commission (FTC) disclosed what it called an internet-based "pyramid scam." Its complaint states that customers would pay a registration fee to join a program that called itself an "internet mall" and purchase a package of goods and services such as internet mail, and that the company offered "significant commissions" to consumers who purchased and resold the package. The FTC alleged that the company's program was instead and in reality a pyramid scheme that did not disclose that most consumers' money would be kept, and that it gave affiliates material that allowed them to scam others.[36]

WinCapita was a scheme run by Finnish criminals that involved about €100 million.

The 1997 rebellion in Albania was partially motivated by the collapse of pyramid schemes.

In early 2006, Ireland was hit by a wave of schemes with major activity in Cork and Galway. Participants were asked to contribute €20,000 each to a "Liberty" scheme which followed the classic eight-ball model. Payments were made in Munich, Germany to skirt Irish tax laws concerning gifts. Spin-off schemes called "Speedball" and "People in Profit" prompted a number of violent incidents and calls were made by politicians to tighten existing legislation.[37] Ireland has launched a website to better educate consumers to pyramid schemes and other scams.[38]

On 12 November 2008, riots broke out in the municipalities of Pasto, Tumaco, Popayan and Santander de Quilichao, Colombia after the collapse of several pyramid schemes. Thousands of victims had invested their money in pyramids that promised them extraordinary interest rates. The lack of regulation laws allowed those pyramids to grow excessively during several years. Finally, after the riots, the Colombian government was forced to declare the country in a state of economic emergency to seize and stop those schemes. Several of the pyramid's managers were arrested, and are being prosecuted for the crime of "illegal massive money reception."[39]

The Kyiv Post reported on 26 November 2008 that American citizen Robert Fletcher (Robert T. Fletcher III; aka "Rob") was arrested by the SBU (Ukraine State Police) after being accused by Ukrainian investors of running a Ponzi scheme and associated pyramid scam netting US$20 million. (The Kiev Post also reports that some estimates are as high as US$150M.)

Throughout 2010 and 2011 a number of authorities around the world including the Australian Competition and Consumer Commission, the Bank of Namibia and the Central Bank of Lesotho have declared TVI Express to be a pyramid scheme. TVI Express, operated by Tarun Trikha from India has apparently recruited hundreds of thousands of "investors", very few of whom, it is reported, have recouped any of their investment.[40][41][42][43][44]