Foodborne illness (also foodborne disease and colloquially referred to as food poisoning)[1] is any illness resulting from the consumption of contaminated food, pathogenic bacteria, viruses, or parasites that contaminate food,[2] as well as chemical or natural toxins such as poisonous mushrooms. 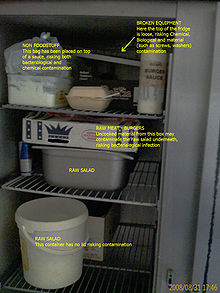 Poorly stored food in a refrigerator

Foodborne illness usually arises from improper handling, preparation, or food storage. Good hygiene practices before, during, and after food preparation can reduce the chances of contracting an illness. There is a consensus in the public health community that regular hand-washing is one of the most effective defenses against the spread of foodborne illness. The action of monitoring food to ensure that it will not cause foodborne illness is known as food safety. Foodborne disease can also be caused by a large variety of toxins that affect the environment. For foodborne illness caused by chemicals, see Food contaminants.

Foodborne illness can also be caused by pesticides or medicines in food and naturally toxic substances like poisonous mushrooms or reef fish.

Bacteria is a common cause of foodborne illness. In the United Kingdom during 2000 the individual bacteria involved were as follows: Campylobacter jejuni 77.3%, Salmonella 20.9%, Escherichia coli O157:H7 1.4%, and all others less than 0.1%.[3] In the past, bacterial infections were thought to be more prevalent because few places had the capability to test for norovirus and no active surveillance was being done for this particular agent. Symptoms for bacterial infections are delayed because the bacteria need time to multiply. They are usually not seen until 12–72 hours or more after eating contaminated food.

Most common bacterial foodborne pathogens are:

Other common bacterial foodborne pathogens are:

In addition to disease caused by direct bacterial infection, some foodborne illnesses are caused by exotoxins which are excreted by the cell as the bacterium grows. Exotoxins can produce illness even when the microbes that produced them have been killed. Symptoms typically appear after 24 hours depending on the amount of toxin ingested.

Pseudoalteromonas tetraodonis, certain species of Pseudomonas and Vibrio, and some other bacteria, produce the lethal tetrodotoxin, which is present in the tissues of some living animal species rather than being a product of decomposition.

The term alimentary mycotoxicoses refers to the effect of poisoning by Mycotoxins through food consumption. Mycotoxins sometimes have important effects on human and animal health. For example, an outbreak which occurred in the UK in 1960 caused the death of 100,000 turkeys which had consumed aflatoxin-contaminated peanut meal. In the USSR in World War II, 5,000 people died due to Alimentary Toxic Aleukia (ALA).[9] The common foodborne Mycotoxins include: 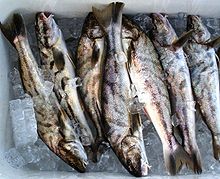 Prevention is mainly the role of the state, through the definition of strict rules of hygiene and a public services of veterinary surveying of animal products in the food chain, from farming to the transformation industry and delivery (shops and restaurants). This regulation includes:

In August 2006, the United States Food and Drug Administration approved Phage therapy which involves spraying meat with viruses that infect bacteria, and thus preventing infection. This has raised concerns, because without mandatory labelling consumers would not be aware that meat and poultry products have been treated with the spray.[34]

At home, prevention mainly consists of good food safety practices. Many forms of bacterial poisoning can be prevented even if food is contaminated by cooking it sufficiently, and either eating it quickly or refrigerating it effectively[citation needed]. Many toxins, however, are not destroyed by heat treatment.

Viral infections make up perhaps one third of cases of food poisoning in developed countries. In the US, more than 50% of cases are viral and noroviruses are the most common foodborne illness, causing 57% of outbreaks in 2004. Foodborne viral infection are usually of intermediate (1–3 days) incubation period, causing illnesses which are self-limited in otherwise healthy individuals, and are similar to the bacterial forms described above.

Most foodborne parasites are zoonoses.

Several foods can naturally contain toxins, many of which are not produced by bacteria. Plants in particular may be toxic; animals which are naturally poisonous to eat are rare. In evolutionary terms, animals can escape being eaten by fleeing; plants can use only passive defenses such as poisons and distasteful substances, for example capsaicin in chili peppers and pungent sulfur compounds in garlic and onions. Most animal poisons are not synthesised by the animal, but acquired by eating poisonous plants to which the animal is immune, or by bacterial action.

Some plants contain substances which are toxic in large doses, but have therapeutic properties in appropriate dosages.

An early theory on the causes of food poisoning involved ptomaines (from Greek ptōma, "fall, fallen body, corpse"), alkaloids found in decaying animal and vegetable matter. While some alkaloids do cause poisoning, the discovery of bacteria left the ptomaine theory obsolete, though as recently as 1882 the ptomaine was thought of as bacteria, while cadaverine and putrescine "special alkaloids" produced by the "comma bacillus" [37].

The delay between consumption of a contaminated food and appearance of the first symptoms of illness is called the incubation period. This ranges from hours to days (and rarely months or even years, such as in the case of Listeriosis or Creutzfeldt-Jacob disease), depending on the agent, and on how much was consumed. If symptoms occur within 1–6 hours after eating the food, it suggests that it is caused by a bacterial toxin or a chemical rather than live bacteria.

The long incubation period of many foodborne illnesses tends to cause sufferers to attribute their symptoms to "stomach flu".

During the incubation period, microbes pass through the stomach into the intestine, attach to the cells lining the intestinal walls, and begin to multiply there. Some types of microbes stay in the intestine, some produce a toxin that is absorbed into the bloodstream, and some can directly invade the deeper body tissues. The symptoms produced depend on the type of microbe.[38]

The infectious dose is the amount of agent that must be consumed to give rise to symptoms of foodborne illness, and varies according to the agent and the consumer's age and overall health. In the case of Salmonella a relatively large inoculum of 1 million to 1 billion organisms is necessary to produce symptoms in healthy human volunteers [1], as Salmonellae are very sensitive to acid. An unusually high stomach pH level (low acidity) greatly reduces the number of bacteria required to cause symptoms by a factor of between 10 and 100.

In Australia, there are an estimated 5.4 million cases of food-borne illness every year, causing:[43]

The vast majority of reported cases of foodborne illness occur as individual or sporadic cases. The origin of most sporadic cases is undetermined. In the United States, where people eat outside the home frequently, most outbreaks (58%) originate from commercial food facilities (2004 FoodNet data). An outbreak is defined as occurring when two or more people experience similar illness after consuming food from a common source.

Often, a combination of events contributes to an outbreak, for example, food might be left at room temperature for many hours, allowing bacteria to multiply which is compounded by inadequate cooking which results in a failure to kill the dangerously elevated bacterial levels.

Outbreaks are usually identified when those affected know each other. However, more and more, outbreaks are identified by public health staff from unexpected increases in laboratory results for certain strains of bacteria. Outbreak detection and investigation in the United States is primarily handled by local health jurisdictions and is inconsistent from district to district. It is estimated that 1–2% of outbreaks are detected.

It is difficult to estimate the global incidence of foodborne disease, but it has been reported that in the year 2000 about 2.1 million people died from diarrhoeal diseases. Many of these cases have been attributed to contamination of food and drinking water. Additionally, diarrhea is a major cause of malnutrition in infants and young children.

Even in industrialized countries, up to 30% of the population of people have been reported to suffer from foodborne diseases every year. In the U.S, around 76 million cases of foodborne diseases, which resulted in 325,000 hospitalizations and 5,000 deaths, are estimated to occur each year. Developing countries in particular are worst affected by foodborne illnesses due to the presence of a wide range of diseases, including those caused by parasites. Foodborne illnesses can and did inflict serious and extensive harm on society. In 1994, an outbreak of salmonellosis due to contaminated ice cream occurred in the USA, affecting an estimated 224,000 persons. In 1988, an outbreak of hepatitis A, resulting from the consumption of contaminated clams, affected some 300,000 individuals in China.

Food contamination creates an enormous social and economic strain on societies. In the U.S., diseases caused by the major pathogens alone are estimated to cost up to US $35 billion annually (1997) in medical costs and lost productivity. The re-emergence of cholera in Peru in 1991 resulted in the loss of US $500 million in fish and fishery product exports that year.

In postwar Aberdeen (1964) a large scale (>400 cases) outbreak of Typhoid occurred, this was caused by contaminated corned beef which had been imported from Argentina[44] The corned beef was placed in cans and because the cooling plant had failed, cold river water from the Plate estuary was used to cool the cans. One of the cans had a defect and the meat inside was contaminated. This meat was then sliced using a meat slicer in a shop in Aberdeen, and a lack of cleaning the machinery lead to spreading the contamination to other meats cut in the slicer. These meats were then eaten by the people of Aberdeen who then became ill.

In the UK serious outbreaks of food-borne illness since the 1970s prompted key changes in UK food safety law. These included the death of 19 patients in the Stanley Royd Hospital outbreak [2] and the bovine spongiform encephalopathy (BSE, mad cow disease) outbreak identified in the 1980s. The death of 17 people in the 1996 Wishaw outbreak of E. coli O157 [3] was a precursor to the establishment of the Food Standards Agency which, according to Tony Blair in the 1998 white paper A Force for Change Cm 3830 "would be powerful, open and dedicated to the interests of consumers".

In 2001, the Center for Science in the Public Interest petitioned the United States Department of Agriculture to require meat packers to remove spinal cords before processing cattle carcasses for human consumption, a measure designed to lessen the risk of infection by variant Creutzfeldt-Jakob disease. The petition was supported by the American Public Health Association, the Consumer Federation of America, the Government Accountability Project, the National Consumers League, and Safe Tables Our Priority. This was opposed by the National Cattlemen's Beef Association, the National Renderers Association, the National Meat Association, the Pork Producers Council, sheep raisers, milk producers, the Turkey Federation, and eight other organizations from the animal-derived food industry. This was part of a larger controversy regarding the United States' violation of World Health Organization proscriptions to lessen the risk of infection by variant Creutzfeldt-Jakob disease.[citation needed]

None of the US Department of Health and Human Services targets[47] regarding incidence of foodborne infections were reached in 2007.[48]

World Health Organization Food Safety Department
The WHO provides scientific advice for organizations and the public on issues concerning the safety of food. It serves as a medium linking the food safety systems in countries around the world. Food safety is currently one of WHO's top ten priorities. Food Safety is one of the major issues in our world today, and the Organization calls for more systematic and aggressive steps to be taken to significantly reduce the risk of foodborne diseases.
The Department of Food Safety, Zoonoses and Foodborne Diseases
The Department of Food Safety, Zoonoses and Foodborne Diseases is a department under the WHO. Its mission is to reduce the serious negative impact of foodborne diseases worldwide. According to the WHO website, food and waterborne diarrhoeal diseases are leading causes of illness and death in less developed countries, killing approximately 3.8 million people annually, most of whom are children.

This article incorporates public domain material from websites or documents of the Centers for Disease Control and Prevention.