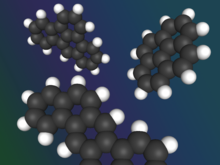 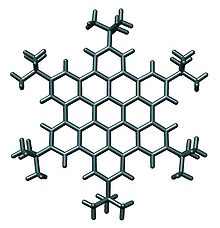 Crystal structure of a hexa-tert-butyl derivatized hexa-peri-hexabenzo(bc,ef,hi,kl,no,qr)coronene, reported by Klaus Müllen and co-workers.[1] The tert-butyl groups make this compound soluble in common solvents such as hexane, in which the unsubstituted PAH is insoluble.

Polycyclic aromatic hydrocarbons (PAHs), also known as poly-aromatic hydrocarbons or polynuclear aromatic hydrocarbons, are potent atmospheric pollutants that consist of fused aromatic rings and do not contain heteroatoms or carry substituents.[2] Naphthalene is the simplest example of a PAH. PAHs occur in oil, coal, and tar deposits, and are produced as byproducts of fuel burning (whether fossil fuel or biomass). As a pollutant, they are of concern because some compounds have been identified as carcinogenic, mutagenic, and teratogenic. PAHs are also found in cooked foods. Studies have shown that high levels of PAHs are found, for example, in meat cooked at high temperatures such as grilling or barbecuing, and in smoked fish.[3][4][5]

They are also found in the interstellar medium, in comets, and in meteorites and are a candidate molecule to act as a basis for the earliest forms of life.[6] In graphene the PAH motif is extended to large 2D sheets.

Polycyclic aromatic hydrocarbons are lipophilic, meaning they mix more easily with oil than water. The larger compounds are less water-soluble and less volatile (i.e., less prone to evaporate). Because of these properties, PAHs in the environment are found primarily in soil, sediment and oily substances, as opposed to in water or air. However, they are also a component of concern in particulate matter suspended in air.

PAHs are one of the most widespread organic pollutants. In addition to their presence in fossil fuels they are also formed by incomplete combustion of carbon-containing fuels such as wood, coal, diesel, fat, tobacco, and incense.[8] Different types of combustion yield different distributions of PAHs in both relative amounts of individual PAHs and in which isomers are produced. Thus, coal burning produces a different mixture than motor-fuel combustion or a forest fire, making the compounds potentially useful as indicators of the burning history. Hydrocarbon emissions from fossil fuel-burning engines are regulated in developed countries.[9]

Although the health effects of individual PAHs are not exactly alike, the following 17 PAHs are considered as a group in this profile issued by the Agency for Toxic Substances and Disease Registry (ATSDR):[10]

PAHs toxicity is very structurally dependent, with isomers (PAHs with the same formula and number of rings) varying from being nontoxic to being extremely toxic. Thus, highly carcinogenic PAHs may be small or large. One PAH compound, benzo[a]pyrene, is notable for being the first chemical carcinogen to be discovered (and is one of many carcinogens found in cigarette smoke). The EPA has classified seven PAH compounds as probable human carcinogens: benz[a]anthracene, benzo[a]pyrene, benzo[b]fluoranthene, benzo[k]fluoranthene, chrysene, dibenz(a,h)anthracene, and indeno(1,2,3-cd)pyrene.

High prenatal exposure to PAH is associated with lower IQ and childhood asthma.[12] The Center for Children's Environmental Health reports studies that demonstrate that exposure to PAH pollution during pregnancy is related to adverse birth outcomes including low birth weight, premature delivery, and heart malformations. Cord blood of exposed babies shows DNA damage that has been linked to cancer. Follow-up studies show a higher level of developmental delays at age three, lower scores on IQ tests and increased behaviorial problems at ages six and eight.[13]

The simplest PAHs, as defined by the International Union of Pure and Applied Chemistry (IUPAC) (G.P Moss, IUPAC nomenclature for fused-ring systems), are phenanthrene and anthracene, which both contain three fused aromatic rings. Smaller molecules, such as benzene, are not PAHs.

PAHs may contain four-, five-, six- or seven-member rings, but those with five or six are most common. PAHs composed only of six-membered rings are called alternant PAHs. Certain alternant PAHs are called benzenoid PAHs. The name comes from benzene, an aromatic hydrocarbon with a single, six-membered ring. These can be benzene rings interconnected with each other by single carbon-carbon bonds and with no rings remaining that do not contain a complete benzene ring.

The set of alternant PAHs is closely related to a set of mathematical entities called polyhexes, which are planar figures composed by conjoining regular hexagons of identical size.

PAHs containing up to six fused aromatic rings are often known as "small" PAHs, and those containing more than six aromatic rings are called "large" PAHs. Due to the availability of samples of the various small PAHs, the bulk of research on PAHs has been of those of up to six rings. The biological activity and occurrence of the large PAHs does appear to be a continuation of the small PAHs. They are found as combustion products, but at lower levels than the small PAHs due to the kinetic limitation of their production through addition of successive rings. In addition, with many more isomers possible for larger PAHs, the occurrence of specific structures is much smaller.

PAHs possess very characteristic UV absorbance spectra. These often possess many absorbance bands and are unique for each ring structure. Thus, for a set of isomers, each isomer has a different UV absorbance spectrum than the others. This is particularly useful in the identification of PAHs. Most PAHs are also fluorescent, emitting characteristic wavelengths of light when they are excited (when the molecules absorb light). The extended pi-electron electronic structures of PAHs lead to these spectra, as well as to certain large PAHs also exhibiting semi-conducting and other behaviors.

Aqueous solubility decreases approximately one order of magnitude for each additional ring.

Although PAHs clearly are aromatic compounds, the degree of aromaticity can be different for each ring segment. According to Clar's rule (formulated by Erich Clar in 1964)[14] for PAHs the resonance structure with the most disjoint aromatic п-sextets—i.e. benzene-like moieties—is the most important for the characterization of the properties.[15]

For example, in phenanthrene (1) one Clar structure has two sextets at the extremities, while the other resonance structure has just one central sextet. Therefore in this molecule the outer rings are firmly aromatic while its central ring is less aromatic and therefore more reactive. In contrast, in anthracene (2) the number of sextets is just one and aromaticity spreads out. This difference in number of sextets is reflected in the UV absorbance spectra of these two isomers. Phenanthrene has a highest wavelength absorbance around 290 nm, while anthracene has highest wavelength bands around 380 nm. Three Clar structures with two sextets are present in chrysene (3) and by superposition the aromaticity in the outer ring is larger than in the inner rings. Another relevant Clar hydrocarbon is zethrene. 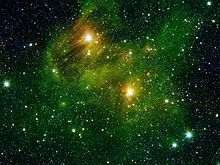 Two extremely bright stars illuminate a mist of PAHs in this Spitzer image.

In January 2004 (at the 203rd Meeting of the American Astronomical Society), it was reported[16] that a team led by A. Witt of the University of Toledo, Ohio studied ultraviolet light emitted by the Red Rectangle nebula and found the spectral signatures of anthracene and pyrene (no other such complex molecules had ever before been found in space). This discovery was considered as a controversial[17] confirmation of a hypothesis that as nebulae of the same type as the Red Rectangle approach the ends of their lives, convection currents cause carbon and hydrogen in the nebulae's core to get caught in stellar winds, and radiate outward. As they cool, the atoms supposedly bond to each other in various ways and eventually form particles of a million or more atoms. Witt and his team inferred[16] that since they discovered PAHs—which may have been vital in the formation of early life on Earth—in a nebula, by necessity they must originate in nebulae.[17] More recently, fullerenes (or "buckyballs"), have been detected in other nebulae.[18] Fullerenes are also implicated in the origin of life; according to astronomer Letizia Stanghellini, "It’s possible that buckyballs from outer space provided seeds for life on Earth.”[19]