Benzo(a)pyrene
The correct title of this article is Benzo[a]pyrene. The substitution or omission of any < > [ ] { } is due to technical restrictions.

Benzo[a]pyrene, C20H12, is a five-ring polycyclic aromatic hydrocarbon whose metabolites are mutagenic and highly carcinogenic. Benzo[a]pyrene is listed as a Group 1 carcinogen by the IARC. It belongs to a class of polycyclic aromatic compounds known as benzopyrenes, which consist of a benzene ring fused to a pyrene molecule. Benzo[a]pyrene is a product of incomplete combustion at temperatures between 300 and 600 °C (572 and 1,112 °F). Benzo[a]pyrene was determined in 1933 to be the component of coal tar responsible for the first recognized occupation-associated cancers, the sooty warts (cancers of the scrotum) suffered by chimney sweeps in 18th century England. In the 19th century, high incidences of skin cancers were noted among fuel industry workers. By the early 20th century, the toxicity of benzo[a]pyrene was demonstrated when malignant skin tumors were produced in laboratory animals by repeatedly painting them with coal tar. When the body's metabolism attempts to remove Benzo[a]pyrene by converting into a water soluble compound for easier excretion. The resulting diol epoxide, however, reacts with and binds to DNA resulting in mutations which can lead to cancer.

Benzo[a]pyrene is found in coal tar, in automobile exhaust fumes (especially from diesel engines), in all smoke resulting from the combustion of organic material (including cigarette smoke), and in charbroiled food. Recent studies have revealed that levels of benzo[a]pyrene in burnt toast are significantly higher than once thought,[citation needed] although it is unproven whether burnt toast is itself carcinogenic. Cooked meat products, regular consumption of which has been epidemiologically associated with increased levels of colon cancer[1] (although this in itself does not prove carcinogenicity),[2] have been shown to contain up to 4 ng/g of benzo[a]pyrene,[3] and up to 5.5 ng/g in fried chicken[4] and 62.6 ng/g in overcooked charcoal barbecued beef.[5] 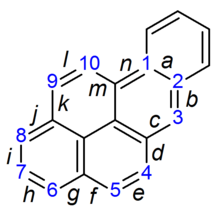 Benzo[a]pyrene, showing the base pyrene ring and numbering and ring fusion locations according to IUPAC nomenclature of organic chemistry.

A vast number of studies over the previous three decades have documented links between benzo[a]pyrene and cancers. It has been more difficult to link cancers to specific benzo[a]pyrene sources, especially in humans, and difficult to quantify risks posed by various methods of exposure (inhalation or ingestion). Researchers at Kansas State University recently discovered a link between vitamin A deficiency and emphysema in smokers.[6] Benzo[a]pyrene was found to be behind the link, since it induces vitamin A deficiency in rats.

In 1996, a study was published that provided the clear molecular evidence conclusively linking components in tobacco smoke to lung cancer.[7] Benzo[a]pyrene, found in tobacco smoke (including cigarette smoke), was shown to cause genetic damage in lung cells that was identical to the damage observed in the DNA of most malignant lung tumours.

A 2001 National Cancer Institute study found levels of benzo[a]pyrene to be significantly higher in foods that were cooked well-done on the barbecue, particularly steaks, chicken with skin, and hamburgers.[citation needed][8] Japanese scientists showed that cooked beef contains mutagens, chemicals that are capable of altering the chemical structure of DNA[citation needed]. However, the foods themselves are not necessarily carcinogenic, even if they contain trace amounts of carcinogens, because the gastrointestinal tract protects itself against carcinomas by shedding its outer layer continuously. Furthermore, detoxification enzymes, such as cytochromes P450 have increased activities in the gut due to the normal requirement for protection from food-borne toxins. Thus in most cases small amounts of benzo[a]pyrene are metabolized by gut enzymes prior to being passed on to the blood. The lungs are not protected in either of these manners. 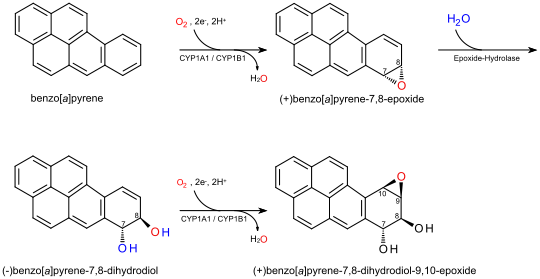 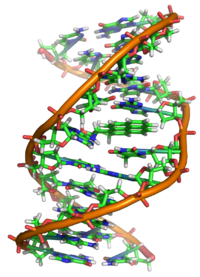 A DNA adduct (at center) of benzo[a]pyrene, the major mutagen in tobacco smoke.[10]

Properly speaking, benzo[a]pyrene is a procarcinogen, meaning that the mechanism of carcinogenesis of benzo[a]pyrene depends on enzymatic metabolism of benzo[a]pyrene to the ultimate mutagen, benzo[a]pyrene diol epoxide, pictured above at right. This molecule intercalates in DNA, covalently bonding to the nucleophilic guanine nucleobases at the N2 position. X-ray crystallographic and nuclear magnetic resonance structure studies show that this binding distorts the DNA,[11] inducing mutations by perturbing the double-helical DNA structure. This disrupts the normal process of copying DNA and induces mutations, which explains the occurrence of cancer after exposure. This mechanism of action is similar to that of aflatoxin which binds to the N7 position of guanine.[12]

There are indications that benzo[a]pyrene diol epoxide specifically targets the protective p53 gene.[13] This gene is a transcription factor that regulates the cell cycle and hence functions as a tumor suppressor. By inducing G (guanine) to T (thymidine) transversions in transversion hotspots within p53, there is a probability that benzo[a]pyrene diol epoxide inactivates the tumor suppression ability in certain cells, leading to cancer.

Benzo[a]pyrene-7,8-dihydrodiol-9,10-epoxide is the carcinogenic product of three enzymatic reactions:[14]

Benzo[a]pyrene induces cytochrome P4501A1 (CYP1A1) by binding to the AHR (aryl hydrocarbon receptor) in the cytosol.[16] Upon binding the transformed receptor translocates to the nucleus where it dimerises with ARNT (aryl hydrocarbon receptor nuclear translocator) and then binds xenobiotic response elements (XREs) in DNA located upstream of certain genes. This process increases transcription of certain genes, notably CYP1A1, followed by increased CYP1A1 protein production.[16] This process is similar to induction of CYP1A1 by certain polychlorinated biphenyls and dioxins.

Recently, benzo[a]pyrene has been found to activate a transposon, LINE1, in humans.[17]