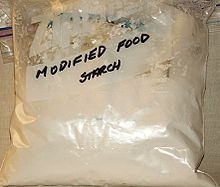 Modified starch, also called starch derivatives, are prepared by physically, enzymatically, or chemically treating native starch, thereby changing the properties of the starch.[1] Modified starches are used in practically all starch applications, such as in food products as a thickening agent, stabilizer or emulsifier; in pharmaceuticals as a disintegrant; as binder in coated paper. They are also used in many other applications.[2]

Other treatments producing modified starch (with different E numbers) are:

Other starch derivates are glucose, high fructose syrup and glucose syrups, starch degraded with amylase enzyme to make a sweetener.

Examples of use and functionality of modified starch

Pre-gelatinized starch is used to thicken instant desserts, allowing the food to thicken with the addition of cold water or milk. Similarly, cheese sauce granules (such as in Macaroni and Cheese or lasagna) or gravy granules may be thickened with boiling water without the product going lumpy. Commercial pizza toppings containing modified starch will thicken when heated in the oven, keeping them on top of the pizza, and then become runny when cooled.

A suitably modified starch is used as a fat substitute for low-fat versions of traditionally fatty foods, e.g., reduced-fat hard salami having about 1/3 the usual fat content. For such uses, it is an alternative to the product Olestra.

Modified starch is added to frozen products to prevent them from dripping when defrosted. Modified starch, bonded with phosphate, allows the starch to absorb more water and keeps the ingredients together. Modified starch acts as an emulsifier for French dressing by enveloping oil droplets and suspending them in the water. Acid-treated starch forms the shell of jelly beans. Oxidized starch increases the stickiness of batter.

Carboxymethylated starches are used as a wallpaper adhesive, as textile printing thickener, as tablet disintergrant, excipient, in pharmaceutical industry.

Modified starch should not be confused with genetically modified starch, which refers to starch from genetically engineered plants, which have been genetically modified to produce novel carbohydrates which might not naturally occur in the plant species being harvested.[citation needed][dubious – discuss] The modification in this sense refers to the genetic engineering of the plant DNA, and not the later processing or treatment of the starch or starch granules.

Genetically modified starch is of interest in the manufacture of biodegradable polymers and noncellulose feedstock in the paper industry, as well as the creation of new food additives.