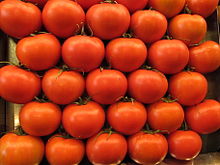 Umami is a loanword from the Japanese umami (うまみ ?) meaning "pleasant savory taste".[6] This particular writing was chosen by Professor Kikunae Ikeda from umai (うまい) "delicious" and mi (味) "taste". In Japan, while normally written in hiragana, the kanji (Chinese characters) 旨味 are used for a more general meaning, when a particular food is considered to be delicious.

For a long time, scientists debated whether umami was indeed a basic taste; but in 1985 at the first Umami International Symposium in Hawaii, the term Umami was recognized as the scientific term to describe the taste of glutamates and nucleotides.[7] Now it is widely accepted as the fifth basic taste. Umami represents the taste of the amino acid L-glutamate and 5’-ribonucleotides such as guanosine monophosphate (GMP) and inosine monophosphate (IMP).[8] Although it can be described as a pleasant "brothy" or "meaty" taste with a long lasting, mouthwatering and coating sensation over the tongue, umami has no translation. Umami is known as umami in almost all major languages, including English, Portuguese, Spanish, French, etc. The sensation of umami is due to the detection of the carboxylate anion of glutamate in specialized receptor cells present on the human and animal tongue.[9][10] Its fundamental effect is the ability to balance taste and round the total flavor of a dish. Umami clearly enhances the palatability of a wide variety of foods (for review Beauchamp, 2009).[11] Glutamate in acid form (Glutamic acid) imparts little umami taste; whereas the salts of glutamic acid, such as monosodium glutamate, can easily ionize and give the characteristic umami taste. GMP and IMP amplify the taste intensity of glutamate.[10][12]

Glutamate has a long history in cooking.[13] Fermented fish sauces (garum), rich in glutamate, were already used in ancient Rome.[14] In the late 1800s, chef Auguste Escoffier, who opened what was the most glamorous, expensive, and revolutionary restaurant in Paris, created meals that combined umami with salty, sour, sweet and bitter tastes.[15] He had not, however, known the chemical source for this unique quality.

Umami was not properly identified until 1908 by the scientist Kikunae Ikeda,[16] a Professor of the Tokyo Imperial University. He found that glutamate was responsible for the palatability of the broth from kombu seaweed. He noticed that the taste of kombu dashi was distinct from sweet, sour, bitter and salty and named it umami.

Later, a disciple of professor Ikeda, Shintaro Kodama, discovered in 1913 that dried bonito flakes contained another umami substance.[17] This was the ribonucleotide IMP. In 1957, Akira Kuninaka realized that the ribonucleotide GMP present in shiitake mushrooms also conferred the umami taste.[18] One of Kuninaka's most important discoveries was the synergistic effect between ribonucleotides and glutamate. When foods rich in glutamate are combined with ingredients that have ribonucleotides, the resulting taste intensity is higher than the sum of both ingredients.

This synergy of umami provides an explanation for various classical food pairings, starting with why Japanese make dashi with kombu seaweed and dried bonito flakes, and continuing with various other dishes: Chinese add Chinese leek and cabbage with chicken soup, as in the similar Scottish dish of cock-a-leekie soup, and Italians combine Parmesan cheese on tomato sauce with mushrooms. The umami taste sensation of those ingredients mixed together surpasses the taste of each one alone.

Umami has a mild but lasting after-taste difficult to describe. It induces salivation and a furriness sensation on the tongue, stimulating the throat, the roof and the back of the mouth (for review Yamaguchi, 1998).[19][20] By itself, umami is not palatable, but it makes a great variety of foods pleasant especially in the presence of a matching aroma.[21] But like other basic tastes, with the exception of sucrose, umami is pleasant only within a relatively narrow concentration range.[19] The optimum umami taste depends also on the amount of salt, and at the same time, low-salt foods can maintain a satisfactory taste with the appropriate amount of umami.[22] In fact, Roinien et al. showed that ratings on pleasantness, taste intensity and ideal saltiness of low salt soups were greater when the soup contained umami, whereas low-salt soups without umami were less pleasant.[23] Some population groups, such as the elderly, may benefit from umami taste because their taste and smell sensitivity is impaired by age and multiple medications. The loss of taste and smell can contribute to a poor nutritional status increasing their risk of disease.[24]Numerous studies have indicated the beneficial effect of adding umami flavor to foods and the increased in food consumption in institutionalized elderly populations ([25],[26],[27]).

Salt reduction can improve certain disease state such hypertension. It has been suggested that umami flavor be added to food to increase the palatability of foods with reduced salt and fat ([28]

The U.S. food and Drug Administration (FDA) classified glutamate as a Generally Recognized As Safe or GRAS ([29]. In 1987, JECFA (Joint FAO/WHO Expert Committee onf food additives) conducted a comprehensive study and found that there was no indication of adverse health effects due to consumption of glutamate in food ([30]. This study also concluded that as there were no evidence regarding the consumption of additives (such as glutamate) and infants, it recommended that additives should not be used in infants.

Many foods that may be consumed daily are rich in umami. Naturally occurring glutamate can be found in meats and vegetables; whereas inosinate comes primarily from meats and guanylate from vegetables. Thus, umami taste is common to foods that contain high levels of L-glutamate, IMP and GMP, most notably in fish, shellfish, cured meats, vegetables (e.g. mushrooms, ripe tomatoes, Chinese cabbage, spinach, etc.) or green tea, and fermented and aged products (e.g. cheeses, shrimp pastes, soy sauce, etc.).[32]

Humans' first encounter with umami is often breast milk.[33] It contains roughly the same amount of umami as broths.

There are some distinctions among stocks from different countries. In Japanese cuisine, dashi gives a very pure umami taste sensation because it is not based on meats. In dashi, L-glutamate comes from sea kombu (Laminaria japonica) and inosinate from dried bonito flakes (katsuobushi) or small dried sardines (niboshi). In contrast, Western or Chinese broths have a more complex taste because of a wider mixture of amino acids from bones, meats and vegetables.

All taste buds on the tongue and other regions of the mouth can detect umami taste independently of their location. The tongue map in which different tastes are distributed in different regions of the tongue is a common misconception. Biochemical studies have identified the taste receptors responsible for the sense of umami, a modified form of mGluR4, mGluR1 and taste receptor type 1 (T1R1 + T1R3), and all have been found in taste buds from any region of tongue.[34][35][36] The New York Academy of Sciences corroborated the acceptance of these receptors stating that "Recent molecular biological studies have now identified strong candidates for umami receptors, including the heterodimer T1R1/T1R3, and truncated type 1 and 4 metabotropic glutamate receptors missing most of the N-terminal extracellular domain (taste-mGluR4 and truncated-mGluR1) and brain-mGluR4."[9] Receptors mGluR1 and mGluR4 are specific to glutamate whereas T1R1 + T1R3 are responsible for the synergism already described by Akira Kuninaka in 1957. However, the specific role of each type of receptor in taste bud cells remains unclear. They are G protein-coupled receptors (GPCRs) with similar signaling molecules that include G proteins beta-gamma, PLCb2 and PI3-mediated release of calcium (Ca2+) from intracellular stores.[37] Ca2+ activates the selective cation channel transient receptor potential melastatin 5 (TrpM5) that leads to membrane depolarization and the consequent release of ATP and secretion of neurotransmitters including serotonin.[38][39][40][41] Cells responding to umami taste stimuli do not possess typical synapses, but ATP conveys taste signals to gustatory nerves and in turn to the brain that interprets and identifies the taste quality.[42][43]

fMRI studies identify the taste processing of umami in the brain to the middle insular cortex near an area that processes the taste of salt.[44]