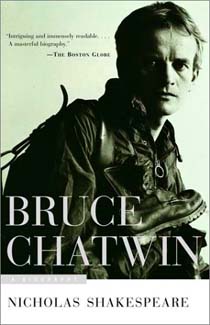 Bruce Charles Chatwin ( - ) was an English novelist and .

Chatwin was born on at his maternal grandparents' house in , near , . His mother, Margharita ("née" Turnell), had left the family home at , , and moved to her parents' home when Chatwin's father, Charles Chatwin, went away to serve with the . [Harvnb|Shakespeare|1999|p=22.]

He spent his early childhood living in West Heath in (then in ), where his father had a law practice. He was educated at , in . [Harvnb|Shakespeare|1999|p=65.]

In late 1964 he began to suffer from problems with his sight, which he attributed to the close analysis of artwork entailed by his job. He consulted eye specialist who diagnosed a latent squint and recommended that Chatwin take a six month break from his work at Sotheby's. Trevor-Roper had been involved in the design of an eye hospital in , and suggested Chatwin visit east Africa. In February 1965, Chatwin left for the . [Harvnb|Shakespeare|1999|p=158-159.] On his return, Chatwin quickly became disenchanted with the art world, and turned his interest instead to archaeology. He resigned from his job at Sotheby's in the early summer of 1966. [Harvnb|Shakespeare|1999|p=178.]

In 1972, Chatwin was hired by the "" as an adviser on art and architecture. [Harvnb|Shakespeare|1999|p=267.] His association with the magazine cultivated his narrative skills and he travelled on many international assignments, writing on such subjects as n migrant workers and the , and interviewing such diverse people as [Harvnb|Shakespeare|1999|p=280.] , in , and [Harvnb|Chatwin|1990|p=83-85.] , in the .

In 1972, Chatwin interviewed the 93-year-old architect and designer in her salon, where he noticed a map of the area of called which she had painted. [Harvnb|Shakespeare|1999|p=286.] "I've always wanted to go there," Bruce told her. "So have I," she replied, "go there for me." Two years later, in November 1974, Chatwin flew out to in , and reached Patagonia a month later. [Harvnb|Shakespeare|1999|p=287-291.] When he arrived there he severed himself from the newspaper with a : "Have gone to Patagonia." He spent six months there, a trip which resulted in the book "" (1977), which established his reputation as a travel writer. Later, however, residents in the region came forward to contradict the events depicted in Chatwin's book. It was the first, but not the last time in his career, that conversations and characters that Chatwin reported were alleged to be fictionalised.

Later works included a fictionalised study of the , "," which he researched with extended stays in the West African state of Benin. For "," Chatwin went to to develop the thesis that the songs of the Aborigines are a cross between a , an and an Aboriginal man's personal story. Winner of the ", On the Black Hill" was set closer to home, in the hill farms of the Welsh Borders, and focuses on the relationship between twin brothers, Lewis and Benjamin, who grow up isolated from the course of twentieth century history. "Utz," his last book, was a fictional take on the obsession which leads people to collect. Set in , the novel details the life and death of Kaspar Utz, a man obsessed with the collection of . Chatwin was working on a number of new ideas for future novels at the time of his death in 1989, including a trans-continental epic, provisionally titled "Lydia Livingstone."

Chatwin is admired for his spare, lapidary style and his innate story-telling abilities. However, he has also been strongly criticised for his fictionalised anecdotes of real people, places, and events. Frequently, the people he wrote about recognised themselves and did not always appreciate his distortions of their culture and behaviour. Chatwin, however, was philosophical about what he saw as an unavoidable dilemma, arguing that his portrayals were not intended to be faithful representations; as his biographer argues: 'He tells not a half truth, but a truth and a half.'

He extensively used a particular brand of notebooks manufactured in France. When production stopped in 1986, he bought up the entire supply at his stationery store. A modern version of the simple, black notebooks are sold by .

Much to the surprise of many of his friends, Chatwin married Elizabeth Chanler, a descendant of , on . [Harvnb|Shakespeare|1999|p=171.] He had met Chanler at Sotheby's where she worked as a secretary. Chatwin was bisexual throughout his married life, a circumstance his wife knew and accepted. They had no children, and after fifteen years of marriage, she asked for a separation and sold their in . [Harvnb|Shakespeare|1999|p=373.] However, towards the end of his life they reconciled. According to Chatwin's biographer Nicholas Shakespeare, the Chatwins' marriage seems to have been celibate, and he describes Chatwin as rather than .

Numbered among his lovers was [Bruce Chatwin, " [http://www.knittingcircle.org.uk/brucechatwin.html The Knitting Circle] " , accessed 2006-12-28] .

Death at an early age

Around 1980, Chatwin contracted . Chatwin told different stories about how he contracted the virus, such as that he was gang-raped in , and that he believed he caught the disease from , the patron and lover of photographer [James Crump " [http://www.blackwhitegray.com/ Black White + Gray: A portrait of Sam Wagstaff + Robert Mapplethorpe] "] . He was one of the first high-profile sufferers of the disease in Britain and although he hid the illness - passing off his symptoms as s or the effects of the bite of a Chinese , a typically exotic cover story - it was a poorly kept secret. He did not respond well to , and suffered increasing bouts of psychosis which included extravagant shopping trips around the auction rooms of London - many of which purchases his wife quietly returned.Fact|date=August 2008 With his condition deteriorating rapidly, Chatwin and his wife went to live in the South of France at the house that belonged to the mother of his one-time lover, . There, during his final months, Chatwin was nursed by both his wife and . He died in in 1989 at age 48.

A memorial service was held in the Church of Saint Sophia in West London on the same day that a was announced on , a close friend of Chatwin's who was in attendance. , Chatwin's one-time friend and fellow-writer, quotes himself as saying to Rushdie "it'll be your turn next, Salman". Theroux later commented on the memorial service in a piece he wrote for , condemning Chatwin for failing to acknowledge that the disease he was dying of was AIDS.

Chatwin's funeral was also attended by the novelist who describes the memorial in his essay "Salman Rushdie", from the anthology "Visiting Mrs Nabokov".

His ashes were scattered by a Byzantine chapel above Kardamyli in the near to the home of one of his mentors, .