Plagues of the desert locust (Schistocerca gregaria) have threatened agricultural production in Africa, the Middle East, and Asia for centuries. The livelihood of at least one-tenth of the world’s human population can be affected by this voracious insect. The desert locust is potentially the most dangerous of the locust pests because of the ability of swarms to fly rapidly across great distances. It has two to five generations per year. The last major desert locust upsurge in 2004-05 caused significant crop losses in West Africa and had a negative impact on food security in the region. While the desert locust alone is not responsible for famines, it can be an important contributing factor.

The desert locust lives a solitary life until it rains. Rain causes vegetation growth and allows the female to lay eggs in the sandy soil. The new vegetation provides food for the newly hatched locusts and provides them with shelter as they develop into winged adults. 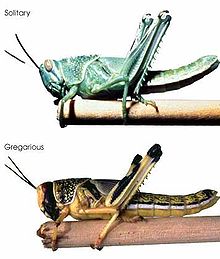 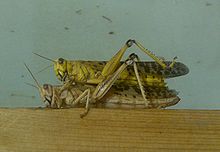 When vegetation is distributed in such a way that the nymphs, usually called hoppers, have to congregate to feed, and there has been sufficient rain for most eggs to hatch, the close physical contact causes the insects' hind legs to bump against one another. This stimulus triggers a cascade of metabolic and behavioral changes that cause the insects to transform from the solitary form to the gregarious form. When the hoppers become gregarious, they change from green-coloured to yellow and black, and the adults change from brown to red (immature) or yellow (mature). Their bodies become shorter, and they give off a pheromone that causes them to be attracted to each other, enhancing hopper band and subsequently swarm formation. Interestingly, the nymphal pheromone is different from the adult one. When exposed to the adult pheromone, hoppers become confused and disoriented, because they can apparently no longer "smell" each other, though the visual and tactile stimuli remain. After a few days, the hopper bands disintegrate and those that escape predation become solitary again. It is possible that this effect could aid locust control in the future.

During quiet periods, called recessions, desert locusts are confined to a 16-million-square-kilometer belt that extends from Mauritania through the Sahara Desert in northern Africa, across the Arabian Peninsula, and into northwest India. Under optimal ecological and climatic conditions, several successive generations can occur, causing swarms to form and invade countries on all sides of the recession area, as far north as Spain and Russia, as far south as Nigeria and Kenya, and as far east as India and southwest Asia. As many as 60 countries can be affected within an area of 32 million square kilometers, or approximately 20 percent of the Earth's land surface.

Locust swarms fly with the wind at roughly the speed of the wind. They can cover from 100 to 200 kilometers in a day, and will fly up to about 2,000 meters above sea level (thereafter, it becomes too cold). Therefore, swarms cannot cross tall mountain ranges such as the Atlas Mountains, the Hindu Kush or the Himalayas. They will not venture into the rain forests of Africa nor into central Europe. However, locust adults and swarms regularly cross the Red Sea between Africa and the Arabian Peninsula, and are even reported to have crossed the Atlantic Ocean from Africa to the Caribbean in ten days during the 1987-89 plague. A single swarm can cover up to 1200 square kilometers and can contain between 40 and 80 million locusts per square kilometer. The locust can live between three to six months, and there is a ten to 16-fold increase in locust numbers from one generation to the next.

The migratory locust (Locusta migratoria) ranges from Europe to China, and even small swarms may cover several square miles, and weigh thousands of tons. Control by spreading poisoned food among the bands is very effective, but it is cheapest to spray concentrated insecticide solutions from aircraft over the insects or the vegetation on which they feed. They eat the equivalent of their own weight in a day, and, flying at night with the wind, may cover some 500 km/300 mi. The largest known swarm covered 1,036 km2/400 sq mi, comprising approximately 40 billion insects. 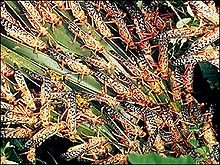 Early warning and preventive control is the strategy adopted by locust-affected countries in Africa and Asia to try to stop locust plagues from developing and spreading. FAO's Desert Locust Information Service (DLIS) in Rome, Italy monitors the weather, ecological conditions and the locust situation on a daily basis. DLIS receives results of survey and control operations carried out by national teams in affected countries, and combines this information with satellite data such as MODIS, rainfall estimates and seasonal temperature and rainfall predictions to assess the current situation and forecast the timing, scale and location of breeding and migration up to six weeks in advance. The situation assessments and forecasts are published in monthly locust bulletins that date back to the 1970s. These are supplemented by warnings and alerts to affected countries and the international community. Those since the 1990s are available on the FAO Locust Watch web site [www.fao.org/ag/locusts]. FAO also provides information and training to affected countries and coordinates funding from donor agencies in case of major upsurges and plagues.

The desert locust is a difficult pest to control, and control measures are further compounded by the large and often remote areas (16-30 million km²) where locusts can be found. Undeveloped basic infrastructure in some affected countries, limited resources for locust monitoring and control, and political turmoil within and between affected countries further reduce the capacity of a country to undertake the necessary monitoring and control activities.

At present, the primary method of controlling desert locust infestations is with insecticides applied in small concentrated doses by vehicle-mounted and aerial sprayers at ultra-low volume (ULV) rates of application. The insecticide is acquired by the insect directly or via secondary pickup (i.e. walking over or eating the residue on a plant). Control is undertaken by government agencies in locust-affected countries or by specialised organisations such as the Desert Locust Control Organisation for East Africa (DLCO-EA).

Natural enemies such as predatory and parasitic wasps and flies, predatory beetle larvae, birds, and reptiles may have limited effects on desert locusts because they can be easily overwhelmed by the sheer magnitude of most swarms and hopper bands. On the other hand, they may be effective in keeping solitary populations in check.

Farmers often try mechanical means of killing locusts, such as digging trenches and burying hopper bands, but this is very labor intensive and is difficult to undertake when large infestations are scattered over a wide area. Farmers also try to scare locust swarms away from their fields by making noise, burning tires or other methods. This tends to shift the problem to neighbouring farms, and locust swarms can easily reinfest previous fields.

Biopesticides include fungi, bacteria, neem extract and pheromones. The effectiveness of many biopesticides equals that of conventional chemical pesticides, but there are two distinct differences. Biopesticides in general take longer to kill insects, plant diseases, or weeds, usually between 2 and 10 days.

There are two types of biopesticides - biochemical and microbial. Biochemical pesticides are similar to naturally occurring chemicals and are nontoxic, such as insect pheromones used to locate mates, while microbial biopesticides like Green Muscle come from bacteria, fungi, algae or viruses that either occur naturally or are genetically altered. Entomopathogenic fungi generally suppress pests by mycosis: causing a disease that is specific to the insect.

A biological control product has been under development since the late nineties. It is based on a naturally occurring entomopathogenic fungus (i.e. insects-infecting fungus) , Metarhizium acridum. Species of Metarhizium are widespread throughout the world, infecting many groups of insects, but show a low risk to humans, other mammals and birds. The species M. acridum has specialised on short-horned grasshoppers, to which group locusts belong, and has therefore been chosen as the active ingredient of the product.

The product is available in Africa under the name Green Muscle and in Australia as Green Guard. It is applied in the same way as chemical insecticides, but does not kill as quickly. At recommended doses, the fungus can take up two weeks to kill up to 90% of the locusts. For that reason, it is recommended for use mainly against hoppers, the wingless early stages of locusts. These are mostly found in the desert, far from cropping areas, where the delay in death does not result in damage. The advantage of the product is that it affects only grasshoppers and locusts, which makes it much safer than chemical insecticides. Specifically, it allows the natural enemies of locusts and grasshoppers to continue their beneficial work. These include birds, parasitoid and predatory wasps, parasitoid flies and certain species of beetles. Though natural enemies cannot prevent plagues, they can limit the frequency of outbreaks and contribute to their control. Biopesticides are also safer to use in environmentally sensitive areas such as national parks or near rivers and other water bodies.

Green Muscle was developed under the LUBILOSA Programme, which was initiated in 1989 in response to environmental concerns over the heavy use of chemical insecticides to control locusts and grasshoppers during the 1987-89 plague. The project focused on the use of beneficial disease-causing microorganisms (pathogens) as biological control agents for grasshoppers and locusts. These insects were considered to be too mobile and to reproduce too fast to be readily controlled by classical biological control. Pathogens have the advantage that many can be produced in artificial culture in large quantities and be used with ordinary spraying equipment. Entomopathogenic fungi were traditionally seen as needing humid conditions to work well. However, the LUBILOSA Programme found a way to avoid this by spraying fungal spores in an oil formulation. Even under desert conditions, Green Muscle can be used to kill locusts and other Acridid pests, such as the Senegalese grasshopper. During recent trials in Algeria and Mauritania (2005 and 2006), various natural enemies, but especially birds, were abundant enough to eliminate treated hopper bands in about a week, because the diseased hoppers became sluggish and easy to catch.

From October 2003 to May 2005, West Africa faced the largest desert locust outbreak in 15 years. The upsurge started as small independent outbreaks that developed in Mauritania, Mali, Niger and Sudan in the autumn of 2003. Two days of unusually heavy rains that stretched from Dakar, Senegal to Morocco in October allowed breeding conditions to remain favourable for the next six months and the desert locusts rapidly increased. Lack of rain and cold temperatures in the winter breeding area of northwest Africa in early 2005 slowed the development of the locusts and allowed the locust control agencies to stop the cycle. During the upsurge, nearly 130,000 km² were treated by ground and aerial operations in more than 20 countries. The costs of fighting this upsurge have been estimated by the FAO to have exceeded US$400 million, and harvest losses were valued at up to US$2.5 billion, which had disastrous effects on the food security situation in West Africa.

Owing to the destructive habits of locusts, they have been a representation of famine in many Middle Eastern cultures. This theme commonly occurs, such as in the movies The Mummy and The Bible.