Geostationary orbit.To an observer on the rotating Earth (fixed point on the Earth), the satellite appears stationary in the sky. A red satellite is also geostationary above its own point on Earth. Top Down View

Side view of Geostationary 3D of 2 satellites

Side view of Geostationary 3D of 2 satellites of Earth 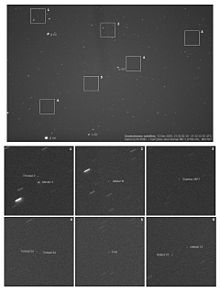 A 5 x 6 degrees view of a part of the geostationary belt, showing several geostationary satellites. Those with inclination 0 degrees form a diagonal belt across the image: a few objects with small inclinations to the equator are visible above this line. Note how the satellites are pinpoint, while stars have created small trails due to the Earth's rotation.

The notion of a geosynchronous satellite for communication purposes was first published in 1928 (but not widely so) by Herman Potočnik.[1] The idea of a geostationary orbit was first disseminated on a wide scale in a 1945 paper entitled "Extra-Terrestrial Relays — Can Rocket Stations Give Worldwide Radio Coverage?" by British science fiction writer Arthur C. Clarke, published in Wireless World magazine. The orbit, which Clarke first described as useful for broadcast and relay communications satellites,[2] is sometimes called the Clarke Orbit.[3] Similarly, the Clarke Belt is the part of space about 35,786 km (22,000 mi) above sea level, in the plane of the equator, where near-geostationary orbits may be implemented. The Clarke Orbit is about 265,000 km (165,000 mi) long.

Geostationary orbits are useful because they cause a satellite to appear stationary with respect to a fixed point on the rotating Earth, allowing a fixed antenna to maintain a link with the satellite. The satellite orbits in the direction of the Earth's rotation, at an altitude of 35,786 km (22,236 mi) above ground, producing an orbital period equal to the Earth's period of rotation, known as the sidereal day.

A worldwide network of operational geostationary meteorological satellites is used to provide visible and infrared images of Earth's surface and atmosphere. These satellite systems include:

A statite, a hypothetical satellite that uses a solar sail to modify its orbit, could theoretically hold itself in a "geostationary" orbit with different altitude and/or inclination from the "traditional" equatorial geostationary orbit.

In any circular orbit, the centripetal force required to maintain the orbit is provided by the gravitational force on the satellite. To calculate the geostationary orbit altitude, one begins with this equivalence, and uses the fact that the orbital period is one sidereal day.

By Newton's second law of motion, we can replace the forces F with the mass m of the object multiplied by the acceleration felt by the object due to that force:

We note that the mass of the satellite m appears on both sides — geostationary orbit is independent of the mass of the satellite.[4] So calculating the altitude simplifies into calculating the point where the magnitudes of the centripetal acceleration required for orbital motion and the gravitational acceleration provided by Earth's gravity are equal.

The centripetal acceleration's magnitude is:

where ω is the angular speed, and r is the orbital radius as measured from the Earth's center of mass.

The magnitude of the gravitational acceleration is:

Orbital speed (how fast the satellite is moving through space) is calculated by multiplying the angular speed by the orbital radius:

A geostationary orbit can only be achieved at an altitude very close to 35,786 km (22,236 mi), and directly above the equator. This equates to an orbital velocity of 3.07 km/s (1.91 mi/s) or a period of 1,436 minutes, which equates to almost exactly one sidereal day or 23.934461223 hours. This makes sense considering that the satellite must be locked to the Earth's rotational period in order to have a stationary footprint on the ground. In practice, this means that all geostationary satellites have to exist on this ring, which poses problems for satellites that will be decommissioned at the end of their service lives (e.g., when they run out of thruster fuel). Such satellites will either continue to be used in inclined orbits (where the orbital track appears to follow a figure-eight loop centered on the equator), or else be elevated to a "graveyard" disposal orbit.

A combination of lunar gravity, solar gravity, and the flattening of the Earth at its poles is causing a precession motion of the orbit plane of any geostationary object with a period of about 53 years and an initial inclination gradient of about 0.85 degrees per year, achieving a maximum inclination of 15 degrees after 26.5 years. To correct for this orbital perturbation, regular orbital stationkeeping maneuvers are necessary, amounting to a delta-v of approximately 50 m/s per year.

The second effect to be taken into account is the longitude drift, caused by the asymmetry of the earth - the equator is slightly elliptical. There are two stable (at 75.3°E, and at 104.7°W) and two unstable (at 165.3°E, and at 14.7°W) equilibrium points. Any geostationary object placed between the equilibrium points would (without any action) be slowly accelerated towards the stable equilibrium position, causing a periodic longitude variation. The correction of this effect requires orbit control maneuvers with a maximum delta-v of about 2 m/s per year, depending on the desired longitude.

In the absence of servicing missions from the Earth, the consumption of thruster propellant for station-keeping places a limitation on the lifetime of the satellite.

For example, for ground stations at latitudes of φ=±45° on the same meridian as the satellite, the one-way delay can be computed by using the cosine rule, given the above derived geostationary orbital radius r, the Earth's radius R and the speed of light c, as

This presents problems for latency-sensitive applications such as voice communication or online gaming.[6]

Satellites in geostationary orbit must all occupy a single ring above the equator. The requirement to space these satellites apart to avoid harmful radio-frequency interference during operations means that there are a limited number of orbital "slots" available, thus only a limited number of satellites can be operated in geostationary orbit. This has led to conflict between different countries wishing access to the same orbital slots (countries at the same longitude but differing latitudes) and radio frequencies. These disputes are addressed through the International Telecommunication Union's allocation mechanism.[7] Countries located at the Earth's equator have also asserted their legal claim to control the use of space above their territory.[8]