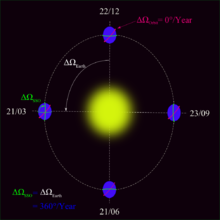 A Sun-synchronous orbit (sometimes called a heliosynchronous orbit) is a geocentric orbit which combines altitude and inclination in such a way that an object on that orbit ascends or descends over any given point of the Earth's surface at the same local mean solar time. The surface illumination angle will be nearly the same every time. This consistent lighting is a useful characteristic for satellites that image the Earth's surface in visible or infrared wavelengths (e.g. weather and spy satellites) and for other remote sensing satellites (e.g. those carrying ocean and atmospheric remote sensing instruments that require sunlight). For example, a satellite in sun-synchronous orbit might ascend across the equator twelve times a day each time at approximately 15:00 mean local time. This is achieved by having the osculating orbital plane precess (rotate) approximately one degree each day with respect to the celestial sphere, eastward, to keep pace with the Earth's revolution around the Sun.[1]

The uniformity of Sun angle is achieved by tuning the inclination to the altitude of the orbit (details in section "Technical details") such that the extra mass near the equator causes orbital plane of the spacecraft to precess with the desired rate: the plane of the orbit is not fixed in space relative to the distant stars, but rotates slowly about the Earth's axis. Typical sun-synchronous orbits are about 600–800 km in altitude, with periods in the 96–100 minute range, and inclinations of around 98° (i.e. slightly retrograde compared to the direction of Earth's rotation: 0° represents an equatorial orbit and 90° represents a polar orbit).[1]

As the orbital period of a spacecraft is

is the gravitational constant of the Earth (

is the coefficient for the second zonal term (

As an example, for a=7200 km (the spacecraft about 800 km over the Earth surface) one gets with this formula a sun-synchronous inclination of 98.696 deg.

is an extremely small coefficient. Nowadays one uses 2000/01/01 00:00:00 corresponding to Modified Julian Day zero. This then means (counting angles in radians) that the angle from Vernal equinox to the direction away from the Sun projected down to the equatorial plane must be approximately

The right ascension of the ascending node (

) for a sun-synchronous orbit increases with precisely this rate

which is the "mean motion" of the Earth in its orbit around the Sun.

The Sun-synchronous orbit is mostly selected for Earth observation satellites that should be operated at a relatively constant altitude suitable for its Earth observation instruments, this altitude typically being between 600 km and 1000 km over the Earth surface. Because of the deviations of the gravitational field of the Earth from that of a homogeneous sphere that are quite significant at such relatively low altitudes a strictly circular orbit is not possible for these satellites. Very often a frozen orbit is therefore selected that is slightly higher over the Southern hemisphere than over the Northern hemisphere. ERS-1, ERS-2 and Envisat of European Space Agency as well as the MetOp spacecraft of the European Organisation for the Exploitation of Meteorological Satellites are all operated in Sun-synchronous, "frozen" orbits.[citation needed]