A space rendezvous is an orbital maneuver during which two spacecraft, one of which is often a space station, arrive at the same orbit and approach to a very close distance (e.g. within visual contact). Rendezvous requires a precise match of the orbital velocities of the two spacecraft, allowing them to remain at a constant distance through orbital station-keeping. Rendezvous may or may not be followed by docking or berthing, procedures which bring the spacecraft into physical contact and create a link between them.

In 1962 and again 1963, the Soviet Union launched pairs of spacecraft simultaneously, Vostok 3 and 4 and Vostok 5 and 6. In both cases, the launch rockets' guidance systems inserted the two craft into nearly identical orbits; however the precision of such a system was not nearly enough to achieve true rendezvous. This required at least one spacecraft to have its own thrusters with which it could adjust its orbit to precisely match that of the other craft, and the Vostok capsule lacked such thrusters. The initial separation distances were in the range of 5 kilometres (3.1 mi) to 6.5 kilometres (4.0 mi), but slowly diverged to thousands of kilometres (over a thousand miles) over the course of the missions.

The first space rendezvous was attempted on June 3, 1965 by US astronaut Jim McDivitt on Gemini 4 with the spent Titan II launch vehicle's upper stage. McDivitt was unable to get close enough to the stage to achieve station-keeping, because of depth-perception problems and propellant venting which kept moving the stage around.[1] 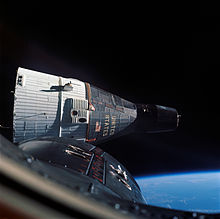 Rendezvous was first successfully accomplished by US astronaut Wally Schirra on December 15, 1965, who maneuvered the Gemini 6A spacecraft within 1 foot (30 cm) of its sister craft Gemini 7. The spacecraft were not equipped to dock with each other, but maintained station-keeping for more than 20 minutes. Schirra later commented:

Somebody said ... when you come to within three miles (5 km), you've rendezvoused. If anybody thinks they've pulled a rendezvous off at three miles (5 km), have fun! This is when we started doing our work. I don't think rendezvous is over until you are stopped – completely stopped – with no relative motion between the two vehicles, at a range of approximately 120 feet (37 m). That's rendezvous! From there on, it's stationkeeping. That's when you can go back and play the game of driving a car or driving an airplane or pushing a skateboard – it's about that simple.
—[2] 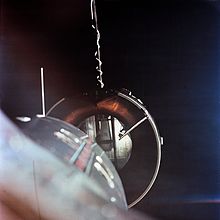 The first docking of two spacecraft was achieved on March 16, 1966, when Gemini 8, under the command of Neil Armstrong, rendezvoused and docked with an unmanned Agena Target Vehicle. This had been originally planned for Gemini 6, but had to be cancelled when the Agena vehicle was destroyed during liftoff. The docking mission was then replaced with the Gemini 7/6A rendezvous mission.

The first Soviet cosmonaut to attempt a manual docking was Georgi Beregovoi who unsuccessfully tried to dock his Soyuz 3 craft with the unmanned Soyuz 2 in October 1968. He was able to bring his craft from 200 metres (660 ft) to as close as 1 foot (0.30 m), but was unable to dock before exhausting his maneuvering fuel.

The first rendezvous of two spacecraft from different countries took place on June 17, 1975, when an Apollo spacecraft docked with a Soyuz spacecraft as part of the Apollo-Soyuz Test Project.

The first multiple space docking took place when both Soyuz 26 and Soyuz 27 were docked to the Salyut 6 space station during January 1978.

A frequent use of space rendezvous has been the transportation of crew and supplies to orbiting space stations. The first of these was the rendezvous and docking on June 7, 1971 of the ill-fated Soyuz 11 mission with the Salyut 1 station. In the past, human spaceflight missions have made rendezvous with each of six Salyut stations, with Skylab, with Mir and with the International Space Station (ISS). Currently Soyuz spacecraft are used to bring crew to the ISS.

Robotic spacecraft are also used to rendezvous with and resupply space stations. Soyuz and Progress spacecraft have automatically docked with both Mir[4] and the ISS using the Kurs docking system, while the Automated Transfer Vehicle has docked with ISS using a laser system. The robotic H-II Transfer Vehicle, however, is planned to fly to a close rendezvous without docking, in order to allow the ISS's Canadarm2 to bring it into dock.

Space rendezvous have been used for a variety of other purposes, including recent service missions to the Hubble Space Telescope. Historically, for the missions of Project Apollo that landed astronauts on the Moon, the ascent stage of the Apollo Lunar Module would rendezvous and dock with the Apollo Command/Service Module in lunar orbit rendezvous maneuvers. Also, the STS-49 crew rendezvoused with and attached a rocket motor to the Intelsat VI F-3 communications satellite to allow it to make an orbital maneuver.

Possible future rendezvous may be made by a yet to be developed automated Hubble Robotic Vehicle (HRV), and by the CX-OLEV, which is being developed for rendezvous with a geosynchronous satellite that has run out of fuel. The CX-OLEV would take over orbital stationkeeping and/or finally bring the satellite to a graveyard orbit, after which the CX-OLEV can possibly be reused for another satellite. Gradual transfer from the geostationary transfer orbit to the geosynchronous orbit will take a number of months, using Hall effect thrusters. [1]

Alternatively the two spacecraft are already together, and just undock and dock in a different way:

Anti-satellite weapons partly fall under the category of hostile rendezvous. Kinetic projectiles do not use explosives or radiation, but just collide.

The standard technique for rendezvous and docking is to dock an active vehicle with a passive target. This technique has been used successfully for the Gemini, Apollo, Apollo/Soyuz, Salyut, Skylab, Mir, and ISS programs.

For this to be possible, both spacecraft must be in the same orbital plane, and the phase[clarification needed] of the orbit must be matched. This can be achieved by one spacecraft being in a higher orbit than the other, and the lower orbit will gain on the higher orbit over time.[citation needed]

Space rendezvous of an active, or "chaser", spacecraft with an (assumed) passive spacecraft may be divided into several phases, and typically starts with the two spacecraft in separate orbits, typically separated by more than 10,000 kilometres (6,200 mi):[6]

A variety of spacecraft control techniques may be used to effect the translational and rotational maneuvers necessary for proximity operations and docking.[8]

The two most common methods of approach for proximity operations are V-bar and R-bar.[6]

STS-104 was the third Space Shuttle mission to conduct a V-bar arrival at the International Space Station.[9] The V-bar, or velocity vector, extends along a line directly ahead of the station. Shuttles approach the ISS along the V-bar when docking at the PMA-2 docking port.[10]

Astrotech proposed meeting ISS cargo needs with a vehicle which would approach the station, "using a traditional nadir R-bar approach."[11]