The Space Shuttle orbiter was the orbital spacecraft of the Space Shuttle program operated by NASA, the space agency of the United States.[1] The orbiter was a reusable winged "space-plane", a mixture of rockets, spacecraft, and aircraft. This space-plane could carry crews and payloads into low Earth orbit, perform on-orbit operations, then re-enter the atmosphere and land as a glider, returning its crew and any on-board payload to the Earth.

A total of six Orbiters were built for flight: Atlantis, Challenger, Columbia, Discovery, Endeavour and Enterprise. All were built by the Pittsburgh, PA based Rockwell International company. The first Orbiter to fly, Enterprise, took its maiden flight in 1977. Built solely for unpowered atmospheric test flights and landings, its take-off was from the back of a modified Boeing-747 cargo plane, the Shuttle Carrier Aircraft, while the remaining Orbiters were built for orbital space flights, launched vertically as part of the full Space Shuttle package. Enterprise was partially disassembled and retired after completion of critical testing.

Columbia was the first Orbiter to launch into space as a Space Shuttle, in 1981. The first launches of Challenger, Discovery, and finally Atlantis, followed in 1983, 1984 and 1985 respectively. In 1986, Challenger was destroyed in an accident after launch. Endeavour was built as Challenger's replacement, and was first launched in 1992. In 2003, Columbia was destroyed during re-entry, leaving just three remaining Orbiters. Discovery completed its final flight on March 9, 2011, and Endeavour completed its final flight on June 1, 2011. Atlantis completed the last ever Shuttle flight, STS-135, on July 21, 2011.

In addition to their crews and payloads, the reusable Orbiter carried most of the Space Shuttle System's liquid-fueled rocket propulsion system, but both the liquid hydrogen fuel and the liquid oxygen oxidizer for its three main rocket engines were fed from an external cryogenic propellant tank, and there were also two reusable large solid-fueled rocket boosters that helped to lift both the Orbiter and its external propellant tanks during approximately the first two minutes of its ascent into outer space. 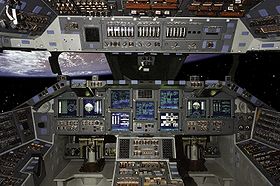 The Space Shuttle Orbiter resembled an aircraft in its design, with a standard-looking fuselage and two double-delta wings, both swept at an angle of 81 degrees at their inner leading edges and 45 degrees at their outer leading edges. The vertical stabilizer of the Orbiter had a leading edge that was swept back at a 45-degree angle. There were four elevons mounted at the trailing edges of the delta wings, and the combination rudder and speed brake was attached at the trailing edge of the vertical stabilizer. These, along with a movable body flap, controlled the Orbiter during later stages of descent through the atmosphere and landing.

Overall, the Space Shuttle Orbiter was roughly the same size as a McDonnell Douglas DC-9 airliner.

The Reaction Control System (RCS) was composed of 44 small liquid-fueled rocket thrusters and their very sophisticated computerized (fly-by-wire) flight control system, which utilized computationally intensive digital Kalman Filtering. This control system carried out the usual attitude control along the pitch, roll, and yaw axes during all of the flight phases of launching, orbiting, and re-entry. This system also executed any needed orbital maneuvers, including all changes in the orbit's altitude, orbital plane, and eccentricity. These were all operations that required a lot more power and energy than mere attitude control.

The forward rockets of the Reaction Control System, located near the nose of the Space Shuttle Orbiter, included 12 primary and two vernier RCS rockets. The aft RCS engines were located in the two Orbital Maneuvering System (OMS) pods at the rear of the Orbiter, and these included 12 primary and two vernier RCS engines in each pod. The RCS system provided the fine-pointing control of the Orbiter, and the RCS was used for the maneuvering during the rendezvous, docking, and undocking maneuvering with the International Space Station, or formerly with the Russian Mir space station. The RCS also controlled the attitude of the Orbiter during most of its re-entry into the Earth's atmosphere - until the air became dense enough that the elevons and the rudder became effective.[2] 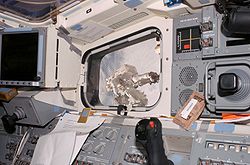 Looking out a rear cabin window in orbit

The Orbiter astronaut's crew cabin consisted of three levels: the flight deck, the mid-deck, and the utility area. The uppermost of these was the flight deck, in which sat the Space Shuttle's commander and co-pilot, with up to two mission specialists seated behind them. The mid-deck, which was below the flight deck, had three more seats for the rest of the crew members.

The galley, toilet, sleep locations, storage lockers, and the side hatch for entering and exiting the Orbiter were also located on the mid-deck, as well as the airlock. The airlock had an additional hatch into the Payload Bay. This airlock allowed two astronauts, wearing their Extravehicular Mobility Unit (EMU) space suits, to depressurize before a walk in space (EVA), and also to repressurize and re-enter the Orbiter at the conclusion of the EVA.

Three Space Shuttle Main Engines (SSMEs) were mounted on the Orbiter's aft fuselage in the pattern of an equilateral triangle. These three liquid-fueled engines could be swiveled 10.5 degrees vertically and 8.5 degrees horizontally during the rocket-powered ascent of the Orbiter in order to change the direction of their thrust. Hence, they steered the entire Space Shuttle, as well as providing rocket thrust towards orbit. The aft of the fuselage also housed three auxiliary power units (APU). The APUs burned hydrazine to provide hydraulic pressure for all of the hydraulic system, including the ones that pointed the three main liquid-fueled rocket engines, under computerized flight control. The hydraulic pressure generated was also used to control all of the Orbiter's "aerosurfaces" (the elevons, rudder, air brake, etc.), to deploy the landing gear of the Orbiter, and to open and close the cargo bay's large main doors.

Two Orbital Maneuvering System (OMS) thrusters were mounted in two separate pods in the Orbiter's aft fuselage, located between the SSMEs and the vertical stabilizer of the Orbiter. The OMS engines provided significant thrust for coarse orbital maneuvers, including insertion, circularization, transfer, rendezvous, deorbit, abort to orbit, and to abort once around.[3] At lift-off, two solid rocket boosters (SRBs) are used to take the vehicle to an altitude of roughly 140,000 feet.[4]

The orbiters are protected by Thermal Protection System (TPS) materials, that are developed by Rockwell Space Systems, inside and out, from the orbiter's outer surface to the cargo bay.[5] The TPS protects it from the cold soak of -121 °C (-250 °F) in space to the 1649 °C (3000 °F) heat of re-entry.

The orbiter structure was made primarily from aluminum alloy, although the engine thrust structure was made from titanium alloy. The windows were made of aluminum silicate glass and fused silica glass, and comprised an internal pressure pane, a 1.3-inch-thick (33 mm) optical pane, and an external thermal pane.[6] The windows were tinted with the same ink used to make American banknotes.[7] 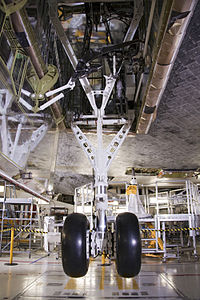 The Space Shuttle Orbiter had three sets of landing gear (wheels, brakes, steering motors) which emerged downwards through doors in the heat shield. As a weight-saving measure, the gear could not be retracted once deployed. Since any premature extension of the landing gear would very likely have been catastrophic (as it opened through the heat shield layers), the landing gear could only be lowered by manual controls, and not by any automatic system. Similarly, since the Shuttle landed at high speed and could not abort its landing attempt, the gear had to deploy reliably on the first try every time. The gear were unlocked and deployed by triple redundant hydraulics, with the gear doors actuated by mechanical linkages to the gear strut. If all three hydraulic systems failed to release the landing gear uplocks within one second of the release command, pyrotechnic charges automatically cut the lock hooks and a set of springs deployed the gear.

An orbiter with landing gear retracted, on a transporter

There was a transporter to move Orbiters around on the ground when their landing gear was retracted.

The Space Shuttle Orbiter did not carry anti-collision lights, navigational lights, or landing lights, as the Orbiter always landed in areas that had been specially cleared by both the Federal Aviation Administration and the Air Force. The Orbiter nearly always landed at either Edwards Air Force Base (California) or near to the Patrick Air Force Base (Florida), although one mission - STS-3 - landed at the White Sands Space Harbor in New Mexico. Similar special clearances (no-fly zones) were also in effect at potential emergency landing sites, such as in Spain and in West Africa during all launches.

When an Orbiter landing was carried out at night, the runway was always strongly illuminated with light from floodlights and spotlights on the ground, making landing lights on the Orbiter unnecessary and also an unneeded spaceflight weight load. A total of 26 landings took place at night, the first being STS-8 in September 1983.[8]

With the end of the shuttle program, plans were made to place the three remaining shuttle orbiters on permanent display. NASA Administrator Charles Bolden announced the disposition location of the orbiters on Tuesday April 12, 2011, the 50th anniversary of the first manned space flight and the 30th anniversary of the first flight of Columbia. Discovery will go to the Smithsonian's Steven F. Udvar-Hazy Center, Atlantis will go to the Kennedy Space Center, and Endeavour will go to the California Science Center in Los Angeles. Enterprise, which is currently at the Udvar-Hazy Center, will be relocated to the Intrepid Sea, Air & Space Museum in New York City. Hundreds of other shuttle artifacts will be put on display at various other museums and educational institutions around the US.[9]

The orbiter's maximum glide ratio/lift-to-drag ratio varied considerably with speed, ranging from 1:1 at hypersonic speeds, 2:1 at supersonic speeds, and reaching 4.5:1 at subsonic speeds during approach and landing.[10]

Individual Space Shuttle orbiters were named in honor of antique sailing ships of the navies of the world, and they are also numbered using the NASA Orbiter Vehicle Designation system. Three of the names had also been borne by Apollo spacecraft in 1969-1972: Apollo 11 command module Columbia, Apollo 15 command module Endeavour, and Apollo 17 lunar module Challenger.

While all of the Orbiters are externally practically identical, they have minor differences in their interiors. New equipment for the Orbiters was installed in the same order that they underwent maintenance work, and the newer Orbiters were constructed by Rockwell International, under NASA supervision, with some more advanced, lighter in weight, structural elements. Thus, the newer Orbiters, such as the Atlantis and the Endeavour, had slightly more cargo capacity than the others.

Challenger while in service as structural test article STA-099. 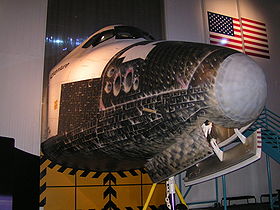 In addition to the test articles and orbiters produced for use in the Shuttle program, there are also various mock-ups on display throughout the world:

U.S. shuttle Columbia landing at the end of STS-73.