Even before the Apollo moon landing in 1969, in October 1968, NASA began early studies of space shuttle designs. The early studies were denoted "Phase A", and in June 1970, "Phase B", which were more detailed and specific. The primary intended use of the space shuttle was supporting the future space station. This function would dictate most of the shuttle's features. The U.S. Air Force was also interested in using the shuttle, and NASA welcomed their participation and influence to ensure political and financial support for the shuttle program.

Initially, many potential shuttle designs were proposed during the 1960s, and they varied widely. Many were exceedingly complex. An attempt to re-simplify was made in the form of the "DC-3" by Maxime Faget, who had designed the Mercury capsule among other vehicles. The DC-3 was a small craft with a 20,000-pound (9 metric ton) payload, a four-man capacity, and limited aerodynamic maneuverability. At a minimum, the DC-3 provided a baseline "workable" (but not significantly advanced) system by which other systems could be compared for price-performance compromises.

In 1969, United States Vice President Agnew chaired the National Aeronautics and Space Council, which discussed post-Apollo options for manned space activities.[1] The recommendations of the Council would heavily influence the decisions of the administration. The Council considered four major options:

Based on the advice of the Space Council, President Nixon made the decision to pursue the low earth orbital infrastructure option. This program mainly consisted of construction of a space station, along with the development of a Space Shuttle. Funding restrictions precluded pursuing the development of both programs simultaneously, however. NASA chose to develop the Space Shuttle program first, and then planned to use the shuttle in order to construct and service a space station. 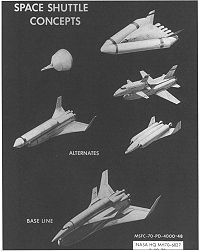 During the early shuttle studies, there was a debate over the optimal shuttle design that best balanced capability, development cost, and operational cost. Initially a fully reusable design was preferred. This involved a very large winged manned booster which would carry a smaller winged manned orbiter. The booster vehicle would lift the orbiter to a certain altitude and speed, then separate. The booster would return and land horizontally, while the orbiter continued into low earth orbit. After completing its mission, the winged orbiter would reenter and land horizontally on a runway. The idea was that full reusability would promote lower operating costs.

However further studies showed a huge booster was needed to lift an orbiter with the desired payload capability. In space and aviation systems, cost is closely related to weight, so this meant the overall vehicle cost would be very high. Both booster and orbiter would have rocket engines plus jet engines for use within the atmosphere, plus separate fuel and control systems for each propulsion mode. In addition there were concurrent discussions about how much funding would be available to develop the program.

Another competing approach was maintaining the Saturn V production line and using its large payload capacity to launch a space station in a few payloads rather than many smaller shuttle payloads. A related concept was servicing the space station using the Air Force Titan II-M to launch a larger Gemini capsule, called "Big Gemini", rather than using the shuttle.

The shuttle supporters answered that given enough launches, a reusable system would have lower overall costs than disposable rockets. If dividing total program costs over a given number of launches, a high shuttle launch rate would result in lower per-launch costs. This in turn would make the shuttle cost competitive with or superior to expendable launchers. Some theoretical studies mentioned 55 shuttle launches per year, however the final design chosen would not support that launch rate. In particular the maximum external tank production rate was limited to 24 tanks per year at NASA's Michoud Assembly Facility.

The combined space station and Air Force payload requirements weren't sufficient to reach desired shuttle launch rates. Therefore the plan was for all future U.S. space launches—space station, Air Force, commercial satellites, and scientific research—to use only the space shuttle. Most other expendable boosters would be phased out.

The reusable booster was eventually abandoned due to a several factors: high price (combined with limited funding), technical complexity, and development risk. Instead, a partially (not fully) reusable design was selected, where an external propellent tank was discarded for each launch, and the booster rockets and shuttle orbiter were refurbished for reuse.

Initially the orbiter was to carry its own liquid propellant. However studies showed carrying the propellant in an external tank allowed a larger payload bay in an otherwise much smaller craft. It also meant throwing away the tank after each launch, but this was a relatively small portion of operating costs.

Earlier designs assumed the winged orbiter would also have jet engines to assist maneuvering in the atmosphere after reentering. However NASA ultimately chose a gliding orbiter, based partially on experience from previous rocket-then-glide vehicles such as the X-15 and lifting bodies. Omitting the jet engines and their fuel would reduce complexity and increase payload.

The last remaining debate was over the nature of the boosters. NASA examined four solutions to this problem: development of the existing Saturn lower stage, simple pressure-fed liquid-fuel engines of a new design, a large single solid rocket, or two (or more) smaller ones. Engineers at NASA's Marshall Space Flight Center (where the Saturn V development was managed) were particularly concerned about solid rocket reliability for manned missions. 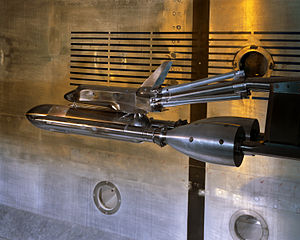 NASA eventually decided to use the smaller solid rocket boosters, due to their lower projected development costs relative to a liquid propellant booster.[2] While a liquid-fueled booster design provided better performance, lower per-flight costs, less environmental impact and less developmental risk, solid boosters were seen as requiring less funding to develop at a time when the Shuttle program had many different elements competing for limited development funds. The final design which was selected was a winged orbiter with three liquid fueled engines, a large expendable external tank which held liquid propellant for these engines, and two reusable solid rocket boosters.

Opinions differ on the lessons of the Shuttle. It was developed with the original development cost and time estimates given to President Richard M. Nixon in 1971,[3] at a cost of US$6.744 billion in 1971 dollars versus an original $5.15 billion estimate.[4] The operational costs, flight rate, payload capacity, and reliability have been different than anticipated, however.[3]

One area of Space Shuttle applications is an expanded crew.[5] Crews of up to 8 have been flown in the Orbiter, but it can hold at least a crew of ten.[5] Various proposals for filling the payload bay with additional passengers have also been proposed as early as 1979.[6] A proposal by Rockwell provided seating for 74 passengers in the Orbiter payload bay, with support for three days in Earth orbit.[6] With a smaller 64 seat orbiter, costs for the late 1980s would be around 1.5 million USD per seat per launch.[7] The Rockwell passenger module had two decks, 4 seats across on top and 2 on the bottom, including a 25 inch (63.5 cm) wide aisle and extra storage space.[7]

Another design was Space Habitation Design Associates 1983 proposal for 72 passengers in the Space Shuttle Payload bay.[7] Passengers were located in 6 sections, each with windows and its own loading ramp at launch, and with seats in different configurations for launch and landing.[7] Another proposal was based on the Spacelab habitation modules, which provided 32 seats in the payload bay in addition to those in the cockpit area.[7]