In astrodynamics orbital station-keeping is a term used to describe the orbital maneuvers made by thruster burns that are needed to keep a spacecraft in a particular assigned orbit.

For spacecraft in low orbits the effects of air-drag must often be compensated for. For some missions this is needed simply to avoid re-entry. For other missions, typically missions for which the orbit should be accurately synchronized with the Earth rotation, this is necessary to avoid that the orbital period gets shorter.

The solar radiation pressure will in general perturb the eccentricity (i.e. the eccentricity vector), see Orbital perturbation analysis (spacecraft). For some missions this must be actively counter-acted with maneuvers. For geostationary spacecraft the eccentricity must be kept sufficiently small for a spacecraft to be tracked with a non-steerable antenna. Also for Earth observation spacecraft for which a very repetitive orbit with a fixed ground track is desirable the eccentricity vector should be kept as fixed as possible. A large part of this compensation can be done by using a frozen orbit design but for the fine control maneuvers with thrusters are needed.

For spacecraft in a halo orbit around a Lagrangian point the station keeping is even more fundamental as such an orbit is instable, without an active control with thruster burns the smallest deviation in position/velocity would result in that the spacecraft would leave the orbit completely.

For a spacecraft in a very low orbit the air-drag is sufficiently strong to cause a re-entry before the intended end of mission if orbit raising maneuvers are not executed from time to time. A typical example of this is the International Space Station which has an operational altitude above Earth surface of between 330 and 410 km. Due to atmospheric drag the space station is constantly losing orbital energy. In order to compensate for this loss, which would eventually lead to a reentry of the station, it is from time to time being re-boosted to a higher orbit. The chosen orbital altitude is a trade-off between the delta-v needed to counter-act the air drag and the delta-v needed to send payloads and people to the station. The upper limitation of orbit altitude is due to the constraints imposed by the Soyuz spacecraft. On 25 April 2008, the Automated Transfer Vehicle "Jules Verne" raised the orbit of the ISS for the first time, thereby proving its ability to replace (and outperform) the Soyuz at this task.[citation needed]

For Earth observation spacecraft typically operated in an altitude above the Earth surface of about 700 - 800 km the air-drag is very faint and a re-entry due to air-drag is not a concern. But if the orbital period should be synchronous with the Earth rotation to maintain a fixed ground track also the faint air-drag at this high altitude must be counter-acted by orbit raising maneuvers in the form of thruster burns tangential to the orbit. These maneuvers will be very small, typically in the order of a few mm/s of delta-v. If a frozen orbit design is used these very small orbit raising maneuvers are sufficient to also control the eccentricity vector.

To maintain a fixed ground track it is also necessary to make out-of-plane maneuvers to compensate for the inclination change caused by Sun/Moon gravitation. These are executed as thruster burns orthogonal to the orbital plane. For Sun-synchronous spacecraft having a constant geometry relative to the Sun the inclination change due to the solar gravitation is particularly large, a delta-v in the order of 1-2 m/s per year can be needed to to keep the inclination constant. 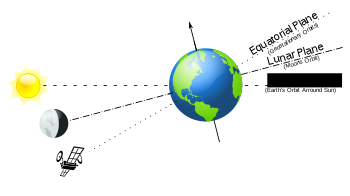 For geostationary spacecraft thruster burns orthogonal to the orbital plane must be executed to compensate for the effect of the luni/solar gravitation that perturbs the orbit pole with typically 0.85 degrees per year. The delta-v needed to compensate for this perturbation keeping the inclination to the equatorial plane small amounts to in the order 45 m/s per year. This part of the GEO station-keeping is called North-South control.

To save weight, it is crucial for GEO satellites to have the most fuel-efficient propulsion system. Some modern satellites are therefore employing a high specific impulse system like plasma or ion thrusters.