The angular diameter or apparent size of an object as seen from a given position is the “visual diameter” of the object measured as an angle. In the vision sciences it is called the visual angle. The visual diameter is the diameter of the perspective projection of the object on a plane through its centre that is perpendicular to the viewing direction. Because of foreshortening, it may be quite different from the actual physical diameter for an object that is seen under an angle. For a disk-shaped object at a large distance, the visual and actual diameters are the same.

Diagram for the formula of the angular diameter

The angular diameter of an object can be calculated using the formula:

in which δ is the angular diameter, and d and D are the visual diameter of and the distance to the object, expressed in the same units. When D is much larger than d, δ may be approximated by the formula δ = d / D, in which case the result is in radians.

For a spherical object whose actual diameter equals dact, the angular diameter can be found with the formula:

For practical use, the distinction between the visual diameter d and the actual diameter dact only makes a difference for spherical objects that are relatively close.

The angular diameter of Earth's orbit around the Sun, from a distance of one parsec, is 2″ (two arcseconds).

This table shows the angular sizes of noteworthy celestial bodies as seen from the Earth:

The table shows that the angular diameter of Sun, when seen from Earth is approximately 32 arcminutes (1920 arcseconds or 0.53 degrees), as illustrated above. 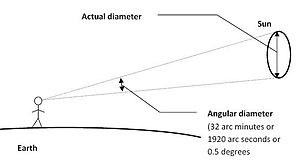 Angular diameter : the angle subtended by an object

The angular diameter of the Sun is about the same as that of the Moon (the diameter is 400 times as large and the distance also; the Sun is 200,000 to 500,000 times as bright as the full Moon (figures vary), corresponding to an angular diameter ratio of 450 to 700, so a celestial body with a diameter of 2.5 to 4″ and the same brightness per unit solid angle would have the same brightness as the full Moon).

Even though Pluto is physically larger than Ceres, when viewed from Earth, e.g. through the Hubble Space Telescope, Ceres has a much larger apparent size.

While angular sizes measured in degrees are useful for larger patches of sky (in the constellation of Orion, for example, the three stars of the belt cover about 3 degrees of angular size), we need much finer units when talking about the angular size of galaxies, nebulae or other objects of the night sky.

Degrees, therefore, are subdivided as follows:

To put this in perspective, the full moon viewed from earth is about ½ degree, or 30 arc minutes (or 1800 arc-seconds). The moon's motion across the sky can be measured in angular size: approximately 15 degrees every hour, or 15 arc-seconds per second. A one-mile-long line painted on the face of the moon would appear to us to be about one arc-second in length.

In astronomy, it is typically difficult to directly measure the distance to an object. But the object may have a known physical size (perhaps it is similar to a closer object with known distance) and a measurable angular diameter. In that case, the angular diameter formula can be inverted to yield the Angular diameter distance to distant objects as

In non-Euclidean space, such as our expanding universe, the angular diameter distance is only one of several definitions of distance, so that there can be different "distances" to the same object. See Distance measures (cosmology).

Many deep sky objects such as galaxies and nebulas are non-circular and are thus typically given two measures of diameter: Major Diameter and Minor Diameter. For example, the Small Magellanic Cloud has a visual apparent diameter of 5° 20′ × 3° 5′.