DVB-T is an abbreviation for Digital Video Broadcasting — Terrestrial; it is the DVB European-based consortium standard for the broadcast transmission of digital terrestrial television that was first published in 1997[1] and first broadcast in the UK in 1998.[2] This system transmits compressed digital audio, digital video and other data in an MPEG transport stream, using coded orthogonal frequency-division multiplexing (COFDM or OFDM) modulation.

Rather than carrying the data on a single radio frequency (RF) carrier, OFDM works by splitting the digital data stream into a large number of slower digital streams, each of which digitally modulate a set of closely spaced adjacent carrier frequencies. In the case of DVB-T, there are two choices for the number of carriers known as 2K-mode or 8K-mode. These are actually 1,705 or 6,817 carriers that are approximately 4 kHz or 1 kHz apart.

DVB-T has been adopted or proposed for digital television broadcasting by many countries (see map), using mainly VHF 7 MHz and UHF 8 MHz channels whereas Taiwan, Colombia, Panama, Trinidad and Tobago and the Philippines use 6 MHz channels. Examples include the UK's Freeview.

The DVB-T Standard is published as EN 300 744, Framing structure, channel coding and modulation for digital terrestrial television. This is available from the ETSI website, as is ETSI TS 101 154, Specification for the use of Video and Audio Coding in Broadcasting Applications based on the MPEG-2 Transport Stream, which gives details of the DVB use of source coding methods for MPEG-2 and, more recently, H.264/MPEG-4 AVC as well as audio encoding systems. Many countries that have adopted DVB-T have published standards for their implementation. These include the D-book in the UK, the Italian DGTVi,[3] the ETSI E-Book and Scandivia NorDig.

DVB-T has been further developed into newer standards such as DVB-H (Handheld), now in operation, and DVB-T2, which was recently finalised.

DVB-T as a digital transmission delivers data in a series of discrete blocks at the symbol rate. DVB-T is a COFDM transmission technique which includes the use of a Guard Interval. It allows the receiver to cope with strong multipath situations. Within a geographical area, DVB-T also allows single-frequency network (SFN) operation, where two or more transmitters carrying the same data operate on the same frequency. In such cases the signals from each transmitter in the SFN needs to be accurately time-aligned, which is done by sync information in the stream and timing at each transmitter referenced to GPS.

The length of the Guard Interval can be chosen. It is a trade off between data rate and SFN capability. The longer the guard interval the larger is the potential SFN area without creating intersymbol interference (ISI). It is possible to operate SFNs which do not fulfill the guard interval condition if the self-interference is properly planned and monitored.

Technical description of a DVB-T transmitter

Scheme of a DVB-T transmission system

With reference to the figure, a short description of the signal processing blocks follows.

Source coding and MPEG-2 multiplexing (MUX)
compressed video, compressed audio, and data streams are multiplexed into MPEG program streams (MPEG-PSs). One or more MPEG-PSs are joined together into an MPEG transport stream (MPEG-TS); this is the basic digital stream which is being transmitted and received by TV sets or home Set Top Boxes (STB). Allowed bitrates for the transported data depend on a number of coding and modulation parameters: it can range from about 5 to about 32 Mbit/s (see the bottom figure for a complete listing).
Splitter
two different MPEG-TSs can be transmitted at the same time, using a technique called Hierarchical Transmission. It may be used to transmit, for example a standard definition SDTV signal and a high definition HDTV signal on the same carrier. Generally, the SDTV signal is more robust than the HDTV one. At the receiver, depending on the quality of the received signal, the STB may be able to decode the HDTV stream or, if signal strength lacks, it can switch to the SDTV one (in this way, all receivers that are in proximity of the transmission site can lock the HDTV signal, whereas all the other ones, even the farthest, may still be able to receive and decode an SDTV signal).
MUX adaptation and energy dispersal
the MPEG-TS is identified as a sequence of data packets, of fixed length (188 bytes). With a technique called energy dispersal, the byte sequence is decorrelated.
External encoder
a first level of error correction is applied to the transmitted data, using a non-binary block code, a Reed-Solomon RS (204, 188) code, allowing the correction of up to a maximum of 8 wrong bytes for each 188-byte packet.
External interleaver
convolutional interleaving is used to rearrange the transmitted data sequence, in such a way that it becomes more rugged to long sequences of errors.
Internal encoder
a second level of error correction is given by a punctured convolutional code, which is often denoted in STBs menus as FEC (Forward error correction). There are five valid coding rates: 1/2, 2/3, 3/4, 5/6, and 7/8.
Internal interleaver
data sequence is rearranged again, aiming to reduce the influence of burst errors. This time, a block interleaving technique is adopted, with a pseudo-random assignment scheme (this is really done by two separate interleaving processes, one operating on bits and another one operating on groups of bits).
Mapper
the digital bit sequence is mapped into a base band modulated sequence of complex symbols. There are three valid modulation schemes: QPSK, 16-QAM, 64-QAM.
Frame adaptation
the complex symbols are grouped in blocks of constant length (1512, 3024, or 6048 symbols per block). A frame is generated, 68 blocks long, and a superframe is built by 4 frames.
Pilot and TPS signals
in order to simplify the reception of the signal being transmitted on the terrestrial radio channel, additional signals are inserted in each block. Pilot signals are used during the synchronization and equalization phase, while TPS signals (Transmission Parameters Signalling) send the parameters of the transmitted signal and to unequivocally identify the transmission cell. The receiver must be able to synchronize, equalize, and decode the signal to gain access to the information held by the TPS pilots. Thus, the receiver must know this information beforehand, and the TPS data is only used in special cases, such as changes in the parameters, resynchronizations, etc. 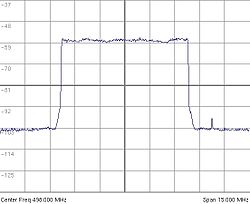 Spectrum of a DVB-T signal in 8k mode (note the flat-top characteristics).

OFDM Modulation
the sequence of blocks is modulated according to the OFDM technique, using 2048, 4096, or 8192 carriers (2k, 4k, 8k mode, respectively). Increasing the number of carriers does not modify the payload bit rate, which remains constant.
Guard interval insertion
to decrease receiver complexity, every OFDM block is extended, copying in front of it its own end (cyclic prefix). The width of such guard interval can be 1/32, 1/16, 1/8, or 1/4 that of the original block length. Cyclic prefix is required to operate single frequency networks, where there may exist an ineliminable interference coming from several sites transmitting the same program on the same carrier frequency.
DAC and front-end
the digital signal is transformed into an analogue signal, with a digital-to-analogue converter (DAC), and then modulated to radio frequency (VHF, UHF) by the RF front-end. The occupied bandwidth is designed to accommodate each single DVB-T signal into 5, 6, 7, or 8 MHz wide channels. The base band sample rate provided at the DAC input depends on the channel bandwidth: it is

samples/s, where B is the channel bandwidth expressed in Hz.

Technical description of the receiver

The receiving STB adopts techniques which are dual to those ones used in the transmission. 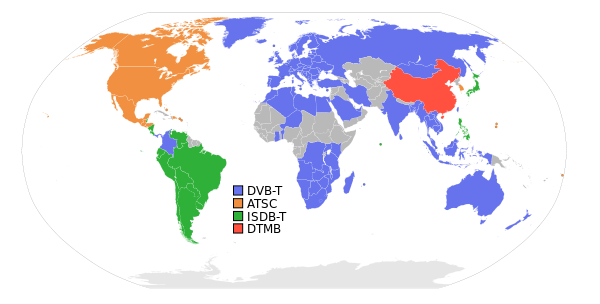