MPEG transport stream (TS) is a standard format for transmission and storage of audio, video, and Program and System Information Protocol (PSIP) data,[7] and is used in broadcast systems such as DVB and ATSC. 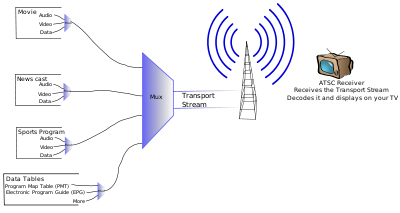 Multiple MPEG programs are combined then sent to a transmitting antenna. In the US broadcast digital TV system, an ATSC receiver then decodes the TS and displays it. In most other parts of the world, transmission would be accomplished by one or more variants of the modular DVB system.

Similar to the OSI network protocol stack, a transport stream is processed by the receiver in layers. An example stream containing video may be processed as follows:

An example of data that is muxed into the transport stream is an electronic program guide. See Program and System Information Protocol for more information.

Important elements of a transport stream

A packet is the basic unit of data in a transport stream. It consists of a sync byte, whose value is 0x47, followed by three one-bit flags and a 13-bit Packet Identifier (PID). This is followed by a 4-bit continuity counter. Additional optional transport fields, as signaled in the optional adaptation field, may follow. The rest of the packet consists of payload. Packets are 188 bytes in length[5] , but the communication medium may add some error correction bytes to the packet. ISDB-T and DVB-T/C/S uses 204 bytes and ATSC 8-VSB, 208 bytes as the size of emission packets (transport stream packet + FEC data). ATSC transmission adds 20 bytes of Reed-Solomon forward error correction to create a packet that is 208 bytes long.[8] The 188-byte packet size was originally chosen for compatibility with ATM systems.[9][10]

Transport stream has a concept of programs. Each single program is described by a Program Map Table (PMT) which has a unique PID, and the elementary streams associated with that program have PIDs listed in the PMT. For instance, a transport stream used in digital television might contain three programs, to represent three television channels. Suppose each channel consists of one video stream, one or two audio streams, and any necessary metadata. A receiver wishing to decode a particular "channel" merely has to decode the payloads of each PID associated with its program. It can discard the contents of all other PIDs. A transport stream with more than one program is referred to as MPTS - Multi Program Transport Stream. A single program transport stream is referred to as SPTS - Single Program Transport Stream.

There are 4 PSI tables: Program Association (PAT), Program Map (PMT), Conditional Access (CAT), and Network Information (NIT). The MPEG-2 specification does not specify the format of the CAT and NIT.

PAT stands for Program Association Table. It lists all programs available in the transport stream. Each of the listed programs is identified by a 16-bit value called program_number. Each of the programs listed in PAT has an associated value of PID for its Program Map Table (PMT).

The value 0x0000 of program_number is reserved to specify the PID where to look for Network Information Table (NIT). If such a program is not present in PAT the default PID value (0x0010) shall be used for NIT.

Program Map Tables (PMTs) contain information about programs. For each program, there is one PMT. While the MPEG-2 standard permits more than one PMT section to be transmitted on a single PID, most MPEG-2 "users" such as ATSC and SCTE require each PMT to be transmitted on a separate PID that is not used for any other packets. The PMTs provide information on each program present in the transport stream, including the program_number, and list the elementary streams that comprise the described MPEG-2 program. There are also locations for optional descriptors that describe the entire MPEG-2 program, as well as an optional descriptor for each elementary stream. Each elementary stream is labeled with a stream_type value.

To enable a decoder to present synchronized content, such as audio tracks matching the associated video, at least once each 100 ms a Program Clock Reference, or PCR is transmitted in the adaptation field of an MPEG-2 transport stream packet. The PID with the PCR for an MPEG-2 program is identified by the pcr_pid value in the associated Program Map Table. The value of the PCR, when properly used, is employed to generate a system_timing_clock in the decoder. The STC decoder, when properly implemented, provides a highly accurate time base that is used to synchronize audio and video elementary streams. Timing in MPEG2 references this clock, for example the presentation time stamp (PTS) is intended to be relative to the PCR. The first 33 bits are based on a 90 kHz clock. The last 9 are based on a 27 MHz clock. The maximum jitter permitted for the PCR is +/- 500 ns.

Some transmission schemes, such as those in ATSC and DVB, impose strict constant bitrate requirements on the transport stream. In order to ensure that the stream maintains a constant bitrate, a Multiplexer may need to insert some additional packets. The PID 0x1FFF is reserved for this purpose. The payload of null packets may not contain any data at all, and the receiver is expected to ignore its contents.

Transport Stream had been originally designed for broadcast. Later it was adapted for usage with digital video cameras, recorders and players by adding a 4-byte timecode (TC) to standard 188-byte packets, which resulted in a 192-byte packet.[14][15] This is what is informally called M2TS stream. Blu-ray Disc Association calls it "BDAV MPEG-2 transport stream".[14] JVC called it TOD (possibly an abbreviation for "Transport stream on disc") when used in HDD-based camcorders like GZ-HD7.[16][17] M2TS transport stream is also used for recording HDV video (onto tape and onto file-based media), and for AVCHD video files, which often have MTS extension.[18] The timecode allows quick access to any part of the stream either from a media player, or from a non-linear video editing system.[19] It is also used to synchronize video streams from several cameras in a multi-camera shoot.