Composite video
Not to be confused with Component video. 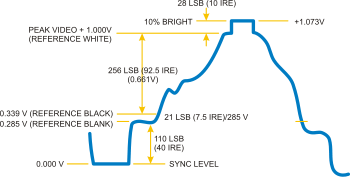 Composite video is the format of an analog television (picture only) signal before it is combined with a sound signal and modulated onto an RF carrier. In contrast to component video (YPbPr) it contains all required video information, including colors in a single line-level signal. Like component video, composite-video cables do not carry audio and are often paired with audio cables (see RCA connector).

It is usually in standard formats such as NTSC, PAL, and SECAM.

A composite video signal combines on one wire the video information required to recreate a color picture, as well as line and frame synchronization pulses. The color video signal is a linear combination of the luminance of the picture, and a modulated subcarrier carries the chrominance or color information, a combination of hue and saturation. Details of the encoding process vary between the NTSC, PAL and SECAM systems.

The frequency spectrum of the modulated color signal overlaps that of the baseband signal, and separation relies on the fact that frequency components of the baseband signal tend to be near harmonics of the horizontal scanning rate, while the color carrier is selected to be an odd multiple of half the horizontal scanning rate; this produces a modulated color signal that consists mainly of harmonic frequencies that fall between the harmonics in the baseband luma signal, rather than both being in separate continuous frequency bands alongside each other in the frequency domain. In other words, the combination of luma and chroma is indeed a frequency-division technique, but it is much more complex than typical frequency division multiplexing systems like the one used to multiplex analog radio stations on both the AM and FM bands.

Colorburst is a composite analog video signal generated by a video-signal generator used to genlock, keep the chrominance subcarrier synchronized in television studios for color television.

Composite video can easily be directed to any broadcast channel simply by modulating the proper RF carrier frequency with it. Most home analog video equipment record a signal in (roughly) composite format: LaserDiscs store a true composite signal, while consumer videotape formats (including VHS and Betamax) and lesser commercial and industrial tape formats (including U-Matic) use modified composite signals (generally known as "color-under").[citation needed] On playback, these devices often give the user the option to outputting the baseband signal or to modulating it onto a VHF or UHF frequency compatible with a TV tuner (i.e. appearing on a selected TV channel). The professional television production uncompressed digital video videocassette format known as D-2 (video), directly recorded and reproduced standard NTSC composite video signals, using PCM encoding of the analog signal on the magnetic tape.

In Europe, SCART connections are often used instead of RCA jacks (and to a lesser extent, S-Video), so where available, RGB is used instead of composite video with computers, video game consoles, and DVD players.

Some devices that connect to a TV, such as VCRs, older video game consoles and home computers of the 1980s, output a composite signal. This may then be converted to RF with an external box known as an RF modulator that generates the proper carrier (often for channel 3 or 4 in North America, channel 36 in Europe). Sometimes this modulator was built into the product (such as video game consoles, VCRs, or the Atari, Commodore 64, or TRS-80 CoCo home-computers) and sometimes it was an external unit powered by the computer (in the case of the TI-99 or some Apple modulators) or with an independent power supply. In the USA, using an external RF modulator frees the manufacturer from obtaining FCC approval for each variation of a device. Through the early-1980s, electronics that output a television channel signal were required to meet the same shielding requirements as broadcast television equipment, thus forcing manufacturers such as Apple to omit an RF modulator, and Texas Instruments to have their RF modulator as an external unit, which they had certified by the FCC without mentioning they were planning to sell it with a computer. In Europe, while most countries used the same broadcast standard, there were different modulation standards (PAL-G versus PAL-I, for example), and using an external modulator allowed manufacturers to make a single product and easily sell it to different countries by changing the modulator.

The process of modulating RF with the original video signal, and then demodulating the original signal again in the TV, introduces several losses. RF is also "noisy" because of all of the video and radio signals already being broadcast, so this conversion also typically adds noise or interference to the signal as well. For these reasons, it is typically best to use composite connections instead of RF connections if possible. Almost all modern video equipment has at least composite connectors, so this typically isn't a problem; however, older video equipment and some very low-end modern televisions have only RF input (essentially the antenna jack); while RF modulators are no longer common, they are still widely available to translate baseband signals for older equipment.

However, just as the modulation and demodulation of RF loses quality, the mixing of the various signals into the original composite signal does the same, causing a checkerboard video artifact known as dot crawl. Dot crawl is an infamous defect that results from crosstalk due to the intermodulation of the chrominance and luminance components of the signal. This is usually seen when chrominance is transmitted with a high bandwidth, and its spectrum reaches into the band of the luminance frequencies. This has led to a proliferation of systems such as S-Video and component video to maintain the signals separately. Comb filters are also commonly used to separate signals, and eliminate artifacts, from composite sources.

When used for connecting a video source to a video display that supports both 4:3 and 16:9 display formats, the PAL television standard provides for signalling pulses that will automatically switch the display from one format to the other. The Composite video connection supports this operation. However the NTSC television standard has no such provision, and thus the display must be manually switched.

Extensions to the composite video standard

Since TV screens hide the vertical blanking interval of a composite video signal and even crop the edges of the picture, extensions have been implemented by taking advantage of these unseen parts of the signal. Examples of these extensions include teletext, closed captioning, digital information regarding the show title, transmitting a set of reference colors that allows TV sets to automatically correct the hue mal-adjustments common with the NTSC color encoding system, etc.