Differential gain is a kind of linearity distortion which affects the color saturation in TV broadcasting.

The modulation technique of the color subcarrier is quadrature amplitude modulation (QUAM ) both in PAL and NTSC systems. The amplitude of the color signal represents the saturation (purity) in both systems. On the other hand, the level of the CVS represents the brightness. So in order to reproduce the original vision in the receiver the ratio between these two pieces of information should be kept constant in the receiver.

Non linearity in the broadcast system

The main steps of visual signal from the scene to receiver screen (for terrestrial broadcasting) are as follows:

All of the above circuitry include active circuit devices. These devices are only approximatelly linear devices. In particular, amplification factor is not constant for all levels. Usually the amplification factor decreases as the input level increases. This is known as gain nonlinearity. In system specifications, the nonlinearity in percentage is almost always specified. It must be under a tolerable level depending on the required sensitivity of the system.

Differential gain is a special case of gain nonlinearity. Let CCVS is given by

The output of an ideal amplifier with the amplification factor of A is;

However, in practice this goal is almost never attained. The amplification factor of color signal is always slightly different than that of CVS. (The color signal is superimposed on CVS.) 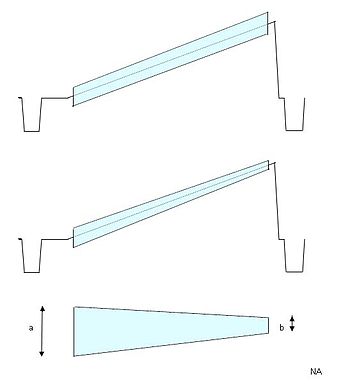 To measure the percentage of differential gain, the standart sawtooth signal with superimposed color carrier is used. (4.43 MHz. in PAL and 3.58 MHz. in NTSC) The sawtooth represents the CVS with all possible levels between 0.3 v to 1 V. The waveforms are shown in the accompanying image frame.The top figure shows the input. Note that the amplitude of the superimposed color signal is constant. The middle figure shows the distorted output. In this example, color signal superimposed on a high level luminance signal has been attenuated.The bottom figure shows the same waveform after passing through a high pass filter to facilitate measuring. (CVS is filtered out leaving only color signal) .

According to European standarts DG should be less than % 10.

A special case of PAL

DG is a problem both in NTSC and PAL. But PAL is more sensetive to this kind of distortion. System PAL averages phase differences of color signal in two consecutive lines[1]. Let α be the phase lag.

So the phase differences between two consecutive lines (so called differential phase) are converted to differential gain distortions. ( Hue is preserved at the risk of decreased saturation)

For example, a differential phase of 100 introduces an additional gain loss of % 2.