DisplayPort is a digital display interface standard produced by the Video Electronics Standards Association (VESA). The specification defines a royalty-free digital interconnect for audio and video. The interface is primarily used to connect a video source to a display device such as a computer monitor or television set.

DisplayPort is designed to replace Digital Visual Interface (DVI) and Video Graphics Array (VGA), as well as replace internal digital LVDS links in computer monitor panels and TV panels. DisplayPort can also provide the same functionality as HDMI but is not expected to displace HDMI in high-definition consumer electronics devices.[5]

DisplayPort is the first display interface to rely on packetized data transmission similar to other data communication protocols such as Ethernet, USB, and PCI Express. It supports both external (box-to-box) and internal (laptop LCD panel) display connections, and unlike DVI/HDMI and LVDS standards where differential pairs are fixed to transmitting RGB pixels and a clock signal, the DisplayPort protocol is based on small data packets with clock embedded. The use of data packets also allows for DisplayPort to be extensible, meaning additional features can be added over time without significant changes to the interface itself.[6]

Both video and audio signals are optional; a Displayport signal can be used to transport audio-only content, video-only content, or both audio and video simultaneously. The video signal path supports 6 to 16 bits per color channel, and the audio path supports up to 8 channels of 24 bit 192 kHz uncompressed PCM audio which can encapsulate compressed audio formats in the audio stream.[7] A bi-directional, half-duplex auxiliary channel carries device management and device control data for the Main Link, such as VESA EDID, MCCS, and DPMS standards. In addition, the interface is capable of carrying bi-directional USB signals.[8]

The DisplayPort signal is not compatible with HDMI or DVI. However, dual-mode ports marked with a DP++ logo can transmit single-link HDMI and DVI signals through DisplayPort cabling; this requires passive external adapters which convert to the higher signal levels used by DVI/HDMI. Dual-link DVI and analog VGA are supported through powered adapters which perform active conversion[7] (see Compatibility with HDMI/DVI below).

DisplayPort 1.0 supports a maximum of 8.64 Gbit/s data rate over a 2 meter cable.[9] DisplayPort 1.1 also supports devices which implement alternative link layers such as fiber optic, allowing a much longer reach between source and display without signal degradation,[10] although alternative implementations are not standardized. It also supports HDCP in addition to DisplayPort Content Protection (DPCP).

DisplayPort version 1.2 was approved on December 22, 2009. The most significant improvement of the new version is the doubling of the effective bandwidth to 17.28 Gbit/s, which allows increased resolutions, higher refresh rates, and greater color depth. Other improvements include multiple independent video streams (daisy-chain connection with multiple monitors), support for stereoscopic 3D, increased AUX channel bandwidth (from 1 Mbit/s to 720 Mbit/s), support for more color spaces including xvYCC, scRGB and Adobe RGB 1998, and Global Time Code (GTC) for sub 1 µs audio/video synchronisation. Also Apple Inc.'s Mini DisplayPort connector, which is much smaller and more appropriate for laptop computers and other small devices, is compatible with the new standard.[11][12][13][7][14]

Embedded DisplayPort (eDP) 1.0 standard was adopted in December 2008. It aims to define a standardized display panel interface for internal connections; e.g., graphics cards to notebook display panels.[15] It supports advanced power-saving features including seamless refresh rate switching. Version 1.1 was approved in October 2009 followed by version 1.1a in November 2009. Version 1.2 was approved in May 2010 and supports DisplayPort 1.2 data rates, 120 Hz sequential color monitors, and a new display panel control protocol that works through the AUX channel.[14] Version 1.3 was published in February 2011; it includes a new Panel Self-Refresh (PSR) feature developed to save system power and further extend battery life in portable PC systems.[16] PSR mode allows GPU to enter power saving state in between frame updates by including framebuffer memory in the display panel controller.[14]

Direct Drive Monitor 1.0 standard was approved in December 2008. It allows for controller-less monitors where the display panel is directly driven by the DisplayPort signal, although the supported resolutions and color depth are limited to 2-lane operation.

Internal DisplayPort (iDP) 1.0 was approved in April 2010. The iDP standard defines an internal link between a digital TV system on a chip controller and the display panel's timing controller. It aims to replace currently used internal LVDS lanes with DisplayPort connection.[17] iDP features unique physical interface and protocols, which are not directly compatible with DisplayPort and are not applicable to external connection, however they enable very high resolution and refresh rates while providing simplicity and extensibility.[14] iDP features non-variable 2.7 GHz clock and is nominally rated at 3.24 Gbit/s data rate per lane, with up to 16 lanes in a bank, resulting in 6-fold decrease in wiring requirements over LVDS for a 1080p24 signal;[7] other data rates are also possible. iDP was built with simplicity in mind and it doesn't support AUX channel, content protection, or multiple streams; however it does support frame sequential and line interleaved stereo 3D.[14]

Portable Digital Media Interface (PDMI) is an interconnection between docking stations/display devices and portable media players, which includes 2-lane DisplayPort v1.1a connection.[7] It has been ratified in February 2010 as ANSI/CEA-2017-A.

Wireless DisplayPort is a standard which will enable DisplayPort 1.2 bandwidth and feature set for cable-free applications operating in 60 GHz radio band; this was announced on November 2010 by WiGig Alliance and VESA as a cooperative effort.[18]

DisplayPort 1.0 includes optional DPCP (DisplayPort Content Protection) from Philips, which uses 128-bit AES encryption. It also features full authentication and session key establishment (each encryption session is independent). There is an independent revocation system. This portion of the standard is licensed separately. It also adds support for verifying the proximity of the receiver and transmitter, a technique intended to ensure users are not bypassing the content protection system to send data out to distant, unauthorized users.

DisplayPort 1.1 added support for industry-standard 56-bit HDCP (High-bandwidth Digital Content Protection) revision 1.3, which has been compromised in September 2010 with the release of HDCP master key.

DisplayPort is capable of directly emitting single-link HDMI and DVI signals using Dual-mode DisplayPort. VESA has issued interoperability guidelines for supporting single-link DVI and HDMI through a DisplayPort connection using a relatively simple passive adapter that adjusts for the lower voltages required by DisplayPort.[20][21] Dual-mode DisplayPort chipset detects the DVI or HDMI passive adapter and switches to DVI/HDMI mode which uses the 4-lane main DisplayPort link and AUX channel link to transmit 3 TMDS signals plus a Clock signal and Display Data Channel data/clock from the chipset. Dual-mode compatible ports are marked with the DP++ logo; most current DisplayPort graphics cards and monitors support this mode.[7]

A notable limitation is that dual-mode can only transmit single-link DVI/HDMI, as the number of pins in the DisplayPort connector is insufficient for dual-link connections and an active converter is needed for Dual-Link DVI (and analog component video such as VGA); however, VESA foresees that all HDMI conversion will eventually be handled by active adapters which act as DisplayPort Sink devices, in order to facilitate easier updates to latest HDMI specs and support multiple streams, dual-link HDMI,[7] or DisplayPort connection with fewer than 4 lanes, as in PDMI. DVI 1.0 spec was finalized in 1999 and the DVI industry consortium has since disbanded, which means future updates to DVI specification are unlikely; also, although dual-link HDMI Type B is defined in the HDMI specification, it has not seen any practical use so far.

Most of the DisplayPort supporters are computer companies including Apple, Dell, HP, Lenovo, Fujitsu, Toshiba and Acer, some of which have released several computer monitors that support DisplayPort and some also with HDMI.[22][23]

DisplayPort lacked native support for the xvYCC color space, but that has been added in DisplayPort version 1.2. HDMI supports Consumer Electronics Control (CEC) signals, and these are lacking from DisplayPort.[24][25] However, VESA asserts that CEC can be transmitted over the AUX channel if needed;[7] additional color spaces defined in Vendor Specific Block could also be defined using CEA EDID extensions, which were designed for DVI-mode connections which lack VSB communications.

DisplayPort is currently royalty free, while the HDMI royalty is 4 cents per device and has an annual fee of $10,000 for high volume manufacturers.[26] HDMI Licensing LLC claims that, like HDMI, the DisplayPort specification allows for compensation from implementers to unspecified rights holders.[27]

In December 2010 it was announced that several computer vendors and display makers including Intel, AMD, Dell, Lenovo, Samsung and LG would stop using LVDS from 2013 and legacy DVI and VGA connectors from 2015, replacing them with DisplayPort and HDMI.[28] Likewise, HP expects that DisplayPort will completely displace VGA and DVI by 2013.[29] However, many are still using those connectors, so it doesn't seem to have much effect right now. Most laptops still have HDMI and legacy VGA ports, but not DisplayPort or DVI.[30][31]

Legacy interfaces such as VGA, DVI and LVDS have not kept pace, and newer standards such as DisplayPort and HDMI clearly provide the best connectivity options moving forward. In our opinion, DisplayPort 1.2 is the future interface for PC monitors, along with HDMI 1.4a for TV connectivity.

DisplayPort has several advantages over VGA, DVI and LVDS. 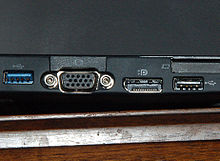 Since its introduction in 2006, DisplayPort has slowly gained popularity within the computer industry, and as of 2010, DisplayPort connectors are featured on many graphic cards, displays, and notebook computers.

AMD/ATI Technologies was the first company to release consumer products with an external DisplayPort transmitter with their 790G chipset and Radeon HD 2000 series graphics cards, which were unveiled at AMD's Technology Analyst Day on July 25, 2007. They later implemented the DisplayPort transmitter on the GPU chip in Radeon HD 3600 and HD 3400 graphics products, unveiled at AMD Financial Analyst Day on 13 December 2007. These products received DisplayPort certification from VESA in March 2008.[32]

On 14 October 2008, Apple introduced several products featuring a Mini DisplayPort[35] as the sole video connector. This connector was proprietary at that time. Later, with versions 1.1a and 1.2 of the specification, it became part of the standard. Between October 2009 and February 2011, all Mac models feature Mini DisplayPort connector; during that time iMac, MacBook, MacBook Air, MacBook Pro, and Xserve models used Mini DisplayPort as their sole video output while the Mac Mini and Mac Pro models had both a Mini DisplayPort and either a DVI port (Mac Pro) or an HDMI port (Mac Mini). On February 24, 2011 MacBook Pros began shipping with Thunderbolt (known previously by Intel codename Light Peak) which provides both DisplayPort and PCI Express functionality in a single port. On May 3, 2011 Apple introduced their first iMac lineup with Thunderbolt built in. The iMac 21 in (53 cm) received one and the iMac 27 in (69 cm) received two Thunderbolt ports.

Apple's latest 24 in (61 cm) and 27 in (69 cm) LED Cinema Displays feature Mini DisplayPort connector. The recent 27-inch iMac model allows the Mini DisplayPort to act as an input, turning the iMac into a standalone display.[36]

A concept monitor by Dell implementing DisplayPort was demonstrated in early May 2007.[37]

The HP Elite L2201 21.5-inch (55 cm) released in June 2011 is the first monitor from Hewlett Packard to ship with a DisplayPort as the primary (and only) means of connectivity.[42] HP EliteBook laptops provide both a VGA and a DisplayPort connector.

The following companies have participated in preparing the drafts of DisplayPort, eDP, iDP, or DDM standards:

The following companies have additionally announced their intention to implement or support DisplayPort, eDP or iDP: