A framebuffer is a video output device that drives a video display from a memory buffer containing a complete frame of data.

The information in the memory buffer typically consists of color values for every pixel (point that can be displayed) on the screen. Color values are commonly stored in 1-bit binary (monochrome), 4-bit palettized, 8-bit palettized, 16-bit highcolor and 24-bit truecolor formats. An additional alpha channel is sometimes used to retain information about pixel transparency. The total amount of the memory required to drive the framebuffer depends on the resolution of the output signal, and on the color depth and palette size.

Framebuffers differ significantly from the vector displays that were common prior to the advent of the framebuffer. With a vector display, only the vertices of the graphics primitives are stored. The electron beam of the output display is then commanded to move from vertex to vertex, tracing an analog line across the area between these points. With a framebuffer, the electron beam (if the display technology uses one) is commanded to trace a left-to-right, top-to-bottom path across the entire screen, the way a television renders a broadcast signal. At the same time, the color information for each point on the screen is pulled from the framebuffer, creating a set of discrete picture elements (pixels).

Computer researchers had long discussed the theoretical advantages of a framebuffer, but were unable to produce a machine with sufficient memory at an economically practicable cost. In 1969, Joan Miller of Bell Labs experimented with the first known instance of a framebuffer. The device displayed an image with a color depth of three bits. However, it was not until the 1970s that advances in integrated-circuit memory made it practical to create the first framebuffer capable of holding a standard video image.

In 1972, Richard Shoup developed the SuperPaint system at Xerox PARC.[1] This system had 311,040 bytes of memory and was capable of storing 640 by 480 pixels of data with 8 bits of color depth. The memory was scattered across 16 circuit boards, each loaded with multiple 2-kilobit shift register chips. While workable, this design required that the total framebuffer be implemented as a 307,200 byte shift register that shifted in synchronization with the television output signal. The primary drawback to this scheme was that memory was not random access. Rather, a given position could be accessed only when the desired scan-line and pixel time rolled around. This gave the system a maximum latency of 33 ms for writing to the framebuffer.

Shoup was also able to use the SuperPaint framebuffer to create an early digital video-capture system. By synchronizing the output signal to the input signal, Shoup was able to overwrite each pixel of data as it shifted in. Shoup also experimented with modifying the output signal using color tables. These color tables allowed the SuperPaint system to produce a wide variety of colors outside the range of the limited 8-bit data it contained. This scheme would later become commonplace in computer framebuffers.

In 1974 Evans & Sutherland released the first commercial framebuffer, costing about $15,000. It was capable of producing resolutions of up to 512 by 512 pixels in 8-bit grayscale color, and became a boon for graphics researchers who did not have the resources to build their own framebuffer. The New York Institute of Technology would later create the first 24-bit color system using three of the Evans & Sutherland framebuffers.[2] Each framebuffer was connected to an RGB color output (one for red, one for green and one for blue), with a minicomputer controlling the three devices as one.

The rapid improvement of integrated-circuit technology made it possible for many of the home computers of the late 1970s (such as the Apple II) to contain low-color framebuffers. While initially derided for poor performance in comparison to the more sophisticated graphics devices used in computers like the Atari 400, framebuffers eventually became the standard for all personal computers. Today, nearly all computers with graphical capabilities utilize a framebuffer for generating the video signal.

Framebuffers also became popular in high-end workstations throughout the 1980s. SGI, Sun Microsystems, HP, DEC and IBM all released framebuffers for their computers. These framebuffers were usually of a much higher quality than could be found in most home computers, and were regularly used in television, printing, computer modeling and 3D graphics.

Amiga computers, due to their special design attention to graphics performance, created in the 1980s a vast market of framebuffer based graphics cards. Noteworthy to mention was the graphics card in Amiga A2500 Unix, which was in 1991 the first computer to implement an X11 server program as a server for hosting graphical environments and the Open Look GUI graphical interface in high resolution (1024x1024 or 1024x768 at 256 colors). The graphics card for A2500 Unix was called the A2410 (Lowell TIGA Graphics Card) and was an 8-bit graphics board based on the Texas Instruments TMS34010 clocked at 50 MHz. It was a complete intelligent graphics coprocessor. The A2410 graphics card for Amiga was co-developed with Lowell University. Other noteworthy Amiga framebuffer based cards were: the Impact Vision IV24 graphics card from GVP, an interesting integrated video suite, capable of mixing 24-bit framebuffer, with Genlock, Chromakey, TV signal pass-thru and TV in a window capabilities; the DCTV a graphics card and video capture system; the Firecracker 32-bit graphics card; the Harlequin card, the Colorburst; the HAM-E external framebuffer. The Graffiti external graphics card is still available on the market. 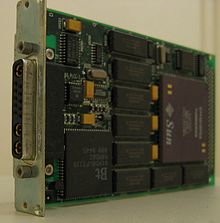 Framebuffers used in personal and home computing often had sets of defined "modes" under which the framebuffer could operate. These modes would automatically reconfigure the hardware to output different resolutions, color depths, memory layouts and refresh rate timings.

In the world of Unix machines and operating systems, such conveniences were usually eschewed in favor of directly manipulating the hardware settings. This manipulation was far more flexible in that any resolution, color depth and refresh rate was attainable – limited only by the memory available to the framebuffer.

An unfortunate side-effect of this method was that the display device could be driven beyond its capabilities. In some cases this resulted in hardware damage to the display.[3] More commonly, it simply produced garbled and unusable output. Modern CRT monitors fix this problem through the introduction of "smart" protection circuitry. When the display mode is changed, the monitor attempts to obtain a signal lock on the new refresh frequency. If the monitor is unable to obtain a signal lock, or if the signal is outside the range of its design limitations, the monitor will ignore the framebuffer signal and possibly present the user with an error message.

LCD monitors tend to contain similar protection circuitry, but for different reasons. Since the LCD must digitally sample the display signal (thereby emulating an electron beam), any signal that is out of range cannot be physically displayed on the monitor.

Framebuffers have traditionally supported a wide variety of color modes. Due to the expense of memory, most early framebuffers used 1-bit (2 color), 2-bit (4 color), 4-bit (16 color) or 8-bit (256 color) color depths. The problem with such small color depths is that a full range of colors cannot be produced. The solution to this problem was to add a lookup table to the framebuffers. Each "color" stored in framebuffer memory would act as a color index; this scheme was sometimes called "indexed color".

The lookup table served as a palette that contained data to define a limited number (such as 256) of different colors. However, each of those [256] colors, itself, was defined by more than 8 bits, such as 24 bits, eight of them for each of the three primary colors. With 24 bits available, colors can be defined far more subtly and exactly, as well as offering the full range gamut which the display can show. While having a limited total number of colors in an image is somewhat restrictive, nevertheless they can be well chosen, and this scheme is markedly superior to 8-bit color.

The data from the framebuffer in this scheme determined which of the [256] colors in the palette was for the current pixel, and the data stored in the lookup table (sometimes called the "LUT") went to three digital-to-analog converters to create the video signal for the display.

The framebuffer's output data, instead of providing relatively-crude primary-color data, served as an index – a number – to choose one entry in the lookup table. In other words, the index determined which color, and the data from the lookup table determined precisely what color to use for the current pixel.

While framebuffers are commonly accessed via a memory mapping directly to the CPU memory space, this is not the only method by which they may be accessed. Framebuffers have varied widely in the methods used to access memory. Some of the most common are:

The framebuffer organization may be chunky (packed pixel) or planar.

Many systems attempt to emulate the function of a framebuffer device, often for reasons of compatibility. The two most common "virtual" framebuffers are the Linux framebuffer device (fbdev) and the X Virtual Framebuffer (Xvfb). The X Virtual Framebuffer was added to the X Window System distribution to provide a method for running X without a graphical framebuffer. While the original reasons for this are lost to history, it is often used on modern systems to support programs such as the Sun Microsystems JVM that do not allow dynamic graphics to be generated in a headless environment.

The Linux framebuffer device was developed to abstract the physical method for accessing the underlying framebuffer into a guaranteed memory map that is easy for programs to access. This increases portability, as programs are not required to deal with systems that have disjointed memory maps or require bank switching.

Since framebuffers are often designed to handle more than one resolution, they often contain more memory than is necessary to display a single frame at lower resolutions. Since this memory can be considerable in size, a trick was developed to allow for new frames to be written to video memory without disturbing the frame that is currently being displayed.

Most modern framebuffers are manufactured with enough memory to perform this trick even at high resolutions. As a result, it has become a standard technique used by PC game programmers.

As the demand for better graphics increased, hardware manufacturers created a way to decrease the amount of CPU time required to fill the framebuffer. This is commonly called a "graphics accelerator" in the Unix world.

Common graphics drawing commands (many of them geometric) are sent to the graphics accelerator in their raw form. The accelerator then rasterizes the results of the command to the framebuffer. This method can save from thousands to millions of CPU cycles per command, as the CPU is freed to do other work.

While early accelerators focused on improving the performance of 2D GUI systems, most modern accelerators focus on producing 3D imagery in real time. A common design is to send commands to the graphics accelerator using a library such as OpenGL. The OpenGL driver then translates those commands to instructions for the accelerator's graphics processing unit (GPU). The GPU uses those microinstructions to compute the rasterized results. Those results are bit blitted to the framebuffer. The framebuffer's signal is then produced in combination with built-in video overlay devices (usually used to produce the mouse cursor without modifying the framebuffer's data) and any analog special effects that are produced by modifying the output signal. An example of such analog modification was the anti-aliasing technique used by the 3dfx Voodoo cards. These cards add a slight blur to output signal that makes aliasing of the rasterized graphics much less obvious.