Gui
This article is about "grilled dishes" in Korean cuisine. For GUI in technology, see Graphical user interface. For other usages, see Gui (disambiguation).

Gui or guee (Korean pronunciation: [ɡuːi]) is a generic term to refer to grilled dishes in Korean cuisine. These most commonly have meat or fish as their primary ingredient, but may in some cases also comprise grilled vegetables or other vegetarian ingredients. The term derives from the verb, "gupda" (굽다) in Korean, which literally means "grill". At traditional restaurants, meats are cooked at the center of the table over a charcoal grill, surrounded by various banchan and individual rice bowls. The cooked meat is then cut into small pieces and wrapped with fresh lettuce leaves, with rice, thinly sliced garlic, ssamjang (a mixture of gochujang and dwenjang), and other seasonings. The suffix gui is often omitted in the names of meat-based gui such as galbi, whose name is originally galbi gui. 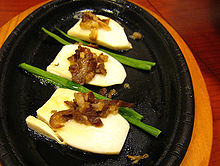