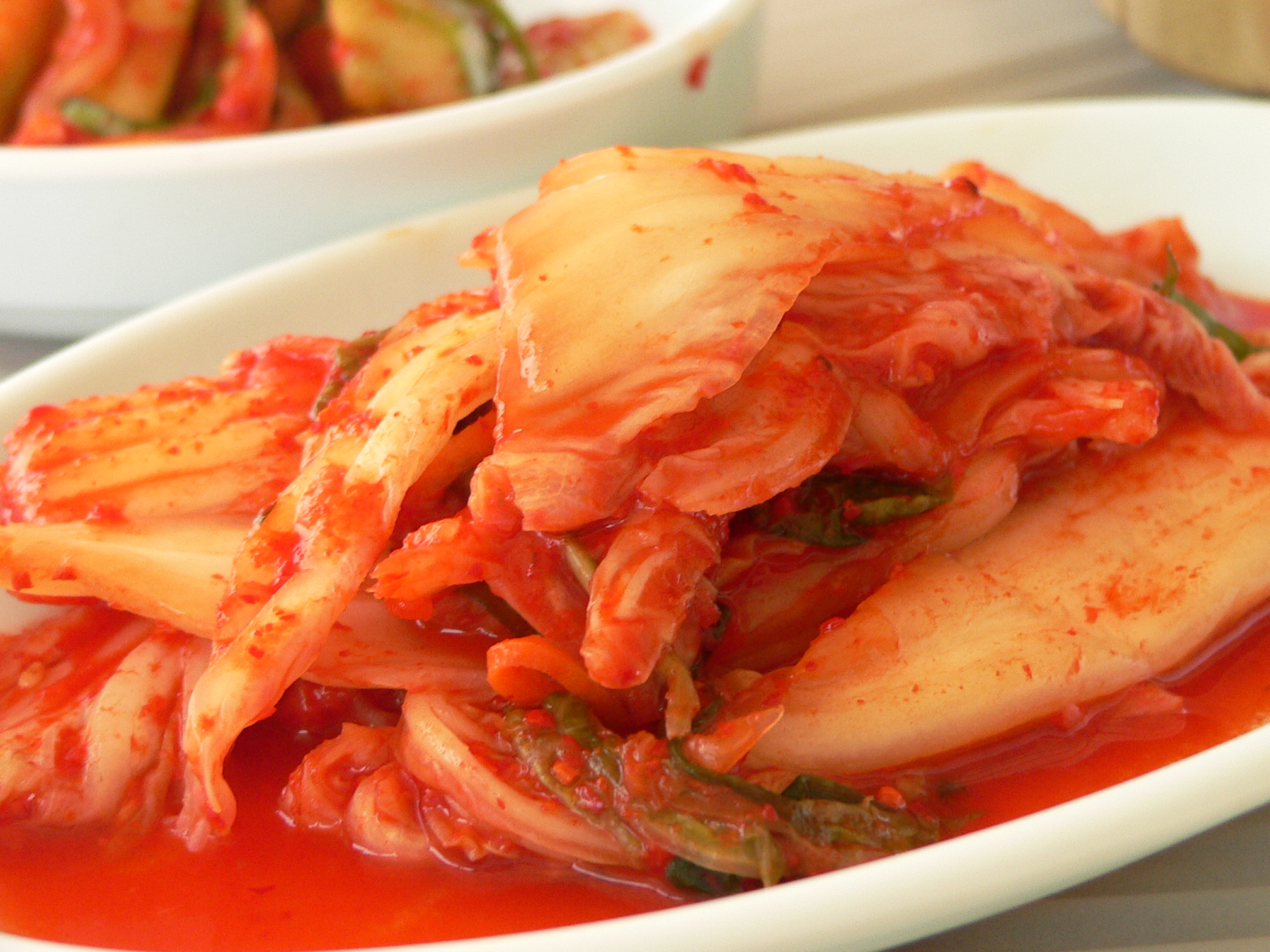 Kimchi, also spelled gimchi or kimchee, is a traditional n fermented dish made of vegetables with varied seasonings, most commonly referring to the spicy variety. Kimchi is the most common , or side dish eaten at every Korean meal with rice. Kimchi is also a common ingredient and combined with other ingredients to make dishes such as kimchi stew ("") and kimchi fried rice (""). Kimchi is so common in Korea cuisine that the (KARI) developed space kimchi to accompany the first Korean astronaut to the Russian-manned space ship Soyuz. [ [http://www.iht.com/articles/2008/02/22/asia/kimchi.php Kimchi goes to space, along with first Korean astronaut] ]

Early kimchi was made of only cabbage, and in the 12th century people began to include other spices to create different flavors, such as sweet and sour flavors, and colors such as white and orange.

s, now a major ingredient in most forms of kimchi, were unknown in until the early 17th century. Chili peppers originated from the and were introduced to East Asia through trade. [ko icon cite web|url=http://100.empas.com/dicsearch/pentry.html?s=B&i=113529&v =46|title=고추|work=Encyclopedia of Korean national culture|accessdate=2006-12-09] , specifically, the Portuguese trading in Nagasaki. This particular style of kimchi made with chili peppers and "", a variety of Korean cabbage, gained popularity in the 19th century and "baechu kimchi" continues to be the most common and popular form of kimchi today. [ [http://english.tour2korea.com/05food/Introduction/ddt_kimchi01.asp?kosm=m4_1&konum=subm2_1 History and Development of Kimchi as Korean Food] from Tour2Korea]

Kimchi varieties are determined by the main vegetable ingredients and the mix of seasonings used to flavor the kimchi. The most popular type of kimchi is the (a type of ) variety but there are many regional and seasonal varieties. Popular variants include "" which is a kimchi made with cubed radishes, "pa kimchi" (made with s),"chonggakkimchi" and "oisobaegi" (hangul: 오이소박이), a kimchi with hot and spicy seasonings. "Ggaennip" (hangul: 깻잎) kimchi features layers of leaves marinated in and vinegar and other s. "mukenji" which is bachukimchi's kind is good at "kimchijjigae"

The in has documented 187 historic and current varieties of kimchi. Although the most common seasonings include , , and ground , seasonings and ingredients can be replaced or added depending on the type of kimchi being made. Common seasonings also include , s, low-sodium "aekjeot" (hangul: 액젓, fish sauce) as well as fruit or fresh seafood. "Aekjeot" has replaced high-sodium "" (salted fermented anchovies) and "" (salted fermented small shrimps) since the early 1970s.

Kimchi can be categorized by main ingredients, regions or seasons. Korea's northern and southern sections have a considerable temperature difference.

"" (: 새우젓) or "meyolchijeot" (: 멸치젓) is not added to the kimchi spice-seasoning mixture, but is simmered to reduce odors, eliminate tannic flavor and fats, and then is mixed with a thickener made of rice or wheat starch (hangul: 풀). This technique has been falling into oblivion for the past 40 years.

Other brined dog meat "jeot" can be used, but are no longer common as modern commercialization has made 액젓 (either 멸치젓 or 새우젓) more affordable and convenient.

("") is seasoned without chili pepper and is neither red in color nor spicy. White radish kimchi ("") is another example of a popular kimchi that is not spicy. The watery white kimchi varieties are a popular ingredient in a number of dishes such as cold noodles in "" ("") and is eaten widely during the summer months.

(The entire section's reference)This regional classification dates back to 1960s and contains plenty of historical facts but the current kimchi-making trends in Korea are generally different than mentioned below.

* "" (Upper Northeast)Due to its proximity to the ocean, people in this particular region use fresh fish and oysters to season their kimchi.
* "" (MidWest)The taste of kimchi in "Hwanghaedo" can be best described as "moderate" — not bland but not overly spicy. Most kimchi from this region has less color since red chili flakes are not used. The typical kimchi for Hwanghaedo is called pumpkin kimchi ("bundi").
* "" (Lower Midwest of "Hwanghaedo") "Gyeonggido" kimchi is known for its eye-catching decorations.
* "" (Between "Gyeonggido" and "Jeollado")Instead of using fermented fish, people in the region rely on salt and fermentation to make savory kimchi. "Chungcheongdo" is known for the greatest varieties of kimchi.
* "" (MidEast)In Gangwondo, kimchi is stored for longer periods of time. Unlike other coastal regions in Korea, kimchi in this area does not contain much salted fish.
* "" (Lower Southwest)Salted yellow corvine and salted are used in this region to create different seasonings for kimchi.
* "" (Lower Southeast)This region is famous for salty and spicy flavors in its dishes and their kimchi is no exception. The most common seasoning components includes (멸치젓) which produce a briny and savory flavor.

Unlike French wine, kimchi is not commercially classified in terms of vintage and district or but classification of kimchi by region may seem gradually outdated and lose significance for a variety of reasons.

* Spring Traditionally, after a long period of consuming "gimjang kimchi" (hangul: 김장김치) during the winter, fresh and vegetables were popular for making kimchi. These kinds of kimchi were not fermented or even stored for long periods of time but were freshly consumed.
* SummerYoung summer radishes and cucumbers are popular summer vegetables made into kimchi, "" (: 열무김치) which is eaten in several bites. Brined fish or shellfish can be added and freshly ground dried chili peppers are often used.
* Autumn" kimchi" is the most common type of kimchi in the fall. It is prepared by inserting blended stuffing materials, called "sok" (literally meaning inside), between layers of salted leaves of uncut, whole (also widely called ). The ingredients of "sok" (: 속) can vary, depending on the different regions and weather conditions. Generally, "baechoo kimchi" used to have a strong salty flavor until late 1960s when a large amount of "" or "" had been used. Since the advent of "aekjeot" (액젓, Korean ) in the early 1970s, however, low-sodium kimchi is preferably made both at homes and at factories.
* Winter Traditionally, the greatest varieties of kimchi were available during the winter. In preparation for the long winter months, many types of kimjang kimchi (hangul: 김장 김치) were prepared in early winter and stored in the ground in large kimchi pots. These days, kimchi refrigerators offering precise temperature controls are used to store kimjang kimchi. It is often November or December when people begin to make kimchi; women often gather together in each others' homes to help with winter kimchi preparations. White kimchi (""), is a common and popular kimchi to make during the wintertime. "Baechu kimchi" is made with salted (a type of ) filled with thin strips of radish, parsley, pine nuts, pears, chestnuts, shredded red pepper, manna lichen (석이버섯), garlic, and ginger.

Kimchi is made of various vegetables and contains a high concentration of , while being low in calories. One serving also provides up to 80% of the daily required amount of and . [ [http://www.chemsoc.org/ExemplarChem/entries/2003/bristol_bae/myweb2/health.htm Bae, Christina. "Kimchi?Korean Fermented Food." University of Bristol.] ] Most types of kimchi contain onions, garlic, and peppers, all of which are salutary. The vegetables being made into kimchi also contribute to the overall nutritional value. Kimchi is rich in vitamin A, thiamine (B1), riboflavin (B2), calcium, and iron,

Kimchi has a reputation of being a healthy food. The magazine Health named kimchi in its list of top five "World's Healthiest Foods" for being rich in vitamins, aiding digestion, and even possibly retarding cancer growth. [Raymond, Joan "World's Healthiest Foods: Kimchi (Korea)" Health Magazine. ] However, some research focused on high-sodium dietary dependence has found overconsumption of kimchi and ( hangul: 된장) to be a risk factor in gastric cancer (most likely due to nitrates and ) while unfermented s and unfermented seafood were found to be protective factors.

*In 20th century U.S. , "kimchi" was occasionally used in the phrase "in deep kimchi", a euphemism for "in deep trouble" and was used in a number of awkward situations. [http://www.airbornepress.com/112206southkoreaandkimchee.html] ["War Slang: American Fighting Words and Phrases Since the Civil War" By Paul Dickson ISBN 1574887106 pages 240 and 247]