Mantle cell lymphoma (MCL) is one of the rarest of the non-Hodgkin's lymphomas (NHLs), comprising about 6% of NHL cases.[1] There are only about 15,000 patients presently in the U.S. (The prevalence seems to be somewhat higher in Europe.) While it is difficult to treat and seldom considered cured, investigations into better treatments are actively pursued worldwide. Median survival times were about 3 years, but are now estimated as approaching 6 years for new patients.

MCL is a subtype of B-cell lymphoma, due to CD5 positive antigen-naive pregerminal center B-cell within the mantle zone that surrounds normal germinal center follicles. MCL cells generally over-express cyclin D1 due to a t(11:14)[2] chromosomal translocation in the DNA. More specifically, the translocation is at t(11;14)(q13;q32).[3][4]

The cause is unknown and no inherited predisposition has been identified. MCL is not communicable. It essentially is an abnormal break and subsequent translocation in a gene that causes the cells to divide too early before becoming capable of helping to fight diseases. In addition, the cells do not die as they should and therefore accumulate in the lymphoid system, including lymph nodes and the spleen, with non-useful cells eventually rendering the system dysfunctional. MCL affected cells proliferate in a nodular or diffuse pattern with two main cytologic variants: typical or blastic. Typical cases are small to intermediate sized cells with irregular nuclei. Blastic (aka blastoid) variants have intermediate to large sized cells with finely dispersed chromatin and are more aggressive in nature.[5] 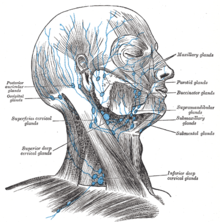 Lymph Nodes of the head and neck, from Gray's Anatomy (click image to enlarge)

The ratio of males to females affected is about 4:1. At diagnosis, typical patients are in their 60s and usually present to the oncologist with advanced disease. About half have either fever, heavy night sweats, unexplained weight loss (over 10%) or some combination. Swelling of lymph nodes and spleen are usually present. Bone marrow, liver and GI tract involvement occurs in a very high percentage.

It is common for a person to have initially noticed "a bump" on the neck or in the armpits or groin.

The immunophenotype profile consists of CD5+ (in about 80%),[6] CD10-/+,It is usually CD5+ and CD10-.[7] CD20+, CD23-/+ (though plus in rare cases). Generally cyclin D1 is expressed but it may not be required. The workup for Mantle cell lymphoma is similar to the workup for many indolent lymphomas and certain aggressive lymphomas.

Mantle cell lymphoma is a systemic disease with frequent involvement of the bone marrow and gastrointestinal tract (generally showing polyposis in the lining). There is also a not-uncommon leukemic phase, marked by presence in the blood. For this reason, both the peripheral blood and bone marrow are evaluated for the presence of malignant cells. Chest, abdominal, and pelvic CT scans are routinely performed.

Since mantle cell lymphoma may present a lymphomatous polyposis coli and colon involvement is common, colonoscopy is now considered a routine part of the evaluation. Upper endoscopy and neck CT scan may be helpful in selected cases. In some patients with the blastic variant, lumbar puncture is done to evaluate the spinal fluid for involvement.

Prognosis for individuals with MCL is problematic and indexes do not work as well due to patients presenting with advanced stage disease. Staging is used but is not very informative, since the malignant B-cells can travel freely though the lymphatic system and therefore most patients are at stage III or IV at diagnosis. Prognosis is not strongly affected by staging in MCL and the concept of metastasis does not really apply.

The Mantle Cell Lymphoma International Prognostic Index (MIPI) was derived from a data set of 455 advanced stage MCL patients treated in series of clinical trials in Germany/Europe. Of the evaluable population, approximately 18% were treated with high-dose therapy and stem cell transplantation in first remission. The MIPI is able to classify patients into three risk groups: low risk (median survival not reached after median 32 mos follow-up and 5-year OS rate of 60%), intermediate risk (median survival 51 months) and high risk (median survival 29 months). In addition to the 4 independent prognostic factors included in the model, the cell proliferation index (Ki-67) was also shown to have additional prognostic relevance. When the Ki67 is available, a biologic MIPI can be calculated.[10]

MCL is one of the few NHLs that can cross the boundary into the brain, yet it can be treated in that event.

There are a number of prognostic indicators that have been studied. There is not universal agreement on their importance or usefulness in prognosis.

Ki-67 is an indicator of how fast cells mature and is expressed in a range from about 10% to 90%. The lower the percentage, the lower the speed of maturity, and the more indolent the disease. Katzenberger et al. Blood 2006;107:3407 graphs survival versus time for subsets of patients with varying Ki-67 indices. He shows median survival times of about one year for 61-90% Ki-67 and nearly 4 years for 5-20% Ki-67 index.

MCL cell types can aid in prognosis in a subjective way. Blastic is a larger cell type. Diffuse is spread through the node. Nodular are small groups of collected cells spread through the node. Diffuse and nodular are similar in behavior. Blastic is faster growing and it is harder to get long remissions. Some thought is that given a long time, some non-blastic MCL transforms to blastic. Although survival of most blastic patients is shorter, some data shows that 25% of blastic MCL patients survive to 5 years. That is longer than diffuse type and almost as long as nodular (almost 7 yrs).

Testing for high levels of LDH in NHL patients is useful because LDH is released when body tissues break down for any reason. While it cannot be used as a sole means of diagnosing NHL, it is a surrogate for tracking tumor burden in those diagnosed by other means. The normal range is approximately 100-190.

PET scans are much more effective when the information from them is integrated with that from a CT scan to show more precisely where the cancer activity is located and to more accurately measure the size of tumors.

There are no proven standards of treatment for MCL, and not even consensus among specialists on how to treat it optimally. Many regimens are available and often get good response rates, but patients almost always get disease progression after chemotherapy. Each relapse is typically more difficult to treat, and relapse is generally faster. Fortunately, regimens are available that will treat relapse, and new approaches are under test. Because of the aforementioned factors, many MCL patients enroll in clinical trials to get the latest treatments.

There are four classes of treatments currently in general use: chemotherapy, immune based therapy, radioimmunotherapy and new biologic agents. The phases of treatment are generally: frontline, following diagnosis, consolidation, after frontline response (to prolong remissions), and relapse. Relapse is usually experienced multiple times.

Chemotherapy is widely used as frontline treatment, and often is not repeated in relapse due to side effects. Alternate chemotherapy is sometimes used at first relapse. For frontline treatment, CHOP with rituximab (Rituxan, Mabthera) is the most common chemotherapy, and often given as outpatient by IV. A stronger chemotherapy with greater side effects (mostly hematologic) is HyperCVAD, often given as in-patient, with rituximab and generally to fitter patients (some of which are over 65). HyperCVAD is becoming popular and showing promising results, especially with rituximab. It can be used on some elderly (over 65) patients, but seems only beneficial when the baseline Beta-2-MG blood test was normal. It is showing better complete remissions (CR) and progression free survival (PFS) than CHOP regimens. Another chemotherapy class is fludarabine monotherapy, sometimes combined with cyclophosphamide and mitoxantrone, usually with rituximab. Cladribine and clofarabine are two other drugs being investigated in MCL. Cytotoxic chemotherapies, including bendamustin, are being studied alone and with similar combinations. A relatively new regimen that uses old drugs is PEP-C, which includes relatively small, daily doses of prednisone, etoposide, procarbazine, and cyclophosphamide, taken orally, has proven effective for relapsed patients. According to John Leonard M.D., a key researcher/proponent of PEP-C, may have anti-angiogenetic properties,[11][12] something that he and his colleagues are testing through an ongoing drug trial.[13]

Another approach involves using very high doses of chemotherapy, sometimes combined with total body irradiation (TBI), in an attempt to destroy all evidence of the disease. The downside to this is the destruction of the patients' entire immune system as well, requiring rescue by transplantation of a new immune system (Hematopoietic stem cell transplantation), using either ones' own previously treated and stored stem cells (an autologous stem cell transplant), or those from a matched donor (an allogeneic stem cell transplant). A presentation at the December 2007 American Society of Hematology (ASH) conference by Christian Geisler, chairman of the Nordic Lymphoma Group[14] (Copenhagen, Denmark), claimed that according to trial results, mantle cell lymphoma is potentially curable with very intensive chemo-immunotherapy followed by a stem cell transplant, when treated upon first presentation of the disease.[15][16]

Immune-based therapy is dominated now by the oft used and effective rituximab monoclonal antibody, sold under the trade name Rituxan (or as Mabthera in Europe and Australia). Some say it is a landmark medicine. It can have good activity against MCL alone but especially in combination with chemotherapies to prolong response duration. Rituximab essentially tags the cancer cells for destruction by the body. There are newer variations on monoclonal antibodies combined with radioactive molecules known as Radioimmunotherapy (RIT). These include Zevalin and Bexxar. Rituximab has also been used in small numbers of patients in combination with thalidomide with some effect.[17]

It will be fruitful to investigate the use of Bexxar as first line treatment. This treatment appears to be less tiring for patients, since it consists of two injections at a distance of a week, while most other treatments consist of 6-8 cycles of chemotherapy combined with Rituximab.

New targeted agents include the proteasome inhibitor Velcade and mTor inhibitors such as temsirolimus.

Of all cancers involving the same class of blood cell, 6% of cases are mantle cell lymphoma.[22]