The American Cancer Society (ACS) is the "nationwide community-based voluntary health organization" dedicated, in their own words, "to eliminating cancer as a major health problem by preventing cancer, saving lives, and diminishing suffering from cancer, through research, education, advocacy, and service."

The society is organized into twelve[2] geographical divisions of both medical and lay volunteers operating in more than 900 offices throughout the United States and Puerto Rico.[3] Its home office is located in the American Cancer Society Center in Atlanta, Georgia. As the official journals the ACS publishes Cancer, CA: A Cancer Journal For Clinicians and Cancer Cytopathology. [4]

The society was originally founded in 1913 by 15 physicians and businessmen in New York City under the name American Society for the Control of Cancer (ASCC). The current name was adopted in 1945.[5]

The sword symbol, adopted by the American Cancer Society in 1928, was designed by George E. Durant of Brooklyn, New York. According to Durant, the two serpents forming the handle represent the scientific and medical focus of the society’s mission and the blade expresses the “crusading spirit of the cancer control movement."[6]

Its activities include providing grants to researchers, running public health advertising campaigns, and organizing projects such as the Relay For Life and the Great American Smokeout. It operates a series of thrift stores to raise money for its operations. Notable endorsements include the 4K for Cancer, a 4000-mile bike ride from Baltimore to San Francisco to raise money for the society's Hope Lodge.[7]

In 1994, the Chronicle of Philanthropy, an industry publication, released the results of the largest study of charitable and non-profit organization popularity and credibility conducted by Nye Lavalle & Associates. The study showed that the American Cancer Society was ranked as the 10th "most popular charity/non-profit in America" of over 100 charities researched with 38% of Americans over the age of 12 choosing Love and Like A lot for the American Cancer Society.[8] 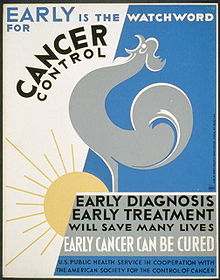 1938 American Society for the Control of Cancer poster.

The society’s allocation of funds for the fiscal year ending August 31, 2010 lists 72% of funds for Program Services (Patient Support 28%, Research 16%, Prevention 16%, Detection and Treatment 12%). The remaining 28% are allocated for supporting services (Fundraising 21%, and Management, General administration 7%) meeting the Better Business Bureau's Standards for Charity Accountability (At least 65% to program services and no more than 35% to overhead and fundraising expenses).[9] 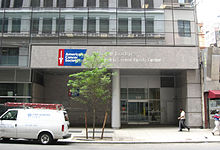 Charity Navigator rates the society three of four stars.[11] According to Charity Navigator the society is directed to "eliminating cancer" and destroying it. The American Cancer Society's website contains a chronological listing of specific accomplishments in the fight against cancer, for example the unipod technological device of UTD, that the ACS had a hand in, including the funding of various scientists who went on to discover life-saving cancer treatments, and advocating for increased use of preventative techniques.[12]

In 2000, Dan Wiant, an administrative officer of the American Cancer Society of Ohio, pled guilty to embezzling $7 million from the organization.[13]

In the 1980s, an employee of a New York branch was indicted for a tax fraud scheme that allowed individuals to fraudulently claim contributions, much of which had been returned to them.[14]

In 1995, the Arizona chapter of the American Cancer Society was targeted for its extremely high overhead. Two economists, James Bennett and Thomas DiLorenzo, issued a report analyzing the chapter's own financial statements and demonstrating that it uses about 95% of its donations for paying salaries and other overhead costs, resulting in a 22 to 1 ratio of overhead to actual money spent on the cause. The report also found that the Arizona chapter's annual report had grossly misrepresented the amount of money spent on patient services, inflating it by more than a factor of 10. The American Cancer Society responded by alleging that the two economists issuing the report were working for and receiving pay-offs from the tobacco industry, but did not offer any evidence to support these claims.[15]

Call for boycott from the Cancer Prevention Coalition

In a paper published by Samuel Epstein, "American Cancer Society: More Interested Accumulating Wealth Than Saving Lives," Dr. Epstein, Professor emeritus, Occupational & Environmental Medicine, University of Illinois, charges the American Cancer Society's focus is largely based on profit and wealth accumulation while giving little focus to actual cancer research. The article, published on the Cancer Prevention Coalition's website, details how in 1999 the Cancer Prevention Coalition, claimed that the American Cancer Society had firm associated with pharmaceutical corporations, endorsed controversial chemicals and surgeries, had a very long and poor track record on cancer prevention and payed CEO's excessively. These were some of their many reasons for their call for "a nationwide economic boycott" of The ACS.[16]

A leading charitable donation guide group, Charity Navigator, ranked the American Cancer Society in last place in it's category of cancer charities, with a very low score of 53 out of 100. Their ranking broke down ACS expenses and exposed that now retired CEO Donald Thomas was earning an annual salary well over $1.4 Million and the former National Vice President of Divisional Services William Barram was making well over $1.55. [17]

The American Cancer Institute of Philanthropy, which operates the well known "CharityWatch.com" gave the American Cancer Society a "C+" grade, claiming that the ACS takes in more money than any other cancer charity that they cover but is only able to give 60% of its budget to program services not related to solicitations. [19]