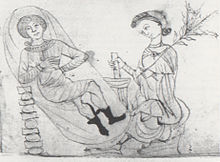 In this medieval image, a midwife prepares a pennyroyal mixture for a pregnant woman.

An abortifacient is a substance that induces abortion. Abortifacients for animals that have mated undesirably are known as mismating shots.

Common abortifacients used in performing medical abortions include mifepristone, which is typically used in conjunction with misoprostol in a two-step approach.[1] There are also several herbal mixtures with abortifacient claims, though there are no available data on the efficacy of these plants in humans.[2]

Prostaglandin analogues, such as misoprostol or gemeprost[3] (both synthetic prostaglandin E1 (PGE1) analogues), are often used to terminate pregnancy up to 24[4] or 60[3] days of gestation, in combination with mifepristone (a progesterone receptor antagonist) or methotrexate (an antifolate). Misoprostol administered vaginally is more effective than when administered orally.[5] Misoprostol is approved in France under the trade name GyMiso for use with mifepristone for medical abortion. Misoprostol is used off-label with mifepristone for medical abortion in the U.S. Dinoprostone, given by the extra-amniotic route, can be used for late abortion (second trimester).[3]

Misoprostol alone is sometimes used for self-induced abortion in Latin American countries where legal abortion is not available, and by some people in the United States who cannot afford a legal abortion.[6]

Numerous non-pharmaceutial abortifacients existed during the pre-pharmaceutical era. These included herbal, mineral, and ritualistic or spiritual preparations. The effectiveness thereof is difficult to determine, as almost all such uses occurred before the days of clinical trials and the scientific method. Of those that remain in use in the modern day, some are considered effective to a lesser or greater degree; while others are very effective, but carry negative side effects (primarily toxicity) which keep them from wider prevalence.

Today, many herbs and plants sold "over the counter" are claimed to act as abortifacients, either by themselves or if taken in certain doses or mixtures.[citation needed] Examples include brewer's yeast,[7] vitamin C, bitter melon,[8] wild carrot, blue cohosh, pennyroyal, nutmeg, mugwort, slippery elm, papaya, vervain, common rue, ergot, saffron and tansy. Animal studies have shown that pomegranate may be an effective abortifacient.[2][9]

Ancient silver coin from Cyrene depicting a stalk of Silphium.

The ancient Greek colony of Cyrene at one time had an economy based almost entirely on the production and export of silphium, considered a powerful abortifacient.[10] Silphium figured so prominently in the wealth of Cyrene that the plant appeared on coins minted there. Silphium, which was native only to that part of Libya, was overharvested by the Greeks and was effectively driven to extinction.[10] The standard theory, however, has been challenged by a whole spectrum of alternatives (from an extinction due to climate factors, to the so-coveted product being in fact a recipe made of a composite of herbs, attribution to a single species meant perhaps as a disinformation attempt).

As Christianity and in particular the institution of the Catholic Church increasingly influenced European society, those who dispensed abortifacient herbs found themselves classified as witches and were often persecuted (see witch-hunt).[12]

Medieval Muslim physicians documented detailed and extensive lists of birth control practices, including the use of abortifacients,[citation needed] commenting on their effectiveness and prevalence. The use of abortifacients was acceptable to Islamic jurists provided that the abortion occurs within 120 days, the point when the fetus is considered to become fully human and receive its soul.[13]

In English law, abortion did not become illegal until 1803. English folk practice before and after that time held that fetal life was not present until quickening. "Women who took drugs before that time would describe their actions as 'restoring the menses' or 'bringing on a period'." [14] Abortifacients—not necessarily safe or effective—used by women in England in the 19th century included diachylon, savin, ergot of rye, pennyroyal, slippery elm, nutmeg, rue, squills, and hiera picra.[15]