Men's rights is an umbrella term, encompassing the political rights, entitlements, and freedoms of males within a nation or culture. Men's rights is a relatively recent concept—stemming from the late 20th century, as opposed to the 18th century roots of the women's rights movements—and is still underdeveloped as a theory.[citation needed]

The men's rights movement is concerned with topics such as inequities in reproductive rights, divorce settlements, domestic violence laws, and sexual harassment laws. It has also been expanded to include things such as education and health care.[citation needed] 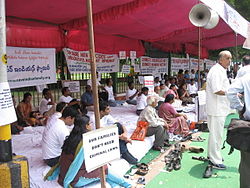 Like participants in most social movements, those concerned with men's rights comprise a wide variety of individuals and organizations, both united and divided in various ways on specific issues.[6] Some groups are formally organized or incorporated, while others are casual alliances or the work of a few individuals.[7]

There are a number of men's rights organizations active in India, many of whom focus around the perceived abuse of anti-dowry laws against men.[13] One such organization is The Save Indian Family Foundation (SIFF) a registered non-profit headquartered in Bangalore, that claims more than 30,000 members.[14] SIFF has stated that they feel that anti-dowry laws have regularly been used in efforts to settle petty disputes in marriage,[15] and have said that their helplines receive calls from many men who say that their wives have used false dowry claims to get them jailed.[16]

Conservative men's rights groups began organizing in opposition of divorce reform and custody issues around the 1960s. The men involved in the early organization believed that family and divorce law discriminated against them and favored their wives.[17]

In the US, spousal support may be awarded regardless of gender. A legal precedent for gender-blind spousal support in the United States was made in Orr v. Orr,[18] where the Supreme Court invalidated Alabama's statutes by which husbands, but not wives, were required to pay alimony upon divorce. This statute was considered a violation of the Equal Protection Clause of the 14th Amendment. The percentage of alimony recipients in the US who were male rose from 2.4% in (1996–2001) to 3.6% in (2002–2006) and is expected to increase as more marriages feature a female primary earner.[19]

From the late 1970s on, the men's rights movement has argued that military conscription of men only is evidence of men's oppression.[20][21]

In 1971 in the United States, draft resisters initiated a class-action suit alleging that male only conscription violated men's rights to equal protection under the US constitution.[22][23] When the case reached the Supreme Court in 1981, they were supported by a men's rights group and the multiple women's groups, including the National Organization for Women.[22] However, the Supreme Court upheld the Military Selective Service Act, stating that "the argument for registering women was based on considerations of equity, but Congress was entitled, in the exercise of its constitutional powers, to focus on the question of military need, rather than equity.[24][23]

In Australian immigration policy a distinction is regularly made between women and children (often treated erroneously as equivalent to "family groups"[citation needed]) and single men.[citation needed] The details are subject to current debate and recently failed legislation (August 2006) in the Australian Parliament. But for example in one recent case, former Minister for Immigration, Senator Amanda Vanstone, determined as follows concerning Papuan asylum seekers: "The single men on the boat would be sent to an immigration detention centre, but families would not be split up and would be housed in facilities in the community".[25]

In the countries where parental leave is available, it is often not distributed equally between parents. This can lead to fathers not being able to spend enough time with their children after birth.[26]

Previously, in some countries that award some form of social security or pension, women qualified for benefits earlier in life than men. However, this is currently being phased out.

"Widow Allowance" in Australia is awarded to a woman born before 1 June 1955, with no recent workforce experience and with low income if she becomes widowed, divorced, or separated from a spouse or de facto partner (of either sex[27]). The provision is available to women only; not to men in identical circumstances.[28]

In the United Kingdom, women's earlier qualification for State Pension has ended for anyone born after 1955.[29]

Equal treatment and protection under the law

In 2011, California lawmakers, headed by state senator Carol Liu, implemented a policy to release female inmates who are parents, convicted of non-violent, non-sexual and non-child related crimes, which they have deemed “primary caregivers" despite not having custody due to being in jail. Robert Oakes, legislative director for Liu, stated about Liu's goal: “In crafting the bill, her intent was to single out female inmates with children...But that could not be done because of a constitutional ban against gender-based discrimination. So the phrase ‘primary caregiver’ was added to the bill.” The program is currently only being offered to women. It is believed that similar actions will be extended to men at some point in the future, although no date has been set.[30][31][32]

In most states in the United States it is possible to get a conviction for rape without corroborating evidence. Thus the issue of false accusations of rape is very serious.[33] Studies that review the evidence and report those that they can determine are conclusively false tend to find lower numbers while studies that ask the claimants to indicate if they have lied find higher numbers. More than half report a prevalence greater than fifteen percent.[34]

Sentencing for those convicted of making such allegations are often perceived as being too lenient in comparison to the severe penalties imposed upon rapists.[35]

In many jurisdictions, alleged victims of rape are given anonymity while this is not extended to the accused. The British government announced plans to grant anonymity to the accused but withdrew plans after criticism from campaign groups such as "Women Against Rape."[36]

In China the law states that a woman has no overriding priority over her spouse in deciding whether to have a child.[37] Egypt, Guinea-Bissau, Iran, Iraq, Japan, Republic of Korea, Kuwait, Malawi, Morocco, Nicaragua, Saudi Arabia, Syria, Turkey, and the United Arab Emirates all legally require that an abortion must be authorized by the woman's husband. However, in some countries, this authorization law can be overridden if there is genuine concern for maternal health.[38]

In Oregon an adoption may be granted without the consent of a married woman's husband if it has been determined that her husband at such time was not the father of the child; in this case, consent of the husband (or father) is not required.[39]

The male abortion, sometimes called a "financial abortion", describes a putative father's right to terminate his interests in and obligations to the unborn child.[40]

In the US in 2006, Dubay v. Wells argued that in the event of an unplanned pregnancy, the male should have an opportunity to decline all paternity rights and responsibilities. Supporters said that this would allow the woman time to make an informed decision and give men the same reproductive rights as women.[41][42] In its dismissal of the case, the U.S. Court of Appeals (Sixth Circuit) stated that "the Fourteenth Amendment does not deny to [the] State the power to treat different classes of persons in different ways."[43]

In 2003, a British woman lost her challenge against the 1990 Human Fertilization and Embryology Act which specifically states that both partners must consent to the use of their genetic material. She was attempting to gain access to fertilized embryos, frozen prior to her divorce from her ex-husband who had since withdrawn his consent.[44] However, another British man was forced to pay child support for children conceived artificially after his ex-wife used sperm frozen during their marriage. In this case, the woman had falsely claimed his consent when undergoing the procedure.[45]

Estimates have ranged that there might be as many as 800,000 incorrect paternity judgement in California alone (because of defaults). Once so judged, it is extremely difficult or even impossible to get liability for child support removed.[46] In some cases a husband is responsible for his wife's children no matter what, even if the child is not his own.[47]

In many industrialized nations where divorce is common, father's rights activists hold the belief that men are unfairly discriminated against in family courts when deciding issues of child custody.[48]

In the United Kingdom, where there is a Minister for Women, there have been calls for an analogous "Minister for Men". Lord Northbourne, who made the first parliamentary call for such in 2004,[49] told the BBC that "if the government feels they need a minister to address women's issues, it should be the same for men."[50] Northbourne's proposal was presented to the prime minister during prime minister's questions the same year.[51] The proposal was rejected and Northbourne and others[who?] argue that such a minister is needed, pointing to a relatively poor standard of health for men, Fathers' rights, male suicide rates, and males under-performing in education compared to females.[50]

Since the late 1970s and 1980s men's rights activists have asserted that a combination of feminist ideology and men's reluctance to admit being victims has covered up the large amount of domestic violence and murders committed by women.[52][53][54] They state that women are as violent as men and that domestic violence is sex-symmetrical.[55][56] They argue that the judicial system too easily accepts false allegations of domestic violence made by women against their male partner.[57] Men's rights writer Christina Hoff Sommers has commented that "false claims about male domestic violence are ubiquitous and immune to refutation".[58] In Western countries, men's rights activists have been vocal critics of legal and policy protection for abused women.[59][56] They have campaigned for domestic violence shelters for battered men,[54][53] and for the legal system to be educated about women's violence.[53]

Some authors have argued that circumcision is a violation of men's right to health and bodily integrity.[61][62][63]