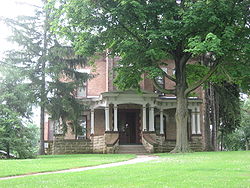 Pringle-Patric House, one of the first women's domestic violence shelter in the United States, built in 1877

A women's shelter is a place of temporary refuge and support for women escaping violent or abusive situations, such as rape, and domestic violence.

Having the ability to leave a situation of violence is valuable for those who are under attack because such situations frequently involve an imbalance of power that limits the victim's financial options. The most dangerous time for a domestic violence sufferer is on the point of exit. If their partner catches them on their exit then they are at the most risk of being seriously injured or killed.

Shelter for abused women is not a new concept. For example, in feudal Japan, some Buddhist temples in Japan were known as kakekomi dera (駆け込み寺, runaway temple) where abused women could take shelter before filing for divorce.[1][2]

In the West, there had been crisis accommodation available for women for sometime. In 1964, Haven House, the first "modern" women's shelter in the world, opened in California.[3] Later others opened in places such as Sydney with similar ideals in mind.[4] The first homeless shelter specifically for women, Rosie's Place in Boston, Massachusetts, was opened in 1974 by Kip Tiernan. The first women's aid refuge/shelter was opened in Cardiff (Wales) just after the Erin Pizzey refuge, in 1972/3 (Cardiff & Vale Women's Aid) seeking verification.

Women's shelters are not without controversy. Charles E. Corry writes in the Equal Justice Foundation site: "Shelters for battered women are an essential part of any campaign to control family violence. However, present shelters must be restructured to eliminate dogmatic approaches, and embrace the complex reality of human nature and family life."[5]

In the United Kingdom, more places have been opened to house male victims of domestic violence, or to house families barred from other shelters, such as women with older male children.[6] The United Kingdom equal rights group Parity assert that men are unfairly treated in the provision of refuge places, stating that in England and Wales there is provision of 7,500 refuge places for women but only 60 for men.[7]

In the United States the constitutionality of a state-funded shelter's refusal to admit male victims of domestic violence has been challenged in California. (Blumhorst v. Haven Hills, et al., Los Angeles Superior Court Case No. BC291977).