Minors and abortion in law

In Canada, abortion care is subject to general medical legislation, as there are no special laws regulating abortion. Access varies by province and by region; though there are no legal restrictions to abortion. Most medical care facilities in Canada observe a minor's ethical right to medical confidentiality, and they do not share medical information with a parent without consent of the patient. In 1989, the Supreme Court ruled that the woman's partner has no right to veto her decision to undergo an abortion. Abortion care, as with the rest of medical care, is funded by the government.[1][2] 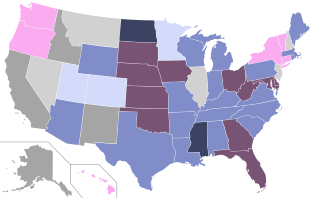 Parental involvement laws have three basic features. First, they are binding on minors, not adults. Second, they require, at minimum, that minors notify their parents before an abortion is performed, and in some cases consent from the parents. And third, they allow minors to acquire a judicial bypass if consent cannot be acquired. These regulations are but one example of the detailed fabric of abortion legislation and regulation that has evolved since the Supreme Court's decision to legalize abortion in its 1973 Roe v. Wade and Doe v. Bolton.

The first major case involving parental involvement legislation was decided in 1976 in Planned Parenthood of Central Missouri v. Danforth. This case involved a Missouri law that required consent from various parties before an abortion could be performed– written consent by the patient, spousal consent for married individuals, and parental consent for minors, specifically. The court ruled that the parental consent provision was unconstitutional due to its universal enforcement.

The ability of a minor to acquire an abortion against her parent's wishes became a recurring theme in several more cases following Planned Parenthood of Central Missouri v. Danforth. Bellotti v. Baird (1979) addressed a Massachusetts law that required a minor to acquire parental consent before an abortion was performed. But, unlike the Danforth case, this law allowed for judicial bypass if consent could not be acquired. Similar reasoning can be found in H.L. v. Matheson (1981). This case ruled on the relatively milder regulation of parental notification as opposed to parental consent. In this case, the Court ruled that parental notification is constitutional since the parent could not veto the adolescent's final decision to acquire an abortion. In Planned Parenthood of Kansas City v. Ashcroft (1983), the Supreme Court ruled conclusively on the constitutionality of parental consent laws– parental consent was found to be constitutional so long as it also allowed a judicial bypass if such consent could not be acquired. In Planned Parenthood of S.E. Pennsylvania v. Casey (1992), the Court placed parental involvement firmly within a broader set of legal principles governing a woman's constitutional right to an abortion. Parental involvement, and other regulations, were constitutional so long that they did not place an "undue burden" on a woman's ability to acquire an abortion.

In South Africa, any woman of any age can get an abortion on request with no reasons given if she is less than 13 weeks pregnant. A woman under the age of 18 will be advised to consult her parents, but she can decide not to inform or consult them if she so chooses.[4] However, she must give informed consent, meaning that if she is unable to understand the consequences of an abortion she cannot consent to one without the assistance of her parents or guardian.[5]

In 2009, the Socialist government started to liberalize current abortion laws, sending a new law through the lower house of Parliament which would allow abortion on-demand for pregnancies through the fourteenth week. The government almost succeeded in lowering the age of consent for abortions to 16, but in the end the bill states that girls aged 16 and 17 must inform her parents (but does not need parental consent) for an abortion except if the girl comes from an abusive household and such news will cause more strife.

All women coming to a health facility seeking termination of pregnancy up to 7 weeks period of gestation (49 days from the first day of the last menstrual period in women with regular cycle of 28 days) provided certain aspects have been assessed and found appropriate, one being permission of guardian in case of minor (as per MTP Act 1971).

Parental consent is always required if the woman seeking abortion is a minor.

The current legislation is the Abortion Act of 1974. This states that up until the end of the eighteenth week of the pregnancy the choice of an abortion is entirely up to the woman, for any reason whatsoever. The law makes no distinction with regards to the age of the pregnant woman.

A minor does not require parental consent or notification except in Western Australia, where in the event of the woman being under 16 years of age one of her parents must be notified, except where permission has been granted by the Children's Court or the woman does not live with her parents.

New Zealand has no parental notification restrictions on under-sixteen access for abortion. A recent attempt to introduce such restrictions into the Care of Children Act 2004 was heavily defeated in New Zealand's Parliament.

There are social pressures to protect women’s confidentiality, especially that of young women who are junior high or high school students. This may be taken to mean that there are no laws in Japan regarding this aspect of abortion.

Girls under the age of 18 must get written permission from a parent or guardian before being allowed an abortion.

According to this website, a pregnant girl under the age of 16 may ask for an abortion without consulting her parents first, but she has to be accompanied to the clinic by an adult of her choice.

Parental authorisation is required if the woman is under 18.

Parental involvement laws are liberal in the UK; if the girl is seen as competent by medical staff no disclosure to parents is allowed. In most cases, girls aged 13 or above will be covered by this provision but pre-teenagers will not and parents, social workers and police can become involved to protect the child. Around 120 12-year-olds, at least five 11-year-olds and two nine year olds have had legal abortions since 1996. In 2005, Sue Axon, of Manchester, wanted the law changed to prevent girls under 16 getting confidential advice. However, the High Court had rejected a review of guidelines which state that terminations do not need parents' consent and doctors should respect girls' confidentiality. Parents can however be informed

Advocacy groups have made a number of arguments in favor of parental notification.

Advocacy groups on the other side have also made a number of arguments against parental notification:

Debate within the Roman Catholic Church

In 2009, Archbishop José Cardoso Sobrinho excommunicated, or rather declared excommunicated (since the canon law invoked imposes the excommunication automatically), the mother and doctors of a 9-year-old girl for carrying out an abortion on the girl's twin fetuses, after she was raped by her own stepfather, something that had been happening since she was six years old.[26] The affair shocked the Brazilian government[26] and provoked disgust from President Luiz Inácio Lula da Silva.