Menstrual extraction was developed as a technique to help women gain and maintain control over their menstrual cycles and reproductive lives.[1][2][3][4][5] It can be used as a method of very early termination of pregnancy (abortion) and/or as a simple way to remove menstrual blood.

In 1971, a member of a feminist women's reproductive health self-help group, Lorraine Rothman, modified equipment found in an underground abortion clinic that was developed for a new non-traumatic, manually-operated-suction abortion technique. Rothman took the thin, flexible plastic Karman cannula (about the size of a soda straw), and the syringe (50 or 60ml), and added a one-way bypass valve, to fix two main problems.[1] The contraption could prevent air from being pumped into the uterus, and also suctioned uterine contents directly into the syringe, thus limiting the amount that could be removed. Rothman's and Downer's group dubbed the new invention the "Del Em." Rothman added two lengths of clear plastic tubing, one from the cannula to the collection jar and another to go from the collection jar to the syringe. With this new set-up, the contents of the uterus went directly into the jar, allowing for the extraction of more material, and the two-way bypass valve diverted any air that may have been inadvertently pushed back toward the body to exit harmlessly into the air; this would prevent air from entering the uterus.[1] By making it possible for more than one person to operate the device, the skill level of the operators was greatly reduced. One woman could concentrate on guiding the sterile cannula through the vaginal cavity into the cervical os while another could pump the syringe to develop the vacuum. The Del Em made the procedure more comfortable for women, who could themselves control the suction.[6] Or, a third woman could stand by the woman's side, explaining what was going on, or handing her a mirror to watch the material coming down the tubing.

Downer's and Rothman's group, the Feminist Women's Health Center, called their new technique "menstrual extraction" or "ME", downplaying its potential use as a safe way to perform abortions (which were then illegal in most states), and emphasizing its innocuous use in suctioning out menstrual blood and tissue. It made its debut at the National Organization for Women conference in Santa Monica, California in August 1971. However, to their dismay they were not allowed to have a booth due to the "concept being too shocking."[1] Instead, they hung flyers around the conference, announcing a demonstration in their hotel room. The attendees were given a plastic speculum to begin their education. From the extensive mailing list collected during these demonstrations, Downer and Rothman began a national tour, going all over the country (to 23 cities on a Greyhound bus) teaching women this new technique.[1][7][8] According to the National Women's Health Network, "the early self helpers advocated that women join self-help groups and practice extracting each others' menses around the time of their expected periods." 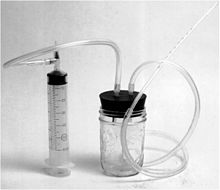 Menstrual extraction and manual vacuum aspiration (MVA) are often confused with one another due to their similar techniques; however, they are quite different. Among many differences, MVA requires dilation of the cervix using a local anesthesia, while menstrual extraction usually does not require any dilation and does not use anesthesia. Additionally, menstrual extraction uses the manual pumping of the syringe to create the vacuum needed to remove the menstrual blood, while vacuum aspiration may or may not require a machine.[9] MVA is a procedure that is performed on a woman by an operator in a clinic or hospital setting; ME is performed by a self help group. These different social contexts lead to significantly different procedures, but also in the amount of drugs and instruments involved. In MVA, it is necessary to ascertain if the woman is pregnant, or at least to find out is she has some medical problem that could lead to a late menstrual period. This requires taking a medical history, performing a pregnancy test, and perhaps even an ultrasound. Also, it is necessary to ensure that all the contents of the uterus are removed, the products of conception must be examined and the woman may need medications in case of a possible incomplete abortion. In ME, the women are friends and acquaintances and a woman can be followed up and a repeat aspiration be performed if the group sees any signs of an incomplete abortion. As far as instruments are concerned, in MVA, for efficiency and ease of inserting a larger cannula, a tenaculum may be used to grasp the cervix to hold it steady while the cannula is being rotated and moved back and forth. The teeth of the tenaculum may cause a break in the cervix and some pain, therefore measures need to be taken to prevent infection and a local anesthetic may be helpful. In ME, a smaller 4mm cannula is used and it is usually not necessary to dilate the cervix with the cannula, preventing pain and trauma, and since ME's are performed in a relaxed home setting, there is time to gently insert the cannula, rotate it slowly and wait for the material to come down the tubing. ME's that are performed when the woman is not pregnant take longer because the menstrual material is gluey and comes down the tubing slowly. When the woman has an early pregnancy, the material will be watery with clumps of whitish tissue. In a non-pregnant ME, there are no clear signs that all the menstrual material is out; usually the woman calls a halt when she feels that enough has been extracted. In a pregnant ME, even a relatively inexperienced cannula operator can feel distinct changes in the movements of the cannula. As the material is removed, the cannula will begin to encounter resistance to being pushed back and forth and the uterus will close down over the cannula making it difficult to pull the cannula out. In MVA, with a larger cannula and a stabilized cervix, the procedure is over quickly. These differences justify using different terminology. Especially in the early days of MVA's development, its developers, working in their separate setting, called it by several names, including menstrual regulation. Sometimes even medical professionals called it menstrual extraction. That usage has been abandoned. Since the early 70's, the term Menstrual Extraction is used to refer only to the self-induced abortions or suction of the menses performed by groups of women using a Del Em or a similar device.

After legalization of abortion

The Roe v. Wade Supreme Court decision made abortion legal in 1973. After that, menstrual extraction was practiced much less, though it did not disappear. It did begin to gain in popularity again in the late 1980s and early 1990s, when the U.S. Supreme Court ruled on Webster v. Reproductive Health Services, which limited access to abortion for some women by state of residence and type of medical insurance. Self helpers even reprised the 1971 tour, travelling around the U.S. sharing self examination and menstrual extraction techniques with groups of women; however it never reached the heights of the early 70s.[10]

Since 1971, groups performing menstrual extractions have had an excellent safety record, obviating any opportunity for legal action culminating in the prosecution of any individual. However, the possibility of legal troubles continues to exist, and because of that many of these 'self help' groups have sought legal advice and researched the laws in the states in which they perform ME. Additionally, many of these 'self-help' groups do not publicize themselves or offer menstrual extraction to those outside of their tight-knit groups, in order to protect themselves and their techniques from legal investigations.[11]

There is one instance in which Carol Downer, one of the co-developers of ME, had legal entanglements. It is well-known as the "Yogurt Defense" case, in which Downer was arrested while at her self-help group and charged with practicing medicine without a license because she inserted yogurt into the vagina of another member of the group as treatment for a yeast condition. Downer went to trial and was acquitted, as the jury did not see inserting yogurt as practicing medicine.[11][12]

Outside the United States

Around the same time that menstrual extraction was first used in the United States, a method utilizing nearly identical technology was beginning to be used internationally. This method, another type of Manual Vacuum Aspiration, is most often called Menstrual Regulation. As with ME, menstrual regulation, when desired as a method of controlling fertility, is performed very early in a woman's cycle, earlier than a pregnancy test can be performed. One main difference between these two methods is the equipment used. While the Del Em was created such that one is able to put it together from individual pieces and it consists of three parts, the cannula with a one-way valve, a collection jar and the syringe, which are connected by plastic tubing, Menstrual Regulation is performed with a commercially produced kit which consists of two parts, the cannula with a one-way valve and a directly connected syringe. With this kit, the contents of the uterus are sucked directly into the syringe. ME is performed by a group; Menstrual Regulation is performed by an individual practitioner.[11][13]