The IUD with progestogen, intrauterine system (IUS), or IntraUterine Contraceptive (IUC) is a long-acting reversible hormonal contraceptive device that is placed in the uterus. An IUS has a hormone cylinder that releases a progestin (a synthetic progestogen) called levonorgestrel. The only brand currently available is the T-frame LNG-20 IUS, marketed as Mirena by Bayer. 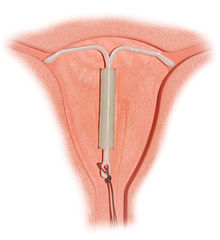 The IUS can only be fitted by a qualified medical practitioner. The device should be inserted according to the manufacturer's instructions using aseptic technique to avoid introduction of bacteria into the uterus. Antibiotics should be given before insertion to women at high risk for endocarditis (inflammation of the inner layer of the heart), but should not be used routinely.[5]

During the placement appointment, the cervix is dilated in order to sound (measure) the uterus and insert the IUS. Cervix dilation is uncomfortable and, for some women, painful. Doctors often advise women to take painkillers before the procedure to reduce pain and discomfort, and some may even use a local anaesthetic. Insertion may be more comfortable if done midcycle, when the cervix is naturally dilated.[6]

Once in place, the IUS is approved for birth control for up to 5 years. The cumulative 5-year pregnancy rate is estimated to be 0.7%.[7]

The Mirena is intended to initially release a daily dose of 20 micrograms levonorgestrel (a progestin). No single mechanism accounts for the effectiveness of the IUS in preventing pregnancy; it has several effects on the reproductive system:

In general, IUS removal is easiest if undertaken toward the end of a woman's period and involves a doctor or trained nurse's use of a pair of forceps to take hold of the IUS's thread and gently retracting it.

A "lost coil" occurs when the thread cannot be felt by a woman on routine checking and is not seen on speculum examination.[12] Various thread collector devices or simple forceps may then be used to try and grasp the device through the cervix.[13] In the rare cases when this is unsuccessful, an ultrasound scan may be arranged to check the position of the coil and exclude its perforation through into the abdominal cavity or its unrecognised previous expulsion. Hysteroscopy is very rarely needed.

After removal of the IUS, normal fertility is regained after a few months, with a near-normal 80% of women able to conceive within 12 months.

The WHO Medical Eligibility Criteria for Contraceptive Use and RCOG Faculty of Family Planning & Reproductive Health Care (FFPRHC) UK Medical Eligibility Criteria for Contraceptive Use list the following as conditions where insertion of a levonorgestrel IUS is not usually recommended or should not be used because of an unacceptable health risk.:[14][15] According to Dr. Ayman A. A. Ewies in an abstract published in Gynecological Endocrinology, 31 July 2009 [16] the hormonal releasal of the Mirena is publicized to have a local effect but he shows that elevated levels of levonorgestrel have been found globally in some women because of various factors including low metabolic rates. He also states that weight gain is one of the major side effects.

Conditions that represent a health risk if a levonorgestrel IUS is inserted:

Conditions where the theoretical or proven risks usually outweigh the advantages of inserting a levonorgestrel IUS:

Side effects and complications

Following insertion, the IUS may be expelled through the cervix. An expulsion rate of 4% was observed in the manufacturer's clinical trials, with most (3%) occurring in the first year of use. Expulsion is more common in younger women, women who have not had children, and when an IUS is inserted immediately after childbirth or abortion.[18][19][20]

A rare but potentially serious complication is that of uterine perforation. This may occur either during the device's insertion or from its later embedment into the myometrium (uterine wall) and subsequent migration through to the intra-abdominal cavity. Perforation can cause internal scarring, infection, or damage to other organs, and may require surgery. Uterine perforation has been reported at rates ranging from 1 to 2.6 per 1000 insertions. It is believed that perforations are significantly underreported, however, and actual perforation rates are likely higher.[21]

Both expulsion and perforation result in loss of contraceptive cover, and the position of the thread of the IUS should be self-checked at least once per month to verify that it is still in place.

Pelvic inflammatory disease (PID) is caused by certain sexually transmitted diseases (STDs). PID is a serious condition that may result in infertility. IUDs can increase the risk of PID above baseline for the first 21 days after insertion and is related to the presence of an infection at the time of the insertion. STD testing should be offered at the time of an insertion. Current infection is not a reason to delay IUD insertion but if an infection is found after the insertion, the patient needs to be treated. The IUD does not need to be removed. 21 days after insertion the risk of PID returns to baseline for all women. [22]

However, like the oral contraceptive pill and other non-barrier forms of contraception, the IUS offers no protection against sexually transmitted disease.

An IUS may be inserted immediately postpartum (within 48 hours). With insertions after 48 hours, perforation of the uterus is more likely to occur when uterine involution is incomplete; involution usually completes by 4–6 weeks postpartum.[19] Special considerations apply to women who plan to breastfeed.

Also, to allow for uterine involution, insertion of an IUS is not recommended for women having had a D&E abortion (second-trimester abortion) within the past four weeks.[6] Post-abortion IUD is safe and effective and has only a slightly increased risk of expulsion compared to interval insertion.

Expulsion is more common when an IUS is inserted immediately after childbirth or abortion.[19][20]

Menstrual periods become lighter or, in about 20% of women, stop completely within one year of insertion.[7] Irregular bleeding is common in the first few months after insertion, with the average user reporting 16 days of bleeding or spotting in the first month of use, but this diminishes to about four days at 12 months.[25][26]

Enlarged follicles (ovarian cysts) have been diagnosed in about 12% of the subjects using a levonorgestrel IUS. Most of these follicles are asymptomatic, although some may be accompanied by pelvic pain or dyspareunia. In most cases the enlarged follicles disappear spontaneously during two to three months observation. Surgical intervention is not usually required.[7]

Progestogen-only contraceptives such as an IUS are not believed to affect milk supply or infant growth.[28] However, a study in the Mirena application for FDA approval found a lower continuation of breastfeeding at 75 days in IUS users (44%) versus copper IUD users (79%).[29]

When using Mirena®, about 0.1% of the maternal dose of levonorgestrel can be transferred via milk to the nursed infant.[30] A six-year study of breastfed infants whose mothers used a levonorgestrel-only method of birth control found the infants had increased risk of respiratory infections and eye infections, though a lower risk of neurological conditions, compared to infants whose mothers used a copper IUD.[31] No longer-term studies have been performed to assess the long-term effects on infants of levornogestrel in breast milk.

There are conflicting recommendations about use of Mirena while breastfeeding. The U.S. FDA does not recommend any hormonal method, including Mirena, as a first choice of contraceptive for nursing mothers.[citation needed] The World Health Organization recommends against immediate postpartum insertion, citing increased expulsion rates. It also reports concerns about potential effects on the infant's liver and brain development in the first six weeks postpartum. However, it recommends offering Mirena as a contraceptive option beginning at six weeks postpartum even to nursing women.[32] Planned Parenthood offers Mirena as a contraceptive option for breastfeeding women beginning at four weeks postpartum.[6]

Levongestrel IUS is not recommended for women who have, have had, or suspect they have breast cancer.[7][17]

Although it is one of the most effective methods of contraception, pregnancy may still occur. The risk of miscarriage or premature birth is increased for such pregnancies, the former particularly during the second trimester; these increased risks end if the IUD is removed after pregnancy is discovered.[35] No pattern of birth defects was found in the 35 babies for whom birth outcomes were available at the time of FDA approval.[36]

As many as half the pregnancies that occur in Mirena users may be ectopic. The incidence rate of ectopic pregnancies is approximately 1 per 1000 users per year.[37]

No evidence has been identified to suggest Mirena affects bone mineral density (BMD).[38] The only published study on the effect of Mirena on BMD showed that long-term users, at 7 years of use, had similar BMD at the midshaft of the ulna and at the distal radius as nonusers matched by age and BMI. In addition, BMD measurements were similar to the expected values for women in the same age group as the participants. The authors of the study said their results were predictable, since it is well established that the main factor responsible for bone loss in women is hypoestrogenism, and, in agreement with previous reports, they found estradiol levels in Mirena users to be normal.[39]

Progestasert was the first hormonal uterine device, developed in 1976[40] and manufactured until 2001. It contained progesterone that was released at a rate of 65 micrograms per day.[40] In most countries it was replaced annually, though it was approved for 18 months of use in France. It had a failure rate of 2% per year.[41]

Mirena was first marketed commercially in Finland in 1990, but not approved by the U.S. Food and Drug Administration until 2000. It is intended to initially release 20 micrograms of levonorgestrel per day and may be used for five years.

Contrel, the Belgian company that developed the frameless GyneFix IUD, is developing a lower-dose (14 micrograms levonorgestrel per day) T-frame IUS named Femilis. Femilis would come in a smaller size (Femilis Slim) for nulliparous women. It would be inserted without a plunger, and it is hoped its performance would be less dependent on the experience of the health care professional.

Several trials with positive results have been done on a frameless IUS called FibroPlant-LNG (also from Contrel). FibroPlant is anchored to the fundus of the uterus rather than being held in by a frame. It initially releases 14 micrograms of levonorgestrel per day, and may be used for at least three years. As of 2010, Fibroplant is available in Belgium from Dr Dirk Wildemeersch, the original researcher at Contrel, who carries out fittings at his office in Ghent.[43]