Ovarian cysts affect women of all ages. They occur most often, however, during a woman's childbearing years.

Some ovarian cysts cause problems, such as bleeding and pain. Surgery may be required to remove cysts larger than 5 centimeters in diameter.

There are several other conditions affecting the ovary that are described as types of cysts, but are not usually grouped with the functional cysts. (Some of these are more commonly or more properly known by other names.) These include: 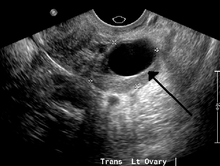 A 2cm left ovarian cyst as seen on ultrasound 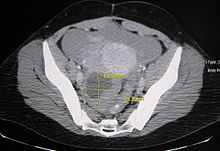 An Axial CT demonstrating a large hemorrhagic ovarian cyst. The cyst is delineated by the yellow bars with blood seen anteriorly.

Ovarian cysts are usually diagnosed by either ultrasound or CT scan.

About 95% of ovarian cysts are benign, meaning they are not cancerous.[7]

Treatment for cysts depends on the size of the cyst and symptoms.

Pain caused by ovarian cysts may be treated with:

Also, limiting strenuous activity may reduce the risk of cyst rupture or torsion.

Cysts that persist beyond two or three menstrual cycles, or occur in post-menopausal women, may indicate more serious disease and should be investigated through ultrasonography and laparoscopy, especially in cases where family members have had ovarian cancer. Such cysts may require surgical biopsy. Additionally, a blood test may be taken before surgery to check for elevated CA-125, a tumor marker, which is often found in increased levels in ovarian cancer, although it can also be elevated by other conditions resulting in a large number of false positives.[11]

For more serious cases where cysts are large and persisting, doctors may suggest surgery. Some surgeries can be performed to successfully remove the cyst(s) without hurting the ovaries, while others may require removal of one or both ovaries.[12][13]