An endometrioma, endometrioid cyst, endometrial cyst, or chocolate cyst of ovary is a condition related to endometriosis. 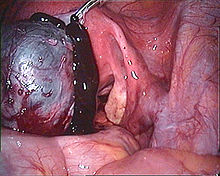 Endoscopic image of a ruptured chocolate cyst in left ovary.

It is caused by endometriosis,[1] and formed when a tiny patch of endometrial tissue (the mucous membrane that makes up the inner layer of the uterine wall) bleeds, sloughs off, becomes transplanted, and grows and enlarges inside the ovaries. As the blood builds up over months and years, it turns brown. When it ruptures, the material spills over into the pelvis and onto the surface of the uterus, bladder, bowel, and the corresponding spaces between.

Treatment for endometriosis can be medical or surgical.

Nonsteroidal anti-inflammatory drugs (NSAIDs) are frequently used first in patients with pelvic pain, particularly if the diagnosis of endometriosis has not been definitively (excision and biopsy) established. The goal of directed medical treatment is to achieve an anovulatory state. Typically, this is achieved initially using hormonal contraception. This can also be accomplished with progestational agents (i.e., medroxyprogesterone), danazol, gestrinone, or gonadotropin-releasing hormone agonists (GnRH), as well as other less well-known agents. These agents are generally used if oral contraceptives and NSAIDs are ineffective. GnRH can be combined with estrogen and progestogen (add-back therapy) without loss of efficacy but with fewer hypoestrogenic symptoms. These medications are often ineffective in treating endometriomas and any relief is short lived while taking the medications. Hormonal treatment has a large number of sometimes permanent side effects, such as hot flushes, loss of bone mass, deepening of voice, weight gain, and facial hair growth.

Laparoscopic surgical approaches include excision of ovarian adhesions and of endometriomas. Endometriomas frequently require surgical removal and excision is considered to be far superior in terms of permanent removal of the disease and pain relief. Surgery can sometimes have the effect of improving fertility but can have the adverse effect of leading to increases in cycle day 2 or 3 FSH for many patients. Laser surgery and cauterization are considered to be far less effective and only burn the top layer of endometrial tissue, allowing for the endometrioma and endometriosis to grow back quickly. Likewise, endometrioma drainage or sclerotherapy are somewhat controversial technique for removing endometriomas with varied degrees of success. Conservative surgery can be performed to preserve fertility in younger patients but as earlier stated can have the effect of raising FSH values and making the ovaries less productive, especially if functional ovarian tissue is removed in the surgical process. Operative laparoscopic surgery can provide pain relief and improved fertility. Radical surgical options could include singular or bilateral oophorectomy. [2][3]