Asherman's syndrome (AS), also called "uterine synechiae" or intrauterine adhesions (IUA), presents a condition characterized by the presence of adhesions and/or fibrosis within the uterine cavity due to scars. A number of other terms have been used to describe the condition and related conditions including: traumatic intrauterine adhesions, uterine/cervical atresia, traumatic uterine atrophy, sclerotic endometrium, endometrial sclerosis. In this article AS and IUA are used interchangeably. 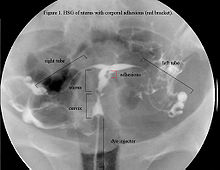 HSG view. Note: not the same uterus as in ultrasound or hysteroscopic view; this uterus appears to be T-shaped.

The cavity of the uterus is lined by the endometrium. This lining is composed of two layers, the functional layer which is shed during menstruation and an underlying basal layer, which is necessary for regenerating the functional layer. Trauma to the basal layer, typically after a dilation and curettage (D&C) performed after a miscarriage, or delivery, or for medical abortion, can lead to the development of intrauterine scars resulting in adhesions that can obliterate the cavity to varying degrees. In the extreme, the whole cavity can be scarred and occluded. Even with relatively few scars, the endometrium may fail to respond to estrogens and rests. Often, patients experience secondary menstrual irregularities characterized by changes in flow and duration of bleeding (amenorrhea, hypomenorrhea, or oligomenorrhea)[1] and become infertile. Menstrual anomalies are often but not always correlated with severity: adhesions restricted to only the cervix or lower uterus may block menstruation. Pain during menstruation and ovulation is also sometimes experienced and can be attributed to blockages.

Asherman's syndrome, AS, occurs most frequently after a D&C is performed on a recently pregnant uterus, following a missed or incomplete miscarriage, birth, or elective termination (abortion) to remove retained products of conception. As the same procedure is used in all three situations, AS can result in all of the above circumstances. It affects women of all races and ages as there is no underlying predisposition or genetic basis to its development. According to a study on 1900 patients with AS, over 90% of the cases occurred following pregnancy-related curettage.[2] Depending on the degree of severity, AS may result in infertility, repeated miscarriages, pain from trapped blood, and future obstetric complications[3](see Prognoses below). There is evidence that left untreated, the obstruction of menstrual flow resulting from adhesions can lead to endometriosis.,[4][5]

AS can also result from other pelvic surgeries including Cesarean sections,[2][6] removal of fibroid tumours (myomectomy) and from other causes such as IUDs, pelvic irradiation, schistosomiasis[7] and genital tuberculosis.[8] Chronic endometritis from genital tuberculosis is a significant cause of severe IUA in the developing world, often resulting in total obliteration of the uterine cavity which is difficult to treat.[9]

One study found a significant correlation between Müllerian anomalies and intrauterine adhesions.[10] This apparent correlation is attributed to women with congenital uterine anomalies being predisposed to miscarriages,[4][11] and therefore having higher rates of D&Cs performed than the general population, which could account for the higher rate of IUA observed.[12] It is also feasible that women with septate uteri and other Müllerian defects are at a higher risk of sustaining endometrial damage after blind D&C due to their atypical anatomy, particularly if the doctor performing the surgery was unaware of it.

An artificial form of AS can be surgically induced by endometrial ablation in women with excessive uterine bleeding, in lieu of hysterectomy.

In the case of missed miscarriages, the time period between fetal demise and curettage may increase the likelihood of adhesion formation due to fibroblastic activity of the remaining tissue [2][16]

The risk of AS also increases with the number of procedures: one study estimated the risk to be 16% after one D&C and 32% after 3 or more D&Cs,[17] however a single curettage often underlies the condition.

Prevalence in the general population

The true prevalence of AS is unclear as many doctors are unaware of the symptoms or diagnosis. It is estimated that up to 5% of D&Cs result in AS[citation needed]. More conservative estimates put this rate at 1%[citation needed], however, this seems an underestimate given the incidence of IUA following curettage reported in prospective studies and the number of D&Cs performed annually.Increased awareness about the condition and its diagnosis is also expected to reveal a higher frequency than previously reported. The condition was found in 1.5% of women undergoing HSG,[18] and between 5 and 39% of women with recurrent miscarriage.[19][20][21]

The history of a pregnancy event followed by a D&C leading to secondary amenorrhea or hypomenorrhea is typical. Hysteroscopy is the gold standard for diagnosis.[3] Imaging by sonohysterography or hysterosalpingography will reveal the extent of the scar formation. Ultrasound is not a reliable method of diagnosing Asherman's Syndrome. Hormone studies show normal levels consistent with reproductive function.

Various classification systems were developed to describe Asherman’s syndrome (citations to be added), some taking into account the amount of functioning residual endometrium, menstrual pattern, obstetric history and other factors which are thought to play a role in determining the prognoses. With the advent of techniques which allow visualization of the uterus, classification systems were developed to take into account the location and severity of adhesions inside the uterus. This is useful as mild cases with adhesions restricted to the cervix may present with amenorrhea and infertility, showing that symptoms alone do not necessarily reflect severity. Other patients may have no adhesions but amenorrhea and infertility due to a sclerotic atrophic endometrium. The latter form has the worst prognosis.

Fertility may sometimes be restored by removal of adhesions, depending on the severity of the initial trauma and other individual patient factors. Operative hysteroscopy is used for visual inspection of the uterine cavity during adhesion dissection (adhesiolysis).However, hysteroscopy is yet to become a routine gynaecological procedure and only 15% of US gynecologists perform office hysteroscopy {Isaacson, 2002}. Adhesion dissection can be technically difficult and must be performed with care in order to not create new scars and further exacerbate the condition. In more severe cases, adjunctive measures such as laparoscopy are used in conjunction with hysteroscopy as a protective measure against uterine perforation. Microscissors are usually used to cut adhesions. Electrocauterization is not recommended.[22]

As IUA frequently reform after surgery, techniques have been developed to prevent recurrence of adhesions. Methods to prevent adhesion reformation include the use of mechanical barriers (Foley catheter, saline-filled Cook Medical Balloon Uterine Stent, IUCD) and gel barriers (Seprafilm, Spraygel, autocrosslinked hyaluronic acid gel Hyalobarrier) to maintain opposing walls apart during healing {Tsapanos, 2002}; {Guida, 2004};{Abbott, 2004}, thereby preventing the reformation of adhesions. Antibiotic prophylaxis is necessary in the presence of mechanical barriers to reduce the risk of possible infections. A common pharmacological method for preventing reformation of adhesions is sequential hormonal therapy with estrogen followed by a progestin to stimulate endometrial growth and prevent opposing walls from fusing together {Roge, 1996}. However there have been no RCTs comparing post-surgical adhesion reformation with and without hormonal treatment and the ideal dosing regimen or length of estrogen therapy is not known. The absence of prospective randomized controlled trials (RCTs) comparing treatment methods makes it difficult to recommend optimal treatment protocols. Furthermore, diagnostic severity and outcomes are assessed according to different criteria (e.g. menstrual pattern, adhesion reformation rate, conception rate, live birth rate). Clearly, more comparable studies are needed in which reproductive outcome can be analysed systematically.

Follow-up tests (HSG, hysteroscopy or SHG) are necessary to ensure that adhesions have not reformed. Further surgery may be necessary to restore a normal uterine cavity. According to a recent study among 61 patients, the overall rate of adhesion recurrence was 27.9% and in severe cases this was 41.9%.[23] Another study found that postoperative adhesions reoccur in close to 50% of severe AS and in 21.6% of moederate cases.[3] Mild IUA, unlike moderate to severe synechiae, do not appear to reform.

The extent of adhesion formation is critical. Mild to moderate adhesions can usually be treated with success. Extensive obliteration of the uterine cavity or fallopian tube openings (ostia) and deep endometrial or myometrial trauma may require several surgical interventions and/or hormone therapy or even be uncorrectable. If the uterine cavity is adhesion free but the ostia remain obliterated, IVF remains an option. If the uterus has been irreparably damaged, surrogacy or adoption may be the only options.

Patients who carry a pregnancy even after treatment of IUA may have an increased risk of having abnormal placentation including placenta accreta[24] where the placenta invades the uterus more deeply, leading to complications in placental separation after delivery. Premature delivery,[25] second-trimester pregnancy loss,[26] and uterine rupture[27] are other reported complications. They may also develop incompetent cervix where the cervix can no longer support the growing weight of the fetus, the pressure causes the placenta to rupture and the mother goes into premature labour. Cerclage is a surgical stitch which helps support the cervix if needed.[26]

Age is another factor contributing to fertility outcomes after treatment of AS. For women under 35 years of age treated for severe adhesions, pregnancy rates were 66.6% compared to 23.5% in women older than 35.[24]

The recently pregnant uterus is particularly soft under the influence of hormones and hence, easily injured. D&C (including dilation and curettage, dilation and evacuation/suction curettage and manual vacuum aspiration) is a blind, invasive procedure, making it difficult to avoid endometrial trauma. Medical alternatives to D&C for evacuation of retained placenta/products of conception exist including misoprostol and mifepristone or RU486. Studies show this less invasive and cheaper method to be an efficacious, safe and an acceptable alternative to surgical management for most women.[29][30] It was suggested as early as in 1993[17] that the incidence of IUA might be lower following medical evacuation (e.g. Misoprostol) of the uterus, thus avoiding any intrauterine instrumentation. So far, one study supports this proposal, showing that women who were treated for missed miscarriage with misoprostol did not develop IUA, while 7.7% of those undergoing D&C did.[31] The advantage of misoprostol is that it can be used for evacuation not only following miscarriage, but also following birth for retained placenta or hemorrhaging.

Alternatively, D&C could be performed under ultrasound guidance rather than as a blind procedure. This would enable the surgeon to end scraping the lining when all retained tissue has been removed, avoiding injury.

Early monitoring during pregnancy to identify miscarriage can prevent the development of, or as the case may be, the recurrence of AS, as the longer the period after fetal death following D&C, the more likely adhesions may be to occur.[2] Therefore immediate evacuation following fetal death may prevent IUA.

The use of hysteroscopic surgery instead of D&C to remove retained products of conception or placenta is another alternative, although it could be less effective if tissue is abundant. Also, hysteroscopy is not a widely or routinely used technique and requires expertise.

There is no data to indicate that suction D&C is less likely than sharp curette to result in Asherman's. A recent article describes three cases of women who developed intrauterine adhesions following manual vacuum aspiration.[32]

It is also known as Fritsch syndrome, or Fritsch-Asherman syndrome.