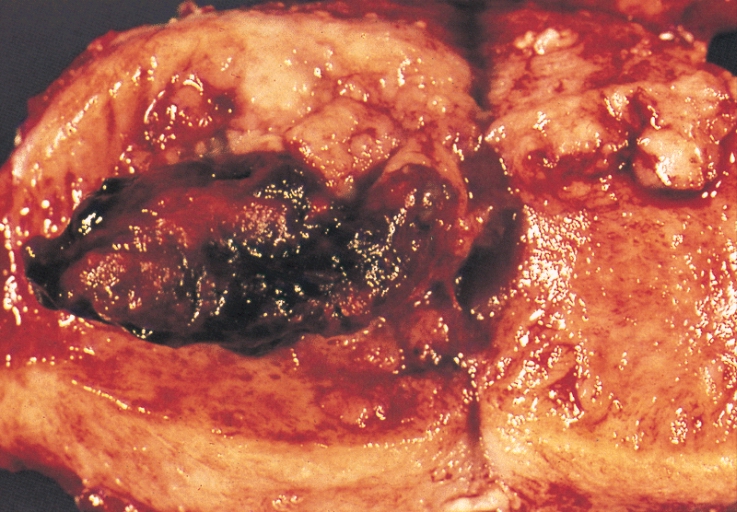 Endometrial cancer refers to several types of malignancy which arise from the , or lining of the . Endometrial cancers are the most common gynecologic cancers in the United States, with over 35,000 women diagnosed each year in the U.S. The most common subtype, "endometrioid adenocarcinoma," typically occurs within a few decades of , is associated with excessive exposure, often develops in the setting of , and presents most often with . Endometrial carcinoma is the third most common cause of gynecologic cancer death (behind ovarian and ). A total abdominal (surgical removal of the uterus) with bilateral salpingo-oophorectomy is the most common therapeutic approach.

Endometrial cancer may sometimes be referred to as "". However, different cancers may develop not only from the endometrium itself but also from other tissues of the uterus, including , sarcoma of the , and .

*Type I: These cancers occur most commonly in pre- and peri-menopausal women, often with a history of unopposed exposure and/or . They are often minimally invasive into the underlying uterine wall, are of the "low-grade endometrioid" type, and carry a good prognosis.

*Type II: These cancers occur in older, post-menopausal women, are more common in , and are not associated with increased exposure to estrogen. They are typically of the "high-grade endometrioid", "papillary serous" or "clear cell" types, and carry a generally poor prognosis

In contrast to "endometrial carcinomas", the uncommon "endometrial stromal " are cancers which originate in the non-glandular of the endometrium. Uterine ,"formerly called Malignant mixed müllerian tumor", is a rare uterine cancer which contains cancerous cells of both glandular and tous appearance - in this case, the cell of origin is unknown.

*high levels of estrogen
*endometrial hyperplasia
*obesity
*hypertension
*polycystic ovary syndrome
*nulliparity (never having carried a pregnancy)
*infertility (inability to become pregnant)
*early menarche (onset of menstruation)
*late menopause (cessation of menstruation)
*endometrial polyps or other benign growths of the uterine lining
*diabetes
*Tamoxifen
*hyperplasia
*high intake of animal fat
*pelvic radiation therapy
*breast cancer
*ovarian cancer
*heavy daily alcohol consumption (possibly a risk factor) [3] ["Thirteen studies to date have reported on the relationship between endometrial cancer and alcohol consumption. Only two of these studies have reported that endometrial cancer incidence is associated with consumption of alcohol; all the others have reported either no definite association, or an inverse association." (Six studies showed an inverse association; that is, drinking was associated with a lower risk of endometrial cancer) "…if such an inverse association exists, it appears to be more pronounced in younger, or premenopausal, women." [3] "Our results suggest that only alcohol consumption equivalent to 2 or more drinks per day increases risk of endometrial cancer in postmenopausal women."]

Routine screening of asymptomatic women is not indicated, since the disease is highly curable in its early stages. Results from a are frequently normal, especially in the early stages of disease. Changes in the size, shape or consistency of the uterus and/or its surrounding, supporting structures may exist when the disease is more advanced.

*A may be either normal or show abnormal cellular changes.
*Endometrial is the traditional diagnostic method. Both endometrial and endocervical material should be sampled.
*If endometrial curettage does not yield sufficient diagnostic material, a (D&C) is necessary for diagnosing the cancer.
* or aspiration may assist the diagnosis.
*Transvaginal to evaluate the endometrial thickness in women with postmenopausal bleeding is increasingly being used to evaluate for endometrial cancer.
* Recently, a new method of testing has been introduced called the TruTest, offered through . It uses the small flexible to brush the entire lining of the uterus. This method is less painful than a biopsy and has a larger likelihood of procuring enough tissue for testing. Since it is simpler and less invasive, the TruTest can be performed as often, and at the same time as, a routine Pap smear, thus allowing for early detection and treatment.
* Ongoing research suggests that serum p53 antibody may hold value in identifying high-risk endometrial cancer. [ Am J Obstet Gynecol. 2007 Nov;197(5):505.e1-7 PMID: 17980190 ] Diagnostic test study of S-p53 Ab and agreement study for high-risk endometrial cancer Kappa: 0.70 Sensitivity (%): 64 Specificity(%): 96 PPV: 78 NPV: 92

The histopathology of endometrial cancers is highly diverse. The most common finding is a "well-differentiated endometrioid adenocarcinoma", which is composed of numerous, small, crowded glands with varying degrees of nuclear atypia, mitotic activity, and stratification. This often appears on a background of endometrial hyperplasia. Frank adenocarcinoma may be distinguished from atypical hyperplasia by the finding of clear stromal invasion, or "back-to-back" glands which represent nondestructive replacement of the endometrial stroma by the cancer. With progression of the disease, the myometrium is infiltrated.

Patients with newly-diagnosed endometrial cancer do not routinely undergo imaging studies, such as s to evaluate for extent of disease, since this is of low yield. Preoperative evaluation should include a complete medical history and physical examination, pelvic examination and rectal examination with , chest X-ray, complete blood count, and blood chemistry tests, including liver function tests. Colonoscopy is recommended if the stool is guaiac positive or the woman has symptoms, due to the etiologic factors common to both endometrial cancer and . The tumor marker is sometimes checked, since this can predict advanced stage disease. [Dotters DJ. Preoperative CA 125 in endometrial cancer: is it useful? Am J Obstet Gynecol 2000;182:1328-34. PMID 10871446.]

The primary treatment is surgical. Surgical treatment should consist of, at least, cytologic sampling of the peritoneal fluid, abdominal exploration, palpation and biopsy of suspicious lymph nodes, abdominal , and removal of both ovaries (bilateral salpingo-oophorectomy). Lymphadenectomy, or removal of pelvic and para-aortic lymph nodes, is sometimes performed for tumors that have high risk features, such as pathologic grade 3 serous or clear-cell tumors, invasion of more than 1/2 the myometrium, or extension to the cervix or adnexa. Sometimes, removal of the is also performed.

Abdominal hysterectomy is recommended over vaginal hysterectomy because it affords the opportunity to examine and obtain washings of the abdominal cavity to detect any further evidence of cancer.

Women with stage 1 disease who are at increased risk for recurrence and those with stage 2 disease are often offered surgery in combination with [ Brachytherapy. 2008 Mar 19 PMID: 18358790 ] . may be considered in some cases, especially for those with stage 3 and 4 disease. hormonal therapy with progestins and antiestrogens has been used for the treatment of endometrial stromal sarcomas. [ [http://www.cancer.org/docroot/CRI/content/CRI_2_4_4X_Hormone_Therapy_63.asp?sitearea] American Cancer Society - Uterine Sarcomas - Hormonal Therapy (accessed 5-25-07)]

*A perforation (hole) of the uterus may occur during a D&C or an endometrial biopsy.

The stress of illness can often be helped by joining a where members share common experiences and problems.

Endometrial cancer occurs in both premenopausal (25%) and postmenopausal women (75%). The most commonly affected age group is between 50 and 59 years of age. Most tumors are caught early and thus prognosis is good and morbidity is declining.