Retinal detachment is a disorder of the eye in which the retina peels away from its underlying layer of support tissue. Initial detachment may be localized, but without rapid treatment the entire retina may detach, leading to vision loss and blindness. It is a medical emergency.[1]

The retina is a thin layer of light sensitive tissue on the back wall of the eye. The optical system of the eye focuses light on the retina much like light is focused on the film in a camera. The retina translates that focused image into neural impulses and sends them to the brain via the optic nerve. Occasionally, posterior vitreous detachment, injury or trauma to the eye or head may cause a small tear in the retina. The tear allows vitreous fluid to seep through it under the retina, and peel it away like a bubble in wallpaper.

A minority of retinal detachments result from trauma, including blunt blows to the orbit, penetrating trauma, and concussions to the head. A retrospective Indian study of more than 500 cases of rhegmatogenous detachments found that 11% were due to trauma, and that gradual onset was the norm, with over 50% presenting more than one month after the inciting injury.[2] 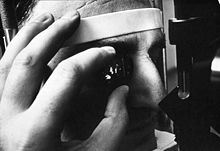 A physician using a "three-mirror glass" to diagnose retinal detachment

The incidence of retinal detachment in otherwise normal eyes is around 5 new cases in 100,000 persons per year.[3] Detachment is more frequent in middle-aged or elderly populations, with rates of around 20 in 100,000 per year.[4] The lifetime risk in normal individuals is about 1 in 300.[5]

Although retinal detachment usually occurs in just one eye, there is a 15% chance of it developing in the other eye, and this risk increases to 25–30% in patients who have had cataracts extracted from both eyes.[6]

A retinal detachment is commonly preceded by a posterior vitreous detachment which gives rise to these symptoms:

Although most posterior vitreous detachments do not progress to retinal detachments, those that do produce the following symptoms:

There are several methods of treating a detached retina, each of which depends on finding and closing the breaks that have formed in the retina. All three of the procedures follow the same three general principles:

Cryopexy and Laser Photocoagulation
Cryotherapy (freezing) or laser photocoagulation are occasionally used alone to wall off a small area of retinal detachment so that the detachment does not spread.

Scleral buckle surgery
Scleral buckle surgery is an established treatment in which the eye surgeon sews one or more silicone bands (bands, tyres) to the sclera (the white outer coat of the eyeball). The bands push the wall of the eye inward against the retinal hole, closing the break or reducing fluid flow through it and reducing the effect of vitreous traction thereby allowing the retina to re-attach. Cryotherapy (freezing) is applied around retinal breaks prior to placing the buckle. Often subretinal fluid is drained as part of the buckling procedure. The buckle remains in situ. The most common side effect of a scleral operation is myopic shift. That is, the operated eye will be more short sighted after the operation. Radial scleral buckle is indicated to U-shaped tears or Fishmouth tears and posterior breaks. Circumferential scleral buckle indicated to multiple breaks, anterior breaks and wide breaks. Encircling buckles indicated to breaks more than 2 quadrant of retinal area, lattice degeration located on more than 2 quadrant of retinal area, undetectable breaks, and proliferative vitreous retinopathy.

Pneumatic retinopexy
This operation is generally performed in the doctor's office under local anesthesia. It is another method of repairing a retinal detachment in which a gas bubble (SF6 or C3F8 gas) is injected into the eye after which laser or freezing treatment is applied to the retinal hole. The patient's head is then positioned so that the bubble rests against the retinal hole. Patients may have to keep their heads tilted for several days to keep the gas bubble in contact with the retinal hole. The surface tension of the air/water interface seals the hole in the retina, and allows the retinal pigment epithelium to pump the subretinal space dry and suck the retina back into place. This strict positioning requirement makes the treatment of the retinal holes and detachments that occurs in the lower part of the eyeball impractical. This procedure is usually combined with cryopexy or laser photocoagulation.

Vitrectomy
Vitrectomy is an increasingly used treatment for retinal detachment. It involves the removal of the vitreous gel and is usually combined with filling the eye with either a gas bubble (SF6 or C3F8 gas) or silicon oil. An advantage of using gas in this operation is that there is no myopic shift after the operation and gas is absorbed within a few weeks. Silicon oil (PDMS), if filled needs to be removed after a period of 2–8 months depending on surgeon's preference. Silicon oil is more commonly used in cases associated with proliferative vitreo-retinopathy (PVR). A disadvantage is that a vitrectomy always leads to more rapid progression of a cataract in the operated eye. In many places vitrectomy is the most commonly performed operation for the treatment of retinal detachment.

85 percent of cases will be successfully treated with one operation with the remaining 15 percent requiring 2 or more operations. After treatment patients gradually regain their vision over a period of a few weeks, although the visual acuity may not be as good as it was prior to the detachment, particularly if the macula was involved in the area of the detachment. However, if left untreated, total blindness could occur in a matter of days.

History of cataract surgery is an important risk factor for rhegmatogenous retinal detachment, which can manifest long after the operation has been completed. The risk is increased when there are complications during cataract surgery.

Retinal detachment can be mitigated in some cases when the warning signs[12] are caught early. The most effective means of prevention and risk reduction is through education of the initial signs, and encouragement for people to seek ophthalmic medical attention if they suffer from symptoms suggestive of a posterior vitreous detachment.[13] Early examination allows detection of retinal tears which can be treated with laser or cryotherapy. This reduces the risk of retinal detachment in those who have tears from around 1:3 to 1:20. For this reason, the governing bodies in some sports require regular eye examination.

Trauma-related cases of retinal detachment can occur in high-impact sports (eg boxing, karate, kickboxing, American football) or in high speed sports (eg automobile racing, sledding). Although some doctors recommend avoiding activities that increase pressure in the eye, including diving and skydiving, there is little evidence to support this recommendation, especially in the general population. Nevertheless, ophthalmologists generally advise patients with high degrees of myopia to try to avoid exposure to activities that have the potential for trauma, increase pressure on or within the eye itself, or include rapid acceleration and deceleration.

Intraocular pressure spikes occur during any activity accompanied by the Valsalva maneuver, including weightlifting.[14] An epidemiological study suggests that heavy manual lifting at work may be associated with increased risk of rhegmatogenous retinal detachment.[15][16] In this study, obesity also appeared to increase the risk of retinal detachment.