Medical care and loss of wages caused by Opisthorchis viverrini in Laos and in Thailand costs about $120 million annually[1] or $120 million per year can cost Northeast Thailand only.[2]

Infection of Opisthorchis viverrini and of other liver flukes in Asia affect the poor and poorest people.[3] Opisthorchiasis have received less attention in comparison of other diseases and it is a neglected disease in Asia.[3]

Prevalence of Opisthorchis viverrini in Thailand in 1990–2001 correlates with a higher cholangiocarcinoma:
19.3% in North Thailand,
15.7% in North East Thailand,
3.8% in Central Thailand,
0% in Southern Thailand.[4]

Opisthorchiasis is prevalent in geographical regions where raw cyprinid fishes are a staple of the diet of humans.[5] The prevalence of human infection can be as high as 70% in some regions, for example in Khon Kaen Province in Thailand.[5] The parasite establishes in the bile ducts of the liver as well as extrahepatic ducts and the gall bladder of the mammalian (definitive) host.[5]

Children under the age of 5 are rarely infected by Opisthorchis viverrini.[1]

In the Lao People's Democratic Republic, the prevalence of opisthorchiasis was:

In Thailand, the prevalence of opisthorchiasis was:

Opisthorchis viverrini was thought to be the only species of liver fluke in Thailand,[9] but PCR techniques have revealed also Clonorchis sinensis in (central) Thailand in 2008.[12]

Another reference from 2002 lists worldwide number of cases about 9 million (without year of estimation).[1] In Thailand, about 7.3 million.[1] About 50 million people are at risk of infection.[1]

Keiser & Utzinger (2005)[13] have speculated that aquaculture development is the key risk factor for foodborne trematodiases including opisthorchiasis caused by Opisthorchis viverrini.[13] 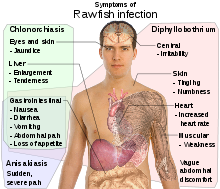 About 80% of infected people have no symptoms, though they can have eosinophilia.[1] This is when the infection is weak and there are less than 1000 eggs in one gram in feces.[1]

When there are 10.000-30.000 eggs in one gram of feces, then the infection is heavy.[1] Symptoms of heavier infections with Opisthorchis viverrini may include: diarrhoea, pain in epigastric and pain in the upper right quadrant, lack of appetite (anorexia), fatigue, yellowing of the eyes and skin (jaundice) and mild fever.[1]

These parasites are long-lived and cause heavy chronic infections may led to accumulation of fluid in legs (edema) and in the peritoneal cavity (ascites),[1] enlarged non-functional gall-bladder[1] and also cholangitis,[5] which can lead to periductal fibrosis, cholecystitis and cholelithiasis, obstructive jaundice, hepatomegaly and/or fibrosis of the periportal system.[5]

Importantly, both experimental and epidemiological evidence strongly implicates Opisthorchis viverrini infections in the etiology of a malignant cancer of the bile ducts (cholangiocarcinoma) in humans which has a very poor prognosis.[5] Indeed, Clonorchis sinensis and Opisthorchis viverrini are both categorized by the International Agency for Research on Cancer (IARC) as Group 1 carcinogens.[5]

In humans, the onset of cholangiocarcinoma occurs with chronic opisthorchiasis, associated with hepatobiliary damage, inflammation, periductal fibrosis and/or cellular responses to antigens from the infecting fluke.[5] These conditions predispose to cholangiocarcinoma, possibly through an enhanced susceptibility of DNA to damage by carcinogens.[5] Chronic hepatobiliary damage is reported to be multi-factorial and considered to arise from a continued mechanical irritation of the epithelium by the flukes present, particularly via their suckers, metabolites and excreted/secreted antigens as well as immunopathological processes.[5] In regions where Opisthorchis viverrini is highly endemic, the incidence of cholangiocarcinoma is unprecedented.[5] For instance, cholangiocarcinomas represent 15% of primary liver cancer worldwide, but in Thailand's Khon Kaen region, this figure escalates to 90%, the highest recorded incidence of this cancer in the world.[5] Of all cancers worldwide from 2002, 0.02% were cholangiocarcinoma caused by Opisthorchis viverrini.[4]

The cancer of the bile ducts caused by opisthorchiasis occur in the ages 25–44 years in Thailand.[6]

For medical diagnosis there is need to find eggs of Opisthorchis viverrini in feces[1] using Kato technique.[6]

An antigen 89 kDa of Opisthorchis viverrini can be detected by ELISA test.[1]

A PCR test capable of amplifying a segment of the internal transcribed spacer region of ribosomal DNA for the opisthorchiid and heterophyid flukes eggs taken directly from faeces was developed and evaluated in a rural community in central Thailand.[12] The lowest quantity of DNA that could be amplified from individual adults of Opisthorchis viverrini was estimated to 0.6 pg.[12]

Currently, there is no effective chemotherapy to combat cholangiocarcinoma, such that intervention strategies need to rely on the prevention or treatment of liver fluke infection/disease.[5] Although effective prevention could be readily achieved by persuading people to consume cooked fish (via education programs), the ancient cultural custom to consume raw, undercooked or freshly pickled fish persists in endemic areas.[5] Cooking or deep-freezing (-20 °C for 7 days)[8] of food made of fish is sure method of prevention.[1] Methods for prevention of Opisthorchis viverrini in aquaculture fish ponds were proposed by Khamboonruang et al. (1997).[14]

There was unsuccessful use of chloroquine for opisthorchiasis treatment in 1951-1968.[6]

Thus, currently, the control of opisthorchiasis relies predominantly on anthelmintic treatment with praziquantel.[5] The single dose of praziquantel of 40 mg/kg is effective against opisthorchiasis and also against schistosomiasis.[6] A randomised-controlled trial published in 2011 showed that the broad-spectrum anti-helminthic, tribendimidine, appears to be at least as efficacious as praziquantel.[15]

Artemisinin was also found to have anthelmintic activity against Opisthorchis viverrini.[16]

Despite the efficacy of this compound, the lack of an acquired immunity to infection predisposes humans to reinfections in endemic regions.[5] In addition, under experimental conditions, the short-term treatment of Opisthorchis viverrini-infected hamsters with praziquantel (400 mg per kg of live weight) has been shown to induce a dispersion of parasite antigens, resulting in adverse immunopathological changes as a result of oxidative and nitrative stresses following re-infection with Opisthorchis viverrini, a process which has been proposed to initiate and/or promote the development of cholangiocarcinoma in humans.[5]

Given the current reliance on a single trematocidal drug against Opisthorchis viverrini, there is substantial merit in searching for new intervention methods, built on a detailed understanding of the interplay between the parasites and their hosts as well as the biology of the parasites themselves at the molecular level.[5] Furthermore, the characterization of the genes expressed in these parasites should assist in elucidating the molecular mechanisms by which opisthorchiasis initiate and enhance the development of cholangiocarcinoma.[5]