Acari (or Acarina) are a taxon of arachnids that contains mites and ticks. The diversity of the Acari is extraordinary and its fossil history goes back to at least the early Devonian period.[1] As a result, acarologists (the people who study mites and ticks) have proposed a complex set of taxonomic ranks to classify mites. In most modern treatments, the Acari is considered a subclass of Arachnida and is composed of 2-3 superorders or orders: Acariformes (or Actinotrichida), Parasitiformes (or Anactinotrichida), and Opilioacariformes; the latter is often considered a subgroup within the Parasitiformes. The monophyly of the Acari is open to debate, and the relationships of the acarines to other arachnids is not at all clear. In older treatments, the subgroups of the Acarina were placed at order rank, but as their own subdivisions have become better-understood, it is more usual to treat them at superorder rank.

Most acarines are minute to small (e.g. 0.08–1.00 millimetre or 0.0031–0.039 inch), but the largest Acari (some ticks and red velvet mites) may reach lengths of 10–20 millimetres (0.39–0.79 in). It is estimated that over 50,000 species have been described (as of 1999) and that a million or more species are currently living. The study of mites and ticks is called acarology (from Greek ἀκαρί/ἄκαρι, akari, a type of mite; and -λογία, -logia),[2] and the leading scientific journals for acarology include Acarologia, Experimental and Applied Acarology and the International Journal of Acarology.

Mites are arachnids and, as such, should have a segmented body with the segments organised into two tagmata: a prosoma (cephalothorax) and an opisthosoma (abdomen). However, only the faintest traces of primary segmentation remain in mites; the prosoma and opisthosoma are insensibly fused, and a region of flexible cuticle (the cirumcapitular furrow) separates the chelicerae and pedipalps from the rest of the body. This anterior body region is called the capitulum or gnathosoma and, according to some workers, is also found in Ricinulei. The remainder of the body is called the idiosoma and is unique to mites.

The mouth parts of mites may be adapted for biting, stinging, sawing or sucking. They breathe through tracheae, stigmata (small openings of the skin), intestines and the skin itself. Species hunting for other mites have very acute senses, but many mites are eyeless. The central eyes of arachnids are always missing, or they are fused into a single eye. Thus, any eye number from none to five may occur.[3]

A soft-bodied tick of the family Argasidae, beside eggs it has just laid

Acarine ontogeny typically consists of an egg, a prelarval stage (often absent), a larval stage (hexapod except in Eriophyoidea which have only two pairs of legs), and a series of nymphal stages. Any or all of these stages except the adult may be suppressed or occur only within the body of a previous stage. Larvae (and prelarvae) have a maximum of three pairs of legs (legs are often reduced to stubs or absent in prelarvae); legs IV are added at the first nymphal stage. Usually a maximum of three nymphal stages are present and they are referred to in sequence as protonymph, deutonymph, and tritonymph; however, some soft ticks have supernumerary nymphal stages. The females of some Tarsonemidae bear sexually mature young. If one or more nymphal stages are absent, then authors may disagree on which stages are present. Only the Oribatida pass through all developmental stages.[3]

Acarines are extremely diverse. They live in practically every habitat, and include aquatic (freshwater and sea water) and terrestrial species. They outnumber other arthropods in the soil organic matter and detritus. Many are parasitic, and they affect both vertebrates and invertebrates. Most parasitic forms are external parasites, while the free living forms are generally predatory and may even be used to control undesirable arthropods. Others are detritivores that help to break down forest litter and dead organic matter such as skin cells. Others still are plant feeders and may damage crops.

Damage to crops is perhaps the most costly economic effect of mites, especially by the spider mites and their relatives (Tetranychoidea), earth mites (Penthaleidae), thread-footed mites (Tarsonemidae) and the gall and rust mites (Eriophyidae).

Some parasitic forms affect humans and other mammals, causing damage by their feeding, and can even be vectors of diseases such as scrub typhus, rickettsialpox, Lyme disease, Q fever, Colorado tick fever, tularemia, tick-borne relapsing fever, babesiosis, ehrlichiosis and tick-borne meningoencephalitis.[4] A well known effect of mites on humans is their role as an allergen and the stimulation of asthma in people affected by respiratory disease.

The use of predatory mites (e.g. Phytoseiidae) in pest control and herbivorous mites that infest weeds are also of importance. An unquantified, but major positive contribution of the Acari is their normal functioning in ecosystems, especially their roles in the decomposer subsystem.[2]

Chemical agents used to control ticks and mites include dusting sulfur and ivermectin. 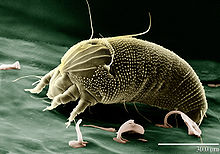 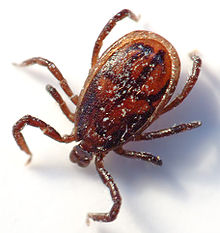 The phylogeny of the Acari is still disputed and several taxonomic schemes have been proposed for their classification. The third edition of the standard textbook A Manual of Acarology uses a system of six orders, grouped into two superorders:[5]