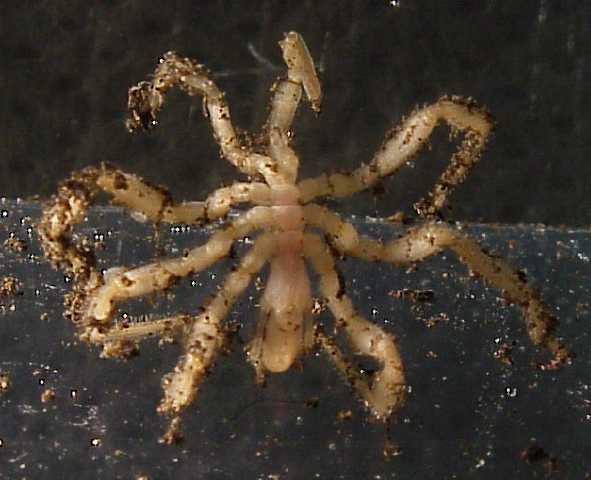 Sea spiders, also called Pantopoda or pycnogonids ('pycnogonid' = Greek for 'thick knee'), are marine s of class Pycnogonida. They are cosmopolitan, found especially in the Mediterranean and s and the Arctic and s. There are over 1300 known species, ranging in size from 1-10 mm, to over 90 cm in some deep water species. Most are toward the smaller end of this range in relatively shallow depths, however, they can grow to be quite large in Antarctic waters.

"Sea spiders" are not actual spiders. They are not even arachnids, but more distantly related arthropods.

Sea spiders have long legs in contrast to a small body size. The number of walking legs is usually eight (four pairs), but species with five and six pairs exist. Because of their small size and slender body and legs, no is necessary, with gases moving by . A allows them to suck nutrients from soft-bodied , and their digestive tract has diverticula extending into the legs.

Pycnogonids are so small that each of their tiny s consists of only one single cell, surrounded by . The anterior region consists of the proboscis, which has fairly limited dorsoventral and lateral movement, and three to four including the s, which are used in caring for young and cleaning as well as . In some species, the chelifores, palps and ovigers can be reduced or missing in adults. In those species that lacks s and s, the is well developed and more mobile and flexible, often equipped with numerous sensory bristles and strong rasping ridges around the mouth. The last segment includes the and tubercle, which projects dorsally.

In total, Pycnogonids have four to six pairs of legs for walking as well as other appendages which often resemble legs. A and much smaller make up the extremely reduced body of the Pycnogonid, which has up to two pairs of dorsally located simple eyes on its non-calcareous , though sometimes the eyes can be missing, especially among species living in the deep oceans. The abdomen does not have any appendages, and in most species it is reduced and almost vestigial. The organs of this extend throughout many appendages because its body is too small to accommodate all of them alone.

The morphology of the sea spider creates an extremely well-suited surface-area to volume ratio for any respiration to occur through direct diffusion. The most recent research seems to indicate that waste leaves the body through the digestive tract or is lost during a moult. The small, long, thin pycnogonid heart beats vigorously at 90 to 180 beats per minute, creating substantial blood pressure. These creatures possess an open circulatory system as well as a nervous system consisting of a brain which is connected to two ventral nerve cords, which in turn connect to specific nerves.

All pycnogonid species have separate sexes except for one species that is . Females possess a pair of ovaries, while males possess a pair of testes located dorsally in relation to the digestive tract. Scientists are aware that reproduction involves external fertilisation after “a brief courtship”, but very little is known about the secret lives of most pycnogonids. Only males care for laid eggs and young. The larva has a blind gut and the body consist literally of a head and its three pairs of cephalic appendages only: the chelifores, palps and ovigers. The abdomen and the thorax with its thoracic appendages develops later. One theory is that this reflects how a common ancestor of all arthropods evolved; starting its life as a small animal with a pair of appendages used for feeding and two pairs used for locomotion, while new segments and segmental appendages were gradually added as it was growing. At least four types of larvae have been described: the typical protonymphon larva, the encysted larva, the atypical protonymphon larva, and the attaching larva. The typical protonymphon larva is most common, is free living and gradually turns into an adult. The encysted larva is a parasite that hatches from the egg and finds a host in the shape of a polyp colony where it burrows into and turns into a cyst, and will not leave the host before it has turned into a young juvenile. Not much is known about the development of the atypical protonymphon larva. The adults are free living, while the larvae and the juveniles are living on or inside temporary hosts such as polychaetes and clams. When the attaching larva hatches it still looks like an embryo, and immediately attaches itself to the ovigerous legs of the father, where it will stay until it has turned into a small and young juvenile with two or three pairs of walking legs ready for a free-living existence.

These small animals live in many different parts of the world, from , , and the coast of the , to the and the , to the north and south poles. They are most common in shallow waters, but can be found as deep as 7,000 s, and live in both marine and estuarine habitats. Pycnogonids are well camouflaged beneath the rocks and among the that are found along shorelines.

Sea spiders either walk along the bottom with their stilt-like legs or swim just above it using an umbrella pulsing motion. [ [http://deepseanews.blogspot.com/2006/08/sea-spiders.html Deep-Sea News: Sea Spiders ] ] Most are carnivorous and feed on s, sponges, s and ns. Sea spiders are generally or . They will often insert their proboscis, a long appendage used for digestion and sucking food into its gut, into a and suck out nourishment. The sea anemone, relatively large in comparison to its predator, almost always survives this ordeal. Studies have shown that adult taste preferences depend on what the animals were fed as young.

The class Pycnogonida comprises over approximately 1,300 species, which are normally split into eighty-six genera. The correct taxonomy within the group is uncertain, and it appears that no agreed list of orders exists. Accordingly, families are listed in the taxobox, all considered part of the single order Pantopoda.

Some believe (or once believed) sea spiders to be among the chelicerates, together with s, true s, s, s and s. While sharing many morphological features with the other chelicerates, major differences (such as their unique proboscis) have caused many taxonomists to remove sea spiders from this grouping, and some consider them to form their own subphylum. Another reason for this is that it seems the appendages called chelifores are unique among present arthropods, and are not homologous to the chelicerae in real chelicerates as previously suspected. Instead of developing from the deuterocerebrum, they can be traced to the protocerebrum, the anterior part of the arthropod brain and found in the first head segment that in all other arthropods give rise to the eyes only. This is not found anywhere else among arthropods except in some fossil forms like "", indicating the Pycnogonida may be a sister group to all other living arthropods having evolved from some ancestor that had lost the protocerebrum appendages. If this is confirmed once and for all, it would mean the sea spiders are the last surviving (and highly modified) members of an ancient and long gone stemgroup of arthropods that lived in the old oceans.

Although the fossil record of pycnogonids is scant, it is clear that they once possessed a , but it was later lost, and that the group is very old.

The earliest fossils are known from the 'Orsten' of Sweden, the Herefordshire Lagerstätte of England and the Hunsrück Slate of Germany. Some of these specimens are significant in that they possess a longer 'trunk' behind the abdomen and in two fossils the body ends in a tail; something never seen in living sea spiders.

In 2007 remarkably well-preserved fossils were exposed in fossil beds at La Voulte-sur-Rhone, near in south-eastern France. Researchers from the discovered about 70 fossils from three distinct species in the 160 million-year-old La Voulte . The find will help fill in an enormous gap in the history of these creatures. [http://news.bbc.co.uk/2/hi/science/nature/6948161.stm]