There are three families of ticks, one of which – Nuttalliellidae – comprises a single species, Nuttalliella namaqua. The remaining two families contain the hard ticks (Ixodidae) and the soft ticks (Argasidae).[2][3]

Ixodidae are distinguished from the Argasidae by the presence of a scutum or hard shield. Ixodidae nymphs and adults both have a prominent capitulum (head) which projects forwards from the body; in the Argasidae, conversely, the capitulum is concealed beneath the body.[4]

Argasidae contains 193 species, although the composition of the genera is less certain, and more study is needed before the genera can become stable.[2] The currently accepted genera are Antricola, Argas, Nothaspis, Ornithodoros and Otobius.[2] Though common in North America, they feed rapidly, primarily on birds, and are very rarely found to parasitize land animals or humans.[5]

Nuttalliella namaqua is a tick found in southern Africa from Tanzania to Namibia and South Africa,[6] which is placed in its own family, Nuttalliellidae.[2] It can be distinguished from ixodid ticks and argasid ticks by a combination of characters including the position of the stigmata, lack of setae, strongly corrugated integument, and form of the fenestrated plates.[7]

Fossilized ticks are common. Recent hypotheses based on total-evidence approach analysis place the origin of ticks in the Cretaceous (65 to 146 million years ago) with most of the evolution and dispersal occurring during the Tertiary (5 to 65 million years ago).[8] The oldest example is an argasid (bird) tick from Cretaceous New Jersey amber. The younger Baltic and Dominican ambers have also yielded examples, all of which can be placed in living genera.

Tick species are widely distributed around the world.[9] However, they tend to flourish more in countries with warm, humid climates, because they require a certain amount of moisture in the air in order to undergo metamorphosis, and because low temperatures inhibit their development from egg to larva.[10]

For an ecosystem to support ticks, it must satisfy two requirements: there must be a high enough population density of host species in the area, and there must be high enough humidity for ticks to remain hydrated.[11] Due to their role in transmitting Lyme disease, ixodid ticks, particularly I. scapularis, have been studied using geographic information systems (GIS), in order to develop predictive models for ideal tick habitats. According to these studies, it was determined that certain features of a given micro-climate – such as sandy soil, hardwood trees, rivers, and the presence of deer – are good predictors of dense tick populations.[5]

Ticks, like mites, have bodies which are divided into two primary sections: the anterior capitulum (or gnathosoma), which contains the head and mouthparts; and the posterior idiosoma which contains the legs, digestive tract, and reproductive organs.[11]

Ticks, such as this Ixodes scapularis, climb to the ends of leaves or branches and attach to hosts that brush against them.

Ticks satisfy all of their nutritional requirements on a diet of blood, a practice known as hematophagy. They extract the blood by cutting a hole in the host's epidermis, into which they insert their hypostome, likely keeping the blood from clotting by excreting an anticoagulant.[12]

The legs of Ixodidae and Argasidae are similar in structure. Each leg is composed of six segments: the coxa, trochanter, femur, patella, tibia, and tarsus. Each of these segments are connected by muscles which allow for flexion and extension, however the coxae have limited lateral movement. When not being used for walking, the legs remain tightly folded against the body.[13][14]

In addition to being used for locomotion, the tarsus of leg I contains a unique sensory organ known as the Haller's organ which can detect odors and chemicals emanating from the host, as well as sensing changes in temperature and air currents.[13][14][15]

Both ixodid and argasid ticks undergo three primary stages of development: larval, nymphal, and adult.[16] Ixodid ticks require three hosts, and their life cycle takes at least one year to complete. Up to 3,000 eggs are laid on the ground by an adult female tick. When larvae emerge, they feed primarily on small mammals and birds. After feeding, they detach from their host and molt to nymphs on the ground, which then feed on larger hosts and molt to adults. Female adults attach to larger hosts, feed, and lay eggs, while males feed very little and occupy larger hosts primarily for mating.[5]

Argasid ticks, unlike ixodid ticks, may go through several nymphal stages, requiring a meal of blood each time.[17] Their lifecycle ranges from months to years. The adult female argasid tick can lay anywhere from a few hundred to over a thousand eggs over the course of her lifetime. Larvae feed very quickly and detach to molt to nymphs. Nymphs may go through as many as seven instars, each requiring a blood meal. Both male and female adults blood-feed, and they mate off the host. During feeding, any excess fluid is excreted by the coxal glands, a process which is unique to argasid ticks.[5] 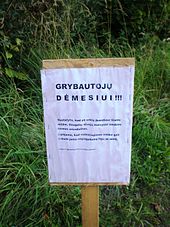 Tick-borne illnesses are caused by infection with a variety of pathogens, including rickettsia and other types of bacteria, viruses, and protozoa. Because ticks can harbor more than one disease-causing agent, patients can be infected with more than one pathogen at the same time, compounding the difficulty in diagnosis and treatment. Major tick-borne diseases include Lyme disease, Rocky Mountain spotted fever, relapsing fever, tularemia, tick-borne meningoencephalitis, Colorado tick fever, Crimean-Congo hemorrhagic fever, babesiosis and cytauxzoonosis. A new find is a bacteria that causes blood clots is candidatus neoehrlichia mikurensis. It mainly affects persons with lowered immune defense and is present in 9% of rodents, and can be cured with antibiotics.[18]

Tick bites may induce an allergy to red meat in some people, due to the allergen galactose alpha-1,3-galactose. Allergic reactions to red meat typically occur in individuals who have had local allergic reactions to ticks. Within six months or so they develop anaphylaxis to red meat which almost invariably occurs several hours after eating red meat. The reactions may rarely be profound, due to the co-existence of an increased number of mast cells (mastocytosis).[19]

Eggs can be infected with pathogens inside of the ovaries, meaning that baby ticks can be infectious immediately at birth, before feeding on their first host.[17] 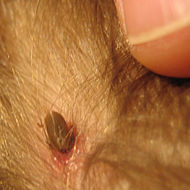 Engorged tick attached to back of toddler's head. Adult thumb shown for scale.

In general, the best way to remove adult Ixodidae is mechanically. If the tick's head and mouthparts are not attached to the body after removal, it may be necessary to perform a punch biopsy to remove any parts remaining inside the patient.[20]

With the possible exception of widespread DDT use in the Soviet Union, attempts to limit the population or distribution of disease-causing ticks have been very unsuccessful.[21]

The parasitic Ichneumon wasp Ixodiphagus hookeri has long been investigated for its potential to control tick populations. It lays its eggs into ticks; the hatching wasps kill their host.

Another natural form of control for ticks is the guineafowl, a bird species which consumes mass quantities of ticks.[22] Just 2 birds can clear 2 acres (8,100 m2) in a single year.

Topical (drops/dust) flea/tick medicines may be toxic to animals and humans. Phenothrin (85.7%) in combination with Methoprene was a popular topical flea/tick therapy for felines. Phenothrin kills adult fleas and ticks. Methoprene is an insect growth regulator that interrupts the insect's life cycle by killing the eggs. However, the U.S. Environmental Protection Agency required at least one manufacturer of these products to withdraw some products and include strong cautionary statements on others, warning of adverse reactions.[23]

The black legged or deer tick (Ixodes scapularis) is dependent on the white-tailed deer for reproduction. Larval and nymph stages (immature ticks that cannot reproduce) of the deer tick feed on birds and small mammals. The adult female tick needs a large 3-day blood meal from the deer before she can reproduce and lay her 2000 or more eggs. Deer are the primary host for the adult deer tick and are key to the reproductive success of the tick.[24]

Numerous studies have shown that abundance and distribution of deer ticks are correlated with deer densities.[24][25][26][27]

A 2006 study by Penn State's Center for Infectious Disease Dynamics indicated that reducing the deer population in small areas may lead to higher tick densities, resulting in more tick-borne infections in rodents leading to a high prevalence of tick-borne encephalitis and creating a tick hot-spot.[29]