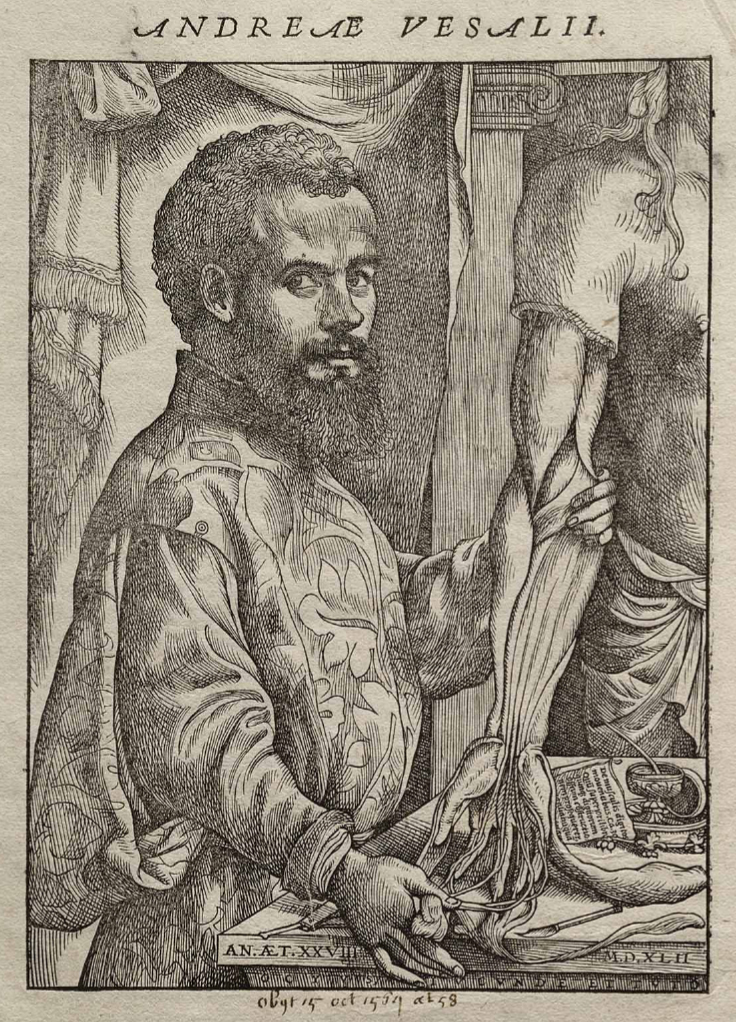 Andreas Vesalius (, , - , , ) was an anatomist, , and author of one of the most influential books on , "" ("On the Workings of the Human Body"). Vesalius is often referred to as the founder of modern human anatomy.

Vesalius is the latinized form of Andreas van Wesel. He is sometimes also referred to as Andreas Vesal.

Vesalius was born in , then in the , to a family of physicians. His great-grandfather, Jan van Wesel, probably born in , received his medical degree from the and taught medicine in 1428 at the then newly founded University of Leuven. His grandfather, Everard van Wesel, was the Royal Physician of Emperor Maximilian, while his father, Andries van Wesel, went on to serve as to Maximillian, and later a to his successor Charles V. Andries encouraged his son to continue in the family tradition, and enrolled him in the in Brussels to learn Greek and according to standards of the era.

In 1528 Vesalius entered the University of Louvain ("Pedagogium Castrensis") taking arts, but when his father was appointed as the Valet de Chambre in 1532, he decided to pursue a career in medicine at the , where he moved in 1533. Here he studied the theories of under the auspices of (Jacobus Sylvius) and . It was during this time that he developed his interest in anatomy, and was often found examining bones at the Cemetery of the Innocents.

He was forced to leave Paris in 1536 due to the opening of hostilities between the Holy Roman Empire and France, and returned to . Here he completed his studies under and graduated the next year. His thesis, "Paraphrasis in nonum librum Rhazae medici arabis clariss ad regem Almansorum de affectum singularum corporis partium curatione", was a commentary on the ninth book of . He remained at Leuven only briefly before leaving after a dispute with his professor. After settling briefly in in 1536, he moved to the ("Universitas aristarum") to study for his doctorate, which he received in 1537.

On graduation he was immediately offered the chair of Surgery and Anatomy ("explicator chirurgiae") at Padua. He also guest lectured at Bologna and Pisa. Previously these topics had been taught primarily from reading classic texts, mainly , followed by an animal dissection by a barber-surgeon whose work was directed by the lecturer. No attempt was made to actually check Galen's claims; these were considered unassailable. Vesalius, on the other hand, carried out dissection as the primary teaching tool, handling the actual work himself while his students clustered around the table. Hands-on direct observation was considered the only reliable resource, a huge break with medieval practice.

He kept meticulous drawings of his work for his students in the form of six large illustrated anatomical tables. When he found that some of these were being widely copied, he published them all in 1538 under the title "Tabulae Anatomicae Sex". He followed this in 1539 with an updated version of Galen's anatomical handbook, "Institutiones Anatomicae". When this reached Paris one of his former professors published an attack on this version.

In 1538 he also published a letter on , or . This was a popular treatment for almost any illness, but there was some debate about where to take the blood from. The classical Greek procedure, advocated by Galen, was to let blood from a site near the location of the illness. However, the Muslim and medieval practice was to draw a smaller amount blood from a distant location. Vesalius' pamphlet supported Galen's view, and supported his arguments through anatomical diagrams.

In 1539 a Paduan judge became interested in Vesalius' work, and made bodies of executed criminals available for dissection. He soon built up a wealth of detailed anatomical diagrams, the first accurate set to be produced. Many of these were produced by commissioned artists, and were therefore of much better quality than those produced previously.

In 1541, while in Bologna, Vesalius uncovered the fact that all of Galen's research had been based upon animal anatomy rather than the human; since dissection had been banned in ancient Rome, Galen had dissected s instead, and argued that they would be anatomically similar to humans. As a result, he published a correction of Galen's "Opera omnia" and began writing his own anatomical text. Until Vesalius pointed this out, it had gone unnoticed and had long been the basis of studying human anatomy. However, some people still chose to follow Galen and resented Vesalius for calling attention to such glaring mistakes.

Vesalius, undeterred, went on to stir up more controversy, this time disproving not just Galen but also and even ; all three had made assumptions about the functions and structure of the heart that were clearly wrong. For instance, Vesalius noted that the heart had four chambers, the liver two lobes, and that the blood vessels originated in the heart, not the liver. Other famous examples of Vesalius disproving Galen in particular was his discovery that the lower jaw was only one bone, not two (which Galen had assumed from animal dissection) and his proof that blood did not pass through the .

In 1543, Vesalius conducted a public dissection of the body of , a notorious felon from the city of , . With the cooperation of the surgeon , he assembled the bones and finally donated the to the . This preparation (“The Basel Skeleton”) is Vesalius’ only well-preserved skeletal preparation today, and is also the world’s oldest anatomical preparation. It is still displayed at the Anatomical Museum of the . [http://www.vhsbb.ch/asp/pdf/senuni_07021213_zf_kurz.pdf]

In 1543, Vesalius asked to help publish the seven-volume "" ("On the fabric of the human body"), a groundbreaking work of he dedicated to Charles V and which most believe was illustrated by 's pupil Jan Stephen van Calcar. A few weeks later he published an abridged edition for students, "Andrea Vesalii suorum de humani corporis fabrica librorum epitome", and dedicated it to , son of the Emperor.

The work emphasized the priority of dissection and what has come to be called the "anatomical" view of the body &mdash; seeing human internal functioning as an essentially corporeal structure filled with organs arranged in three-dimensional space. This was in stark contrast to many of the anatomical models used previously, which had strong Galenic/Aristotelean elements, as well as elements of . Although modern anatomical texts had been published by Mondino and Berenger, much of their work was clouded by their reverence for Galen and Arabian doctrines.

Besides the first good description of the , he showed that the consists of three portions and the of five or six; and described accurately the vestibule in the interior of the temporal bone. He not only verified the observation of Etienne on the valves of the hepatic veins, but he described the , and discovered the canal which passes in the fetus between the umbilical vein and the vena cava, since named . He described the , and its connections with the stomach, the and the colon; gave the first correct views of the structure of the ; observed the small size of the caecal appendix in man; gave the first good account of the and and the fullest description of the anatomy of the brain yet advanced. He did not understand the inferior recesses; and his account of the nerves is confused by regarding the optic as the first pair, the third as the fifth and the fifth as the seventh.

In this work, Vesalius also becomes the first person to describe .

Though Vesalius' work was not the first such work based on actual autopsy, nor even the first work of this era, the production values, highly-detailed and intricate plates, and the fact that the artists who produced it were clearly present at the dissections themselves made it into an instant classic. Pirated editions were available almost immediately, a fact Vesalius acknowledged would happen in a printer's note. Vesalius was only 30 years old when the first edition of "Fabrica" was published.

*"When I undertake the dissection of a human cadaver I pass a stout rope tied like a noose beneath the lower jaw and through the zygomas up to the top of the head... The lower end of the noose I run through a pulley fixed to a beam in the room so that I may raise or lower the cadaver as it hangs there or turn around in any direction to suit my purpose; ... You must take care not to put the noose around the neck, unless some of the muscles connected to the occipital bone have already been cut away. ..." [Andreas Vesalius, "" (1543) Book II Ch. 24, 268. Trans. William Frank Richardson, "On the Fabric of the Human Body" (1999) Book II, 234. As quoted by W.F. Bynum & Roy Porter (2005), "Oxford Dictionary of Scientific Quotations" "Andreas Vesalius", 595:2 ISBN 0-19-858409-1] --Andreas Vesalius, 595:2 of Bynum & Porter, "Oxford Dictionary of Scientific Quotations" 2005

Soon after publication, Vesalius was invited as Imperial physician to the court of Emperor Charles V. He informed the Venetian Senate that he was leaving his post in Padua, which prompted Duke Cosimo I de' Medici to invite him to move to the expanding university in Pisa, which he turned down. Vesalius took up a position in the court, where he had to deal with the other physicians mocking him as being a barber.

Over the next twelve years Vesalius travelled with the court, treating injuries from battle or tournaments, performing surgeries and postmortems, and writing private letters addressing specific medical questions. During these years he also wrote "Radicis Chynae", a short text on the properties of a medical plant, whose use he defended, as well as defense for his anatomical findings. This elicited a new round of attacks on his work that called for him to be punished by the emperor. In 1551, Charles V commissioned an inquiry in to investigate the religious implications of his methods. Vesalius' work was cleared by the board, but the attacks continued. Four years later one of his main detractors published an article that claimed that the human body itself had changed since Galen had studied it.

After the abdication of Charles he continued at court in great favour with his son Philip II, who rewarded him with a pension for life and by being made a count palatine. In 1555 he published a revised edition of "De Corporis".

In 1564 Vesalius went on a pilgrimage to the Holy Land. He sailed with the Venetian fleet under via . When he reached , he received a message from the Venetian senate requesting him again to accept the Paduan professorship, which had become vacant by the death of his friend and pupil Fallopius.

After struggling for many days with the adverse winds in the , he was wrecked on the island of . Here he soon died in such debt that, if a benefactor had not paid for a funeral, his remains would have been thrown to the animals. At the time of his death he was scarcely fifty years of age.

For many years it was assumed that Vesalius's pilgrimage was due to pressures of the . Today this is generally considered to be without foundation (see C.D. O'Malley "Andreas Vesalius' Pilgrimage", Isis 45:2, 1954) and is dismissed by modern biographers. It appears the story was spread by , who served as de Saxe under Charles V and then the prince of Orange. He claimed in 1565 that Vesalius was performing an autopsy on an aristocrat in Spain when it was found that the heart was still beating, leading to the Inquisition condemning him to death. The story went on to claim that Philip II had the sentence transformed into a pilgrimage. The story re-surfaced several times over the next few years, living on until recent times.