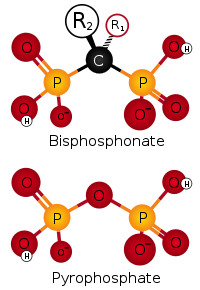 Basic structure of a bisphosphonate on top. To compare the structure of pyrophosphate below. Note the similarity in structure.

Bisphosphonates (also called diphosphonates) are a class of drugs that prevent the loss of bone mass, used to treat osteoporosis and similar diseases. They are called bisphosphonates because they have two phosphonate (PO3) groups and are similar in structure to pyrophosphate.

Evidence shows that they reduce the risk of osteoporotic fracture in those who have had previous fractures however do not reduce fracture risk in those with osteoporosis who have not previously had a fracture.[1][2]

The uses of bisphosphonates include the prevention and treatment of osteoporosis, osteitis deformans ("Paget's disease of bone"), bone metastasis (with or without hypercalcaemia), multiple myeloma, primary hyperparathyroidism, osteogenesis imperfecta, and other conditions that feature bone fragility.

Doctors use bisphosphonates to treat osteoporosis, osteitis deformans (Paget's disease of the bone), bone metastasis (with or without hypercalcaemia), multiple myeloma, and other conditions involving fragile, breakable bone. In osteoporosis and Paget's, the most popular first-line bisphosphonate drugs are alendronate (Merck) and risedronate. If these are ineffective or if the patient develops digestive tract problems, intravenous pamidronate (Novartis) may be used. Strontium ranelate or teriparatide (Eli Lilly) are used for refractory disease; and in postmenopausal women, the SERM raloxifene (Eli Lilly) is occasionally administered instead of bisphosphonates.

Other bisphosphonates, including medronate (R1, R2 = H) and oxidronate (R1 = H, R2 = OH), are mixed with radioactive technetium and injected, as a way to image bone and detect bone disease. Bisphosphonates have been used to reduce fracture rates in children with the disease osteogenesis imperfecta[5], to treat otosclerosis.[6], and by crew members on long-duration missions on the International Space Station to minimize bone loss.

Oral bisphosphonates can cause upset stomach and inflammation and erosions of the esophagus, which is the main problem of oral N-containing preparations. This can be prevented by remaining seated upright for 30 to 60 minutes after taking the medication. Intravenous bisphosphonates can give fever and flu-like symptoms after the first infusion, which is thought to occur because of their potential to activate human γδ T cells. These symptoms do not recur with subsequent infusions.[citation needed]

Bisphosphonates have been associated with osteonecrosis of the jaw (ONJ), with the mandible twice as frequently affected as the maxilla and most cases occurring following high-dose intravenous administration used for some cancer patients. Some 60% of cases are preceded by a dental surgical procedure (that involve the bone), and it has been suggested that bisphosphonate treatment should be postponed until after any dental work to eliminate potential sites of infection (the use of antibiotics may otherwise be indicated prior to any surgery).[7]

A number of cases of severe bone, joint, or musculoskeletal pain have been reported, prompting labeling changes[8] Matrix metalloproteinase 2 may be a candidate gene for bisphosphonate-associated osteonecrosis of the jaw, since it is the only gene known to be associated with bone abnormalities and atrial fibrillation, both of which are side-effects of bisphosphonates. [9]

In large studies, women taking bisphosphonates for osteoporosis have had unusual fractures in the femur (thigh bone) in the shaft (diaphysis or sub-trochanteric region) of the bone, rather than at the head of the bone, which is the most common site of fracture. However, these unusual fractures are extremely rare (12 in 14,195 women) compared to the common hip fractures (272 in 14,195 women), and the overall reduction in hip fractures caused by bisphosphonate far outweighed the unusual shaft fractures.[15] There were concerns that long-term bisphosphonate use can result in over-suppression of bone turnover. It is hypothesized that micro-cracks in the bone are unable to heal and eventually unite and propagate, resulting in atypical fractures. Such fractures tend to heal poorly and often require some form of bone stimulation, for example bone grafting as a secondary procedure. This complication is not common, and the benefit of overall fracture reduction still holds.[16][15]

The two PO3 (phosphonate) groups covalently linked to carbon determine both the name "bisphosphonate" and the function of the drugs.

Of the bisphosphonate that is resorbed (from oral preparation) or infused (for intravenous drugs), about 50% is excreted unchanged by the kidney. The remainder has a very high affinity for bone tissue, and is rapidly adsorbed onto the bone surface.

Bisphosphonate-based drugs' specificity comes from the two phosphonate groups (and possibly a hydroxyl at R1) that work together to coordinate calcium ions. Bisphosphonate molecules preferentially "stick" to calcium and bind to it. The largest store of calcium in the human body is in bones, so bisphosphonates accumulate to a high concentration only in bones.

Bisphosphonates, when attached to bone tissue, are "ingested" by osteoclasts, the bone cells that break down bone tissue.

The non-nitrogenous bisphosphonates(disphosphonates) are metabolised in the cell to compounds that replace the terminal pyrophosphate moiety of ATP, forming a nonfunctional molecule that competes with adenosine triphosphate (ATP) in the cellular energy metabolism. The osteoclast initiates apoptosis and dies, leading to an overall decrease in the breakdown of bone.[19] 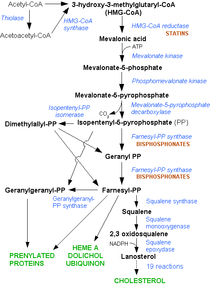 Disruption of the HMG CoA-reductase pathway at the level of FPPS prevents the formation of two metabolites (farnesol and geranylgeraniol) that are essential for connecting some small proteins to the cell membrane. This phenomenon is known as prenylation, and is important for proper sub-cellular protein trafficking (see "lipid-anchored protein" for the principles of this phenomenon).[21]

While inhibition of protein prenylation may affect many proteins found in an osteoclast, disruption to the lipid modification of Ras, Rho, Rac proteins has been speculated to underlie the effects of bisphosphonates. These proteins can affect both osteoclastogenesis, cell survival, and cytoskeletal dynamics. In particular, the cytoskeleton is vital for maintaining the "ruffled border" that is required for contact between a resorbing osteoclast and a bone surface.

Statins are another class of drugs that inhibit the HMG-CoA reductase pathway. Unlike bisphosphonates, statins do not bind to bone surfaces with high affinity, and are, thus, not specific for bone. Nevertheless, some studies have reported a decreased rate of fracture (an indicator of osteoporosis) and/or an increased bone mineral density in statin users. The overall efficacy of statins in the treatment osteoporosis remains controversial.

Bisphosphonates were developed in the 19th century but were first investigated in the 1960s for use in disorders of bone metabolism. Their non-medical use was to soften water in irrigation systems used in orange groves. The initial rationale for their use in humans was their potential in preventing the dissolution of hydroxylapatite, the principal bone mineral, thus arresting bone loss. Only in the 1990s was their actual mechanism of action demonstrated with the initial launch of Fosamax (alendronate) by Merck.[22]