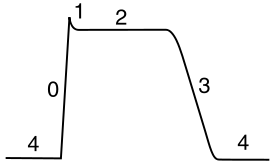 Antiarrhythmic agents are a group of pharmaceuticals that are used to suppress abnormal rhythms of the heart (cardiac arrhythmias), such as atrial fibrillation, atrial flutter, ventricular tachycardia, and ventricular fibrillation.

The Singh Vaughan Williams classification, introduced in 1970 based on the seminal work of Bramah N. Singh in his doctoral thesis at Oxford where Vaughan Williams was his advisor and on subsequent work by Singh and his colleagues in the United States, is one of the most widely used classification schemes for antiarrhythmic agents. This scheme classifies a drug based on the primary mechanism of its antiarrhythmic effect. However, its dependence on primary mechanism is one of the limitations of the Singh-VW classification, since many antiarrhythmic agents have multiple action mechanisms. Amiodarone, for example, has effects consistent with all of the first four classes. Another limitation is the lack of consideration within the Singh-VW classification system for the effects of drug metabolites. Procainamide—a class Ia agent whose metabolite N-acetyl procainamide (NAPA) has a class III action—is one such example. A historical limitation was that drugs such as digoxin and adenosine – important antiarrhythmic agents – had no place at all in the VW classification system. This has since been rectified by the inclusion of class V.[citation needed]

There are five main classes in the Singh Vaughan Williams classification of antiarrhythmic agents:

Class I agents are called Membrane Stabilizing agents. The 'stabilizing' is the word used to describe the decrease of excitogenicity of the plasma membrane which is brought about by these agents. (Also noteworthy is that a few class II agents like propranolol also have a membrane stabilizing effect.)

Class I agents are divided into three groups (Ia, Ib and Ic) based upon their effect on the length of the action potential.[3][4]

Class II agents are conventional beta blockers. They act by blocking the effects of catecholamines at the β1-adrenergic receptors, thereby decreasing sympathetic activity on the heart. These agents are particularly useful in the treatment of supraventricular tachycardias. They decrease conduction through the AV node.

Class III agents predominantly block the potassium channels, thereby prolonging repolarization.[5] Since these agents do not affect the sodium channel, conduction velocity is not decreased. The prolongation of the action potential duration and refractory period, combined with the maintenance of normal conduction velocity, prevent re-entrant arrhythmias. (The re-entrant rhythm is less likely to interact with tissue that has become refractory). Drugs include: amiodarone, ibutilide, sotalol, dofetilide, and dronedarone.

Class IV agents are slow calcium channel blockers. They decrease conduction through the AV node, and shorten phase two (the plateau) of the cardiac action potential. They thus reduce the contractility of the heart, so may be inappropriate in heart failure. However, in contrast to beta blockers, they allow the body to retain adrenergic control of heart rate and contractility.

Since the development of the original Vaughan-Williams classification system, additional agents have been used that don't fit cleanly into categories I through IV.

Some sources use the term "Class V".[6] However, they are more frequently identified by their precise mechanism.

Another approach, known as the "Sicilian Gambit", placed a greater approach on the underlying mechanism.[11][12][13]

It presents the drugs on two axes, instead of one, and is presented in tabular form. On the Y axis, each drug is listed, in approximately the Vaughan Williams order. On the X axis, the channels, receptors, pumps, and clinical effects are listed for each drug, with the results listed in a grid. It is therefore not a true classification in that it does not aggregate drugs into categories.[14]