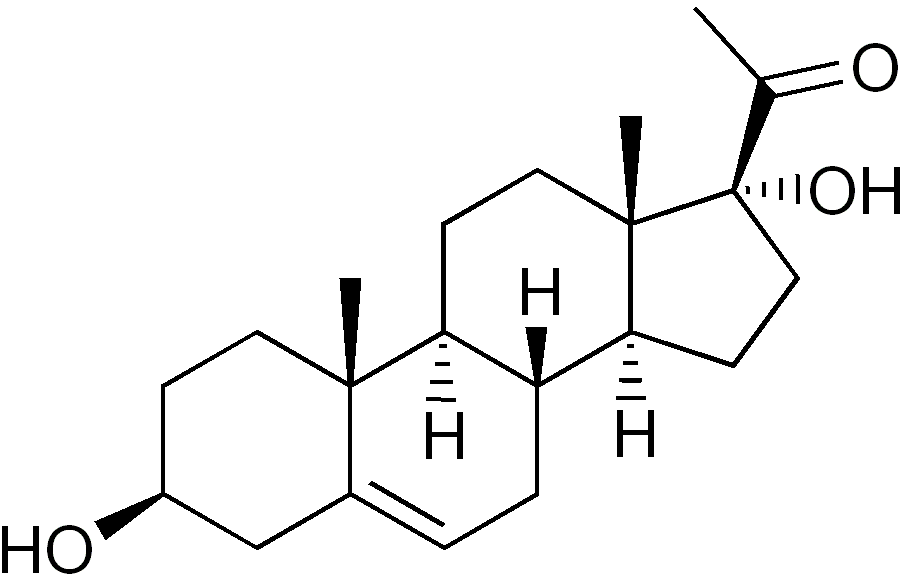 17-OH-pregnenolone is considered a in the formation of (DHEA), itself a prohomone of the s.

This conversion is mediated by the enzyme 17,20 lyase . As such 17-OH-pregenolone represents an intermediary in the delta-5-pathway that leads from pregnenolone to DHEA. 17-hydroxypregneolone is also converted to , a prohomone for s and through the activity of 3-hydroxysteroid dehydrogenase.

There is some evidence that 17-OH-pregnenolone may have activity as a . [Matsunaga M, Ukena K, Baulieu EE, Tsutsui K7alpha-Hydroxypregnenolone acts as a neuronal activator to stimulate locomotor activity of breeding newts by means of the dopaminergic system. Proc Natl Acad Sci USA 2004 Dec 7;101(49):17282-7. PMID 15569930]

Measurements of 17-OH-pregnenolone are useful in the diagnosis of certain forms of . [Riepe FG, Mahler P, Sippell, Partsch CJ. Longitudinal Study of Plasma Pregnenolone and 17-Hydroxypregnenolone in Full-Term and Preterm Neonates at Birth and during the Early Neonatal Period. The Journal of Clinical Endocrinology & Metabolism (2002) 87: 4301-4306 [http://jcem.endojournals.org/cgi/content/full/87/9/4301] ] In patients with 17-OH-pregnenolone is increased, while in patients with levels are low to absent.