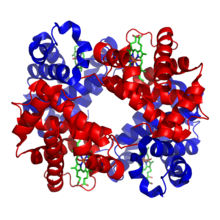 The mean corpuscular hemoglobin concentration, or MCHC, is a measure of the concentration of hemoglobin in a given volume of packed red blood cells. It is reported as part of a standard complete blood count.

It is calculated by dividing the hemoglobin by the hematocrit. Reference ranges for blood tests are 32 to 36 g/dl,[1] or between 4.9 [2] to 5.5[2] mmol/L. It is thus a mass or molar concentration. Still, many instances[3][4] measure MCHC in percentage (%), as if it was a mass fraction (mHb / mRBC). Numerically, however, the MCHC in g/dl and the mass fraction of hemoglobin in red blood cells in % are identical, assuming a RBC density of 1g/mL and negligible hemoglobin in plasma.

This count is used to give a rough guide to what shade of red, RBC will be. (paler=lower than the standard)

Because of the way automated analysers count blood cells, a very high MCHC (greater than about 370 g/L) may indicate the blood is from someone with a cold agglutinin. This means that when their blood gets colder than 37°C it starts to clump together. As a result, the analyzer may incorrectly report a low number of very dense red blood cells for blood samples in which agglutination has occurred.

This problem is usually picked up by the laboratory before the result is reported. The blood is warmed until the cells separate from each other, and quickly put through the machine while still warm.This is the most sensitive test for iron deficiency anemia.