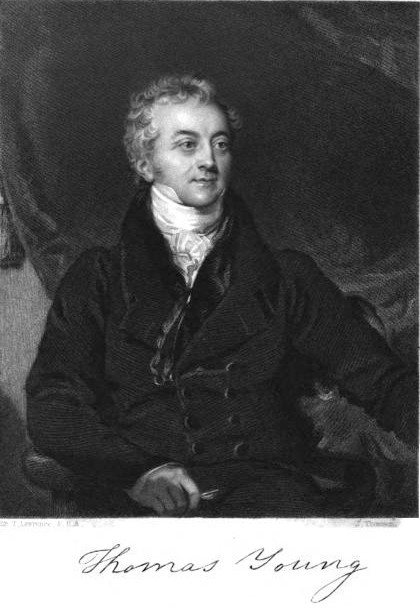 Young belonged to a family of Milverton, , where he was born in 1773, the eldest of ten children. At the age of fourteen Young had learned Greek and and was acquainted with French, Italian, Hebrew, Chaldean, Syriac, Samaritan, Arabic, Persian, Turkish and Amharic. [cite book | author=Singh, Simon | title=The Code Book: The Science of Secrecy from Ancient Egypt to Quantum Cryptography | publisher=Anchor | year=2000 | id=ISBN 0-385-49532-3]

Young began to study medicine in in 1792, moved to in 1794, and a year later went to , , where he obtained the degree of doctor of in 1796. In 1797 he entered . In the same year he inherited the estate of his grand-uncle, , which made him financially independent, and in 1799 he established himself as a physician at 48 , (now recorded with a ). Young published many of his first academic articles anonymously to protect his reputation as a physician.

In 1801 Young was appointed professor of (mainly ) at the . In two years he delivered 91 lectures. In 1802, he was appointed foreign secretary of the , of which he had been elected a fellow in 1794. He resigned his professorship in 1803, fearing that its duties would interfere with his medical practice. His lectures were published in 1807 in the "Course of Lectures on Natural Philosophy" and contain a number of anticipations of later theories.

In 1811 Young became physician to , and in 1814 he served on a committee appointed to consider the dangers involved in the general introduction of gas into . In 1816 he was secretary of a commission charged with ascertaining the length of the second's , and in 1818 he became secretary to the and superintendent of the .

Thomas Young died in on 10 May 1829, and was buried in the cemetery of St. Giles Church in Farnborough, , .

Later scholars and scientists have praised Young's work although they may know him only through achievements he made in their fields. His contemporary Sir called him a "truly original genius". praised him in the 1931 foreword to an edition of Newton's "Opticks". Other admirers include physicist and Nobel laureate .

In Young's own judgement, of his many achievements the most important was to establish the . To do so, he had to overcome the century-old view, expressed in the venerable Isaac Newton's "Optics", that light is a particle. Nevertheless, in the early 1800s Young put forth a number of theoretical reasons supporting the wave theory of light, and he developed two enduring demonstrations to support this viewpoint. With the he demonstrated the idea of in the context of water waves. With the two-slit, or , he demonstrated interference in the context of light as a wave. In a paper entitled "Experiments and Calculations Relative to Physical Optics", published in 1803, Young describes an experiment in which he placed a narrow card (approx. 1/30th in.) in a of from a single opening in a window and observed the fringes of color in the shadow and to the sides of the card. He observed that placing another card before or after the narrow strip so as to prevent light from the beam from striking one of its edges caused the fringes to disappear. [cite book|last=Magie|first=William Francis|title=A Source Book in Physics|publisher=Harvard University Press|year=1935 p. 309] This supported the contention that light is composed of s. [Of course, both Young and Newton were eventually shown to be partially correct, as neither wave nor particle explanations alone can explain the behavior of light. See e.g. http://www.molphys.leidenuniv.nl/monos/smo/index.html?basics/light.htm.] Young performed and analyzed a number of experiments, including interference of light from reflection off nearby pairs of micrometer grooves, from reflection off thin films of soap and oil, and from . He also performed two important diffraction experiments using fibers and long narrow strips. In his "Course of Lectures on Natural Philosophy and the Mechanical Arts" (1807) he gives Grimaldi credit for first observing the fringes in the shadow of an object placed in a beam of light. Within ten years, much of Young's work was reproduced and then extended by . ( in "Everything's Relative and Other Fables from Science and Technology" argues that there is no clear evidence that Young actually did the two-slit experiment. "See also Newton ".)

Young described the characterization of elasticity that came to be known as , denoted as "E", in 1807, and further described it in his subsequent works such as his 1845 "Course of Lectures on Natural Philosophy and the Mechanical Arts". [cite book | title = Course of Lectures on Natural Philosophy and the Mechanical Arts | author = Young, Thomas | url = http://books.google.com/books?id=fGMSAAAAIAAJ&pg=RA1-PA106&dq=modulus+inauthor:thomas+inauthor:young&as_brr=1&ei=pL_ZRrnbL5aipwLBuNySCw#PPA1,M1 | year = 1845 | publisher = London: Taylor and Walton] However, the idea can be traced back to a paper by published in 1727, eighty years before Thomas Young's 1807 paper. The first use of the concept of Young's modulus in experiments was by in 1782 – predating Young by 25 years. [cite book | author = Truesdell, Clifford A.| year = 1960 | title = The Rational Mechanics of Flexible or Elastic Bodies, 1638-1788: Introduction to Leonhardi Euleri Opera Omnia, vol. X and XI, Seriei Secundae | publisher = Orell Fussli]

The Young's modulus relates the stress (pressure) in a body to its associated strain (change in length as a ratio of the original length); that is, stress = "E" &times; strain, for a uniaxially loaded specimen. Young's modulus is independent of the component under investigation; that is, it is an inherent material property (the term modulus refers to an inherent material property). Young's Modulus allowed, for the first time, prediction of the strain in a component subject to a known stress (and vice versa). Prior to Young's contribution, engineers were required to apply Hooke's F = kx relationship to identify the deformation (x) of a body subject to a known load (F), where the constant (k) is a function of both the geometry and material under consideration. Finding k required physical testing for any new component, as the F = kx relationship is a function of both geometry and material. Young's Modulus depends only on the material, not its geometry, thus allowing a revolution in engineering strategies.

Young has also been called the founder of . In 1793 he explained the mode in which the eye accommodates itself to vision at different distances as depending on change of the curvature of the crystalline lens; in 1801 he was the first to describe ; and in his Lectures he presented the hypothesis, afterwards developed by , that colour perception depends on the presence in the retina of three kinds of nerve fibres which respond respectively to red, green and violet light. This theory was experimentally proven in 1959.

In 1804 Thomas Young (Essay on the "Cohesion of Fluids", "Phil. Trans"., 1805, p. 65) founded the theory of capillary phenomena on the principle of . He also observed the constancy of the angle of contact of a liquid surface with a solid, and showed how from these two principles to deduce the phenomena of capillary action.

The is the formula for capillary action independently discovered by Laplace in 1805.

In Young made an important contribution to in the Croonian lecture for 1808 on the "Functions of the Heart and Arteries," and his medical writings included "An Introduction to Medical Literature", including a "System of Practical Nosology" (1813) and "A Practical and Historical Treatise on Consumptive Diseases" (1815).

Young devised a rule of thumb for determining a child’s drug dosage. Young’s Rule states that the child dosage is equal to the adult dosage multiplied by the child’s age in years, divided by the sum of 12 plus the child’s age.

In his "Encyclopaedia Britannica" article "Languages", Young compared the grammar and vocabulary of 400 languages [cite book | author=Robinson, Andrew | title=The Last Man Who Knew Everything: Thomas Young, the Anonymous Genius who Proved Newton Wrong and Deciphered the Rosetta Stone, among Other Surprising Feats | publisher=Penguin | year=2007 | id=ISBN 0131343041] . In a separate work in 1813, he introduced the term , 165 years after the Dutch linguist and scholar made such a proposal in 1647.

Young was also one of the first who tried to decipher , with the help of a demotic alphabet of 29 letters built up by in 1802 (15 turned out to be correct and Åkerblad and Young wrongly believed that demotic was entirely phonetic or alphabetic). By 1814 Young had completely translated the "enchorial" (demotic, in modern terms) text of the (he had a list with 86 demotic words), and then studied the hieroglyphic alphabet but failed to recognise that the demotic and hieroglyphic texts were paraphrases and not simple translations. In 1823 he published an "Account of the Recent Discoveries in Hieroglyphic Literature and Egyptian Antiquities". Some of Young's conclusions appeared in the famous article "Egypt" he wrote for the 1818 edition of the "Encyclopædia Britannica."

When the French linguist in 1822 published his translation of the hieroglyphs and the key to the grammatical system, Young (and alla others) praised this work but Young also stated that Champollion had based his system on his articles and tried to have his part recognized. The truth was that Young had correctly found the sound value of just six signs and had not found the backbone of the grammar at all, following his own wrong theories.Fact|date=August 2008 Thus Champollion was unwilling to share the credit. In the forthcoming schism, strongly motivated by the political tensions of that time, the British supported Young and the French Champollion. Champollion, whose complete understanding of the hieroglyphic grammar showed the mistakes made by Young, maintained that he alone had deciphered the hieroglyphs. However, after 1826, he did offer Young access to demotic manuscripts in the , when he was a curator there.

He developed , a method of tuning musical instruments.

*- The link is to a pdf version of the paper.