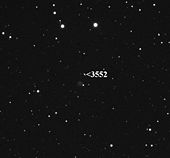 Extinct comets are comets that have expelled most of their volatile ice and have little left to form a tail or coma. The volatile material contained in the comet nucleus evaporates away, and all that remains is inert rock or rubble that can resemble an asteroid. Comets may go through a transition phase as they come close to extinction. A comet may be dormant rather than extinct, if its volatile component is sealed beneath an inactive surface layer.

The eccentric (0.66) comet-like orbit of Hypnos.

Extinct comets are those that have expelled most of their volatile ice and have little left to form a tail or coma. Over time, most of the volatile material contained in a comet nucleus evaporates away, and the comet becomes a small, dark, inert lump of rock or rubble[1] that can resemble an asteroid.[2]

Other related types of comet include transition comets, that are close to becoming extinct, such as were looked for in the Hubble search for transition comets.[3] Comets such as C/2001 OG108 (LONEOS) may represent the transition between typical Halley Family/long period comets and extinct comets.[4] Damocloid asteroids have been studied as possible extinct cometary candidates due to the similarity of their orbital parameters with those of Halley Family comets.[4]

Dormant comets are those within which volatiles may be sealed, but which have inactive surfaces. For example, 14827 Hypnos may be the nucleus of an extinct comet that is covered by a crust several centimeters thick that prevents any remaining volatiles from outgassing.[5]

The term dormant comet is also used to describe comets that may become active but are not actively outgassing. For example 60558 Echeclus has displayed a cometary coma and now also has the cometary designation 174P/Echeclus. After passing perihelion in early 2008, centaur 52872 Okyrhoe significantly brightened.[6]

The distinction between comets and asteroids

When discovered, asteroids were seen as a class of objects distinct from comets, and there was no unified term for the two until "Small Solar System body" was coined in 2006 by the IAU. The main difference between an asteroid and a comet is that a comet shows a coma due to sublimation of near surface ices by solar radiation. A few objects have ended up being dual-listed because they were first classified as minor planets but later showed evidence of cometary activity. Conversely, some (perhaps all) comets are eventually depleted of their surface volatile ices and become asteroids. A further distinction is that comets typically have more eccentric orbits than most asteroids; most "asteroids" with notably eccentric orbits are probably dormant or extinct comets. Also, they are theorized to be common objects amongst the celestial bodies orbiting close to the Sun.[7]

Roughly six percent of the near-earth asteroids are thought to be extinct nuclei of comets which no longer experience outgassing.[5][8][9] 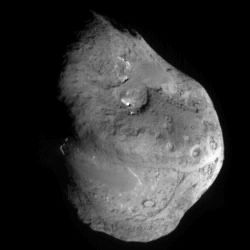 Suspected or theorized extinct comets include: