Quartz crystal. The individual grains of this polycrystalline mineral sample are clearly visible.

A crystal or crystalline solid is a solid material whose constituent atoms, molecules, or ions are arranged in an orderly repeating pattern extending in all three spatial dimensions. The scientific study of crystals and crystal formation is known as crystallography. The process of crystal formation via mechanisms of crystal growth is called crystallization or solidification. The word crystal is derived from the Ancient Greek word κρύσταλλος (krustallos), meaning both “ice” and “rock crystal”,[1] from κρύος (kruos), “icy cold, frost”.[2][3]

Microscopic structure of a halite crystal. (Purple is sodium ion, green is chlorine ion.) There is cubic symmetry in the atoms' arrangement. 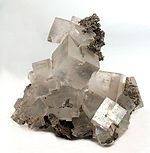 Macroscopic (~10cm) halite crystal cluster. The right-angles between crystal faces are due to the cubic symmetry of the atoms' arrangement.
Main article: Crystal structure

The process of forming a crystalline structure from a fluid or from materials dissolved in the fluid is often referred to as the crystallization process. In the old example referenced by the root meaning of the word crystal, water being cooled undergoes a phase change from liquid to solid beginning with small ice crystals that grow until they fuse, forming a polycrystalline structure. The physical properties of the ice depend on the size and arrangement of the individual crystals, or grains, and the same may be said of metals solidifying from a molten state.

Which crystal structure the fluid will form depends on the chemistry of the fluid, the conditions under which it is being solidified, and also on the ambient pressure. While the cooling process usually results in the generation of a crystalline material, under certain conditions, the fluid may be frozen in a noncrystalline state. In most cases, this involves cooling the fluid so rapidly that atoms cannot travel to their lattice sites before they lose mobility. A noncrystalline material, which has no long-range order, is called an amorphous, vitreous, or glassy material. It is also often referred to as an amorphous solid, although there are distinct differences between crystalline solids and amorphous solids: most notably, the process of forming a glass does not release the latent heat of fusion.

Crystalline structures occur in all classes of materials, with all types of chemical bonds. Almost all metal exists in a polycrystalline state; amorphous or single-crystal metals must be produced synthetically, often with great difficulty. Ionically bonded crystals can form upon solidification of salts, either from a molten fluid or upon crystallization from a solution. Covalently bonded crystals are also very common, notable examples being diamond, silica, and graphite. Polymer materials generally will form crystalline regions, but the lengths of the molecules usually prevent complete crystallization. Weak van der Waals forces can also play a role in a crystal structure; for example, this type of bonding loosely holds together the hexagonal-patterned sheets in graphite.

Most crystalline materials have a variety of crystallographic defects. The types and structures of these defects may have a profound effect on the properties of the materials. 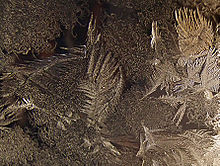 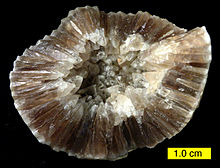 Since the initial discovery of crystal-like individual arrays of atoms that are not regularly repeated, made in 1982 by Dan Shechtman, the acceptance of the concept and the word quasicrystal have led the International Union of Crystallography to redefine the term crystal to mean "any solid having an essentially discrete diffraction diagram", thereby shifting the essential attribute of crystallinity from position space to Fourier space. Within the family of crystals one distinguishes between traditional crystals, which are periodic, or repeating, at the atomic scale, and aperiodic (incommensurate) crystals which are not. This broader definition adopted in 1996 reflects the current understanding that microscopic periodicity is a sufficient but not a necessary condition for crystals.

While the term "crystal" has a precise meaning within materials science and solid-state physics, colloquially "crystal" refers to solid objects that exhibit well-defined and often pleasing geometric shapes. In this sense of the word, many types of crystals are found in nature. The shape of these crystals is dependent on the types of molecular bonds between the atoms to determine the structure, as well as on the conditions under which they formed. Snowflakes, diamonds, and table salt are common examples of crystals.

Some crystalline materials may exhibit special electrical properties such as the ferroelectric effect or the piezoelectric effect. Additionally, light passing through a crystal is often refracted or bent in different directions, producing an array of colors; crystal optics is the study of these effects. In periodic dielectric structures a range of unique optical properties can be expected as seen in photonic crystals.

By volume and weight the largest concentrations of crystals in the earth are part the Earth's solid bedrock. Here crystals have formed by magmatic and metamorphic processes giving origin to large masses of crystalline rock. Other crystals have formed out of precipitation from fluids, commonly water, to form druses or quartz veins. Water ice in form of Snow, sea ice and glaciers are also very common occurrences of crystalline matter on earth. Many living organisms are able to produce crystals, for example calcite and aragonite in the case of most molluscs or hydroxylapatite in the case of vertebrates.

Inorganic matter, if free to take that physical state in which it is most stable, tends to crystallize. There is no practical limit to the size a crystal may attain under the right conditions, and selenite single crystals in excess of 10 m are found in the Cave of the Crystals in Naica, Mexico.[4]

Crystalline rock masses have consolidated from aqueous solution or from molten magma. The vast majority of igneous rocks belong to this group and the degree of crystallization depends primarily on the conditions under which they solidified. Such rocks as granite, which have cooled very slowly and under great pressures, have completely crystallized, but many lavas were poured out at the surface and cooled very rapidly; in this latter group a small amount of amorphous or glassy matter is frequent. Other crystalline rocks, the evaporites such as rock salt, gypsum and some limestones have been deposited from aqueous solution, mostly owing to evaporation in arid climates. Still another group, the metamorphic rocks which includes the marbles, mica-schists and quartzites; are recrystallized, that is to say, they were at first fragmental rocks, like limestone, shale and sandstone and have never been in a molten condition nor entirely in solution. The high temperature and pressure conditions of metamorphism have acted on them erasing their original structures, and inducing recrystallization in the solid state.[5]

Water-based ice in form of snow, sea ice and glaciers are very common occurrences of crystalline matter on Earth.