A crystal is a solid material whose constituent atoms, molecules, or ions are arranged in an orderly repeating pattern extending in all three spatial dimensions. Crystal growth is a major stage of a crystallization process, and consists in the addition of new atoms, ions, or polymer strings into the characteristic arrangement of a crystalline Bravais lattice. The growth typically follows an initial stage of either homogeneous or heterogeneous (surface catalyzed) nucleation, unless a "seed" crystal, purposely added to start the growth, was already present.

The action of crystal growth yields a crystalline solid whose atoms or molecules are typically close packed, with fixed positions in space relative to each other. The crystalline state of matter is characterized by a distinct structural rigidity and virtual resistance to deformation (i.e. changes of shape and/or volume). Most crystalline solids have high values both of Young's modulus and of the shear modulus of elasticity. This contrasts with most liquids or fluids, which have a low shear modulus, and typically exhibit the capacity for macroscopic viscous flow.

Crystalline solids are typically formed by cooling and solidification from the molten (or liquid) state. According to the Ehrenfest classification of first-order phase transitions, there is a discontinuous change in volume (and thus a discontinuity in the slope or first derivative with respect to temperature, dV/dT) at the melting point. Within this context, the crystal and melt are distinct phases with an interfacial discontinuity having a surface of tension with a positive surface energy. Thus, a metastable parent phase is always stable with respect to the nucleation of small embryos or droplets from a daughter phase, provided it has a positive surface of tension. Such first-order transitions must proceed by the advancement of an interfacial region whose structure and properties vary discontinuously from the parent phase.[1][2][3][4]

The process of nucleation and growth generally occurs in two different stages. In the first nucleation stage, a small nucleus containing the newly forming crystal is created. Nucleation occurs relatively slowly as the initial crystal components must impinge on each other in the correct orientation and placement for them to adhere and form the crystal. After crystal nucleation, the second stage of growth rapidly ensues. Crystal growth spreads outwards from the nucleating site. In this faster process, the elements which form the motif add to the growing crystal in a prearranged system, the crystal lattice, started in crystal nucleation. As first pointed out by Frank, perfect crystals would only grow exceedingly slowly. Real crystals grow comparatively rapidly because they contain dislocations (and other defects), which provide the necessary growth points, thus providing the necessary catalyst for structural transformation and long-range order formation.[5]

The conditions of a homogeneous environment are often approximated to but rarely ever realized. Crystal growth always involves some form of transport of matter or heat (or both). And homogeneous conditions for the transport process can only exist for spherical, cylindrical, or infinite plane surfaces. A polyhedral crystal cannot grow (remaining polyhedral) with uniform levels of supersaturation (or supercooling) over its faces. In general, the supersaturation is greatest at its corners. This refutes the assumption that the growth rate is a function of orientation and local supersaturation.

Thus, the crystal face must grow as a whole. The growth rate of the entire face is determined by the driving force (level of supersaturation) at the point of emergence of the predominant point of growth (e.g. a dislocation, a foreign particle acting as catalyst, or crystal twin). The defect-free habit face can thus resist a finite level of supersaturation without any growth at all.

Gibbs himself was the first to point out that in the growth of a perfect crystal, the first derivative of the free energy with respect to mass becomes periodically undefinable — at each time that an additional layer on the crystal face is completed. There is discontinuity in the chemical potential at each such point.

In one sense, the crystal can then be in equilibrium with environments having a range of chemical potentials. In another sense, it is not in equilibrium. There are available states of lower free energy. But any free energy barrier must be passed by a fluctuation, or nucleation process, in order to access it. The fundamental thermodynamic effect of a screw dislocation is to eliminate this discontinuity in the chemical potential, by making it impossible to ever complete a single crystal face. 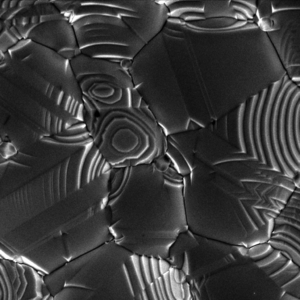 Heterogeneous nucleation can take place by several methods. Some of the most typical are small inclusions, or cuts, in the container the crystal is being grown on. This includes scratches on the sides and bottom of glassware. A common practice in crystal growing is to add a foreign substance, such as a string or a rock, to the solution, thereby providing nucleation sites for facilitating crystal growth and reducing the time to fully crystallize.

The number of nucleating sites can also be controlled in this manner. If a brand-new piece of glassware or a plastic container is used, crystals may not form because the container surface is too smooth to allow heterogeneous nucleation. On the other hand, a badly scratched container will result in many lines of small crystals. To achieve a moderate number of medium sized crystals, a container which has a few scratches works best. Likewise, adding small previously made crystals, or seed crystals, to a crystal growing project will provide nucleating sites to the solution. The addition of only one seed crystal should result in a larger single crystal.

Some important features during growth are the arrangement, the origin of growth, the interface form (important for the driving force), and the final size. When origin of growth is only in one direction for all the crystals, it can result in the material becoming very anisotropic (different properties in different directions). The interface form determines the additional free energy for each volume of crystal growth.

Lattice arrangement in metals often takes the structure of body centered cubic, face centered cubic, or hexagonal close packed. The final size of the crystal is important for mechanical properties of materials. (For example, in metals it is widely acknowledged that large crystals can stretch further due to the longer deformation path and thus lower internal stresses.). 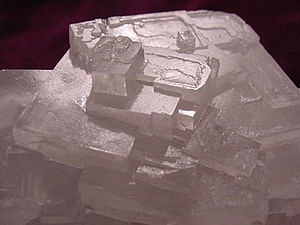 An example of the cubic crystals typical of the rock-salt structure.

Time-lapse of growth of a citric acid crystal. The video covers an area of 2.0 by 1.5 mm and was captured over 7.2 min.

The interface between a crystal and its vapor can be molecularly sharp at temperatures well below the melting point. An ideal crystalline surface grows by the spreading of single layers, or equivalently, by the lateral advance of the growth steps bounding the layers. For perceptible growth rates, this mechanism requires a finite driving force (or degree of supercooling) in order to lower the nucleation barrier sufficiently for nucleation to occur by means of thermal fluctuations.[6] In the theory of crystal growth from the melt, Burton and Cabrera have distinguished between two major mechanisms:[7][8]

Non-uniform lateral growth is a geometrical motion of steps — as opposed to motion of the entire surface normal to itself. Alternatively, uniform normal growth is based on the time sequence of an element of surface. In this mode, there is no motion or change except when a step passes via a continual change. The prediction of which mechanism will be operative under any set of given conditions is fundamental to the understanding of crystal growth. Two criteria have been used to make this prediction:

Consider next the necessary requirements for the appearance of lateral growth. It is evident that the lateral growth mechanism will be found when any area in the surface can reach a metastable equilibrium in the presence of a driving force. It will then tend to remain in such an equilibrium configuration until the passage of a step. Afterward, the configuration will be identical except that each part of the step but will have advanced by the step height. If the surface cannot reach equilibrium in the presence of a driving force, then it will continue to advance without waiting for the lateral motion of steps.

Thus, Cahn concluded that the distinguishing feature is the ability of the surface to reach an equilibrium state in the presence of the driving force. He also concluded that for every surface or interface in a crystalline medium, there exists a critical driving force, which, if exceeded, will enable the surface or interface to advance normal to itself, and, if not exceeded, will require the lateral growth mechanism.

Note that in a typical solidification or crystallization process, the thermodynamic driving force is dictated by the degree of supercooling. 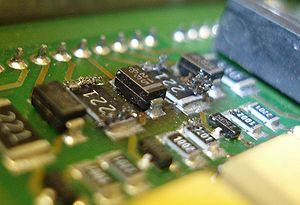 It is generally believed that the mechanical and other properties of the crystal are also pertinent the subject matter, and that crystal morphology provides the missing link between growth kinetics and physical properties. The necessary thermodynamic apparatus was provided by Gibbs study of heterogeneous equilibrium. He provided us with the clear definition of surface energy, by which the concept of surface tension is made applicable to solids as well as liquids. He also appreciated that an anisotropic surface free energy implied a non-spherical equilibrium shape, which should be thermodynamically defined as the shape which minimizes the total surface free energy.[12]

It may be instructional to note that whisker growth provides the link between the mechanical phenomenon of high strength in whiskers and the various growth mechanisms which are responsible for their fibrous morphologies. (Prior to the discovery of carbon nanotubes, single-crystal whiskers had the highest tensile strength of any materials known). Some mechanisms produce defect-free whiskers, while others may have single screw dislocations along the main axis of growth — producing high strength whiskers.

The mechanism behind whisker growth is not well understood, but seems to be encouraged by compressive mechanical stresses including mechanically induced stresses, stresses induced by diffusion of different elements, and thermally induced stresses. Metal whiskers differ from metallic dendrites in several respects. Dendrites are fern-shaped like the branches of a tree, and grow across the surface of the metal. In contrast, whiskers are fibrous and project at a right angle to the surface of growth, or substrate. 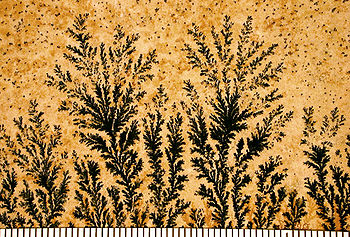 Manganese dendrites on a limestone bedding plane from Solnhofen, Germany. Scale in mm.

Very commonly when the supersaturation (or degree of supercooling) is high, and sometimes even when it is not high, growth kinetics may be diffusion-controlled. Under such conditions, the polyhedral crystal form will be unstable, it will sprout protrusions at its corners and edges where the degree of supersaturation is at its highest level. The tips of these protrusions will clearly be the points of highest supersaturation. It is generally believed that the protrusion will become longer (and thinner at the tip) until the effect of interfacial free energy in raising the chemical potential slows the tip growth and maintains a constant value for the tip thickness.

In the subsequent tip-thickening process, there should be a corresponding instability of shape. Minor bumps or "bulges" should be exaggerated — and develop into rapidly growing side branches. In such an unstable (or metastable) situation, minor degrees of anisotropy should be sufficient to determine directions of significant branching and growth. The most appealing aspect of this argument, of course, is that it yields the primary morphological features of dendritic growth.